Castroneves and team wins pit challenge, Franchitti paces final practice Though Roger Penske's drivers have so far dominated practice and qualifying, it was their rivals in all red who swept the top of the timesheets in Carb Day final practice for ...

Though Roger Penske's drivers have so far dominated practice and qualifying, it was their rivals in all red who swept the top of the timesheets in Carb Day final practice for Sunday's 94th Indianapolis 500. But Penske's alpha dog and crew came back with another victory in the Pit Stop Challenge later in the day. 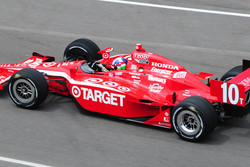 Ganassi's drivers are looking to give their eponymous team owner wins in both major 500-mile events this year, as Jamie McMurray won the Daytona 500 in February. Both trophies are here for the first time, and the two owners held a press conference this morning to share their thoughts going into Sunday's race.

Will Power ensured Penske got part of the top three at 224.993, and fourth quick, continuing his pace in short stints on track was Bruno Junqueira of the FAZZT Race Team. He was at a 224.898. Helio Castroneves, polesitter and seeker of his record-tying fourth '500 victory, second in a row, completed the top five at 224.753.

Most of the field turned installation laps right after the green flew, and the one-hour session made it through without a single interruption by yellow flags. Less than one second covered the top 32 with only Graham Rahal in the Rahal Letterman entry more than a second off the pace.

Fastest rookie of six in the field was Takuma Sato in the Lotus-liveried No. 5 for KV Racing Technology, 15th quick at 222.975 mph.

In Friday afternoon's Pit Stop Challenge, Team Penske recorded another win for Helio Castroneves and the No. 3 crew. It is Castroneves' fourth consecutive dating to 2006 (there was no competition in 2008 per a rainout) and fifth overall. Last year, he completed the triple play of wins with the pole position, Pit Stop Challenge victory and third win at the Indianapolis 500. He is two-thirds of the way there this year.

"We kind of shuffled people around this year, but we all still have everybody in sync," said Castroneves, noting that longtime crew chief Rick Rinaman now works primarily out of Penske's race shop in Mooresville, N.C. "But I'm so honored to be working with this organization and these guys, and I will rely on them."

Tim Cindric, president of Penske Racing, suggested delivering a message to new IMS CEO Jeff Belskus that the Speedway should bring back trophies for the winning crewmembers.

"Watching guys hoist the trophy way back was a big deal," Cindric said. "Each one of these guys deserves a trophy. We spend the money, but always keep the trophy."

Penske was the only one of the two IndyCar powerhouses to have a car advance through the levels of the Pit Stop Challenge. Ganassi's team still has never won the Carb Day event, and on Friday both crews for Dixon and Franchitti had their cars knocked out in the first round.

Two of Penske's three guns bit the bullet in the quarterfinals. Patrick's crew defeated Power's -- the crowd waited with anticipation to see whether she would in fact thank her crew for the efforts -- and Hideki Mutoh's underrated, underappreciated Newman/Haas Racing crew knocked out Ryan Briscoe's.

It was smooth sailing for Castroneves through three rounds, thanks in large part to his entry and exit launch speed, stopping the clocks with the fastest time of the competition of 7.891 in the semifinals. Mutoh continued his impressive run with a win over Justin Wilson in the semifinals, to advance to take on Castroneves in the finals.

Another quick stop, Castroneves in and out with a time just a fraction more than 8 seconds, 8.001, handily took out Mutoh's crew. Still, this was a valiant effort from the Japanese driver in his first Pit Stop Challenge and the crew who pledged to "go big or go home." By day's end, they'd done both.

To top off the day, rock legends ZZ Top (pun completely intended) played the annual Carb Day concert to a packed house at the stage just west of turn 2, with a throng of fans in sunglasses -- some of them cheap -- to witness the festivities.