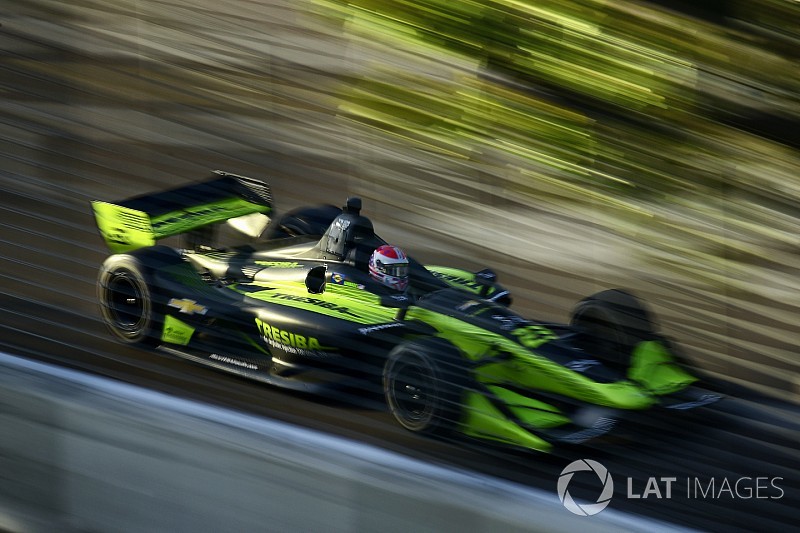 Charlie Kimball says that Carlin's first race in the 2018 IndyCar series was disappointing because the team should be fighting for podiums, but Max Chilton said it was an acceptable first showing.

Kimball and teammate Max Chilton were classified 19th and 20th at St Petersburg, finishing two and three laps down respectively.

The former Chip Ganassi Racing drivers were caught up in incidents with Kimball going off the track at Turn 13 and Chilton causing a late full-course yellow after he collided with a tyre wall and stalled at Turn 9.

While Kimball says Carlin will have learned huge amounts from its first race, he reckons it was still a difficult weekend.

"Honestly it was a disappointing day results-wise," he said. "At Carlin, you don't come to the track to finish 19th and 20th, our goal really is to be fighting for race wins and podiums.

"We came into this weekend with limited knowledge and experience in the series, but I'd say we probably doubled or even tripled our knowledge on the IndyCars here in St. Pete. I'm looking forward to going back and getting with the engineers, learning, digesting, and figuring out what we need to do in the future.

"We've got a couple of tests before the Phoenix race and we tested there a few weeks back, so I know that we'll be more competitive at the next race and continue to work our way forward."

Chilton was more positive than his teammate, believing it was a competent showing for the team.

"It was a long hard race," he said. "I think it was around two hours and 20 minutes and there were probably six or seven yellows, so it was really hard to keep our tires up to temperature which was something we were struggling with all day.

“When the tires were in, we had good performance so we made gains throughout the weekend.

Considering this was Carlin's first IndyCar race, I'd say it wasn't a bad showing at all. We definitely have work to do and we aren't where we want to be yet. [But] I think all-around we did a good job and we'll make sure we're ready for Phoenix."