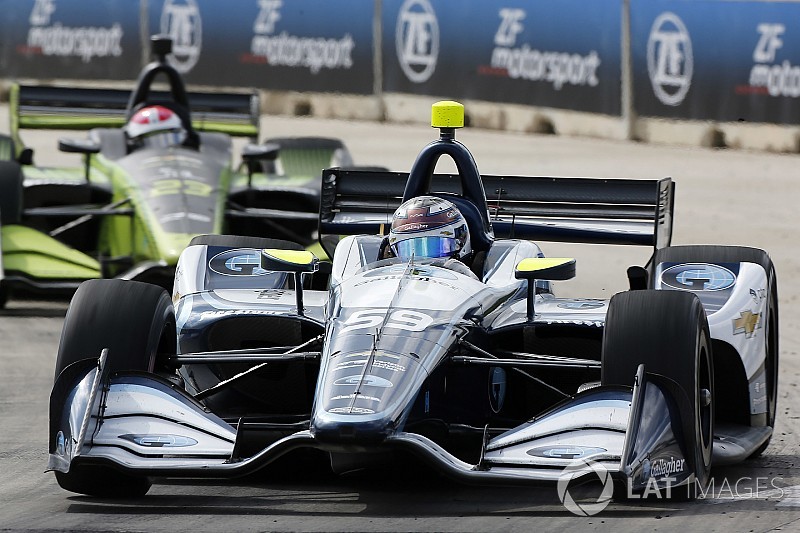 Trevor Carlin says his team’s gradual improvements in the opening half of its first IndyCar season have left him proud of not only his drivers but also the pitcrews.

Although Charlie Kimball and Max Chilton lie only 19th and 21st in the championship, the squad’s rapid improvement in performance saw Chilton qualify 10th for the second Detroit race last week, while Kimball finished the race in eighth – ahead of two Penske-Chevrolets.

Carlin told Motorsport.com: “Yeah, that was race 8 of the season and I’d say we had our best weekend, but we’ve still got a long way to go, and to a degree it was circumstances that we beat two Penskes. But yeah, they’re a formidable organization with three great drivers so I’d say our team did a great job to be competitive with them. We’re at least in the game, and that’s satisfying.

“We’re not just here to be here, or just to beat Penske – our target is to eventually be able to beat everybody. But for sure, Team Penske is a good yardstick, particularly from a Chevrolet point of view.”

He observed: “Indy Lights don’t race at Detroit so in our three years here [in the U.S.] we’d never been there before. First time we go there, we roll off the truck, we’re pretty quick, based entirely on research our engineers had done. Max was running top four in free practice – legitimately fast, without running light on fuel.

“But in the same weekend, we’re running F3 at the Hungaroring – and we’ve been doing F3 for 20 years – and our cars were bloody diabolical! I mean, it’s such a knife-edge in terms of getting the setup right, especially in a spec series. We just square missed it. So I suspect some of the better IndyCar teams got it wrong in Detroit, which is especially easy with a new aerokit. Eventually you can catch up but maybe not until after qualifying, and by then you’ve got to dig yourself out of a whole which is hard to do if there aren’t any yellows for you to mess around with strategy.”

Carlin also defended Chevrolet, which has often struggled with ultimate pace around the 2.35-mile Belle Isle course compared with Honda, believed to be due to the Ilmor-built unit lacking torque at the very low end of the rev range.

“Actually, we only found that out last Friday,” laughed Carlin, “nobody warned us! But actually, yeah, although Honda were all at the top of the times, I just assumed those teams had got their setups right, I didn’t even consider the engines at first, because Chevy have been fantastic to us, great partners, with a good engine for most tracks. In fact to be brutally honest, on any given weekend, the powertrain is the least of my worries. I’m not sure we’d have been any further up the grid if we’d used Hondas. And I suspect this weekend we’ll be nearer the front because we run Chevys. So no, no complaints there whatsoever.”

The plan to run a two-stop strategy for both cars went by the wayside early on in the second Detroit race, and they switched to three stops in order to get off the alternate (red) Firestones which most teams had found difficult to preserve for a whole stint. While observing from the pitwall, Carlin said he was impressed with both the #23 and the #59 pitcrews.

“We had genuine speed that race, so that was very encouraging,” he said, “but I was also really happy with the pitstops. They weren’t fab on Saturday for a couple of reasons, mainly the fueling side of things, but on Sunday they were brilliant. The tire guys always beat the fueler, the fuel went in perfectly, it was all smooth and slick. Not the absolute fastest, but all safe and secure, and I think we’re the only team so far this year that hasn’t had a monetary fine or penalty for hitting equipment or hitting crew members.

“I may have just jinxed us – we may have a massive balls-up in the pits in Texas now! But no, seriously, the pressure and stress they’re under and the speed of what they’re doing, then if you get 1 in 10 wrong, it’s understandable, and I think our guys are better than that. They’re more confident, more relaxed. I’m really proud of them.”