Carlin IndyCar drivers “surprised by how sketchy the cars are” 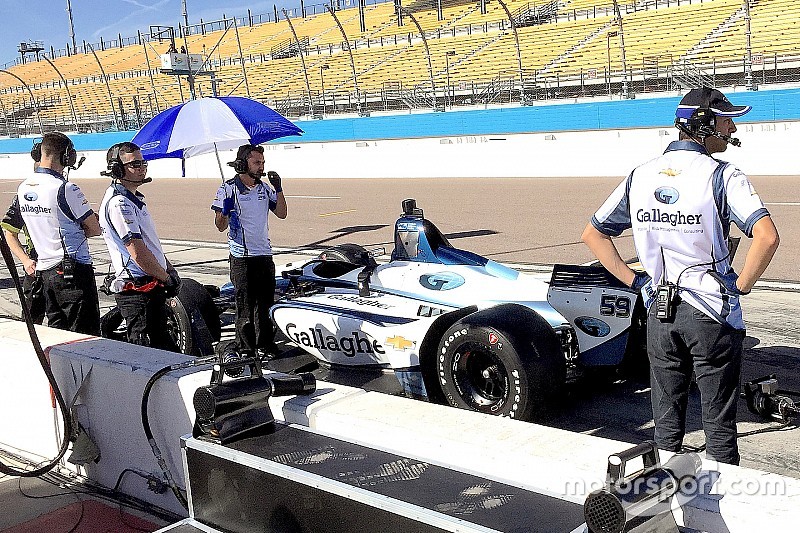 Despite suffering electrical gremlins, Trevor Carlin says his team is satisfied with its first day of testing an IndyCar on an oval – but said Charlie Kimball and Max Chilton were “shocked” by the reduced downforce from the new aerokits.

Across Friday’s two sessions at the 1.022-mile oval ISM Raceway in Phoenix, Charlie Kimball and Max Chilton amassed 102 and 129 laps respectively. They ended the last session in 15th and 18th places, their best laps approximately 0.5sec-0.6sec slower than the pace-setting Graham Rahal.

“It was all right in the end,” Trevor Carlin told Motorsport.com. “We had the ‘traditional’ software gremlins like everyone seems to have done in testing. Problem is because we’re new to all this, we don’t know if it’s us screwing things up, or if it’s Cosworth. But to their credit Cosworth seems to be taking the blame so we’ll go with that!

“Anyway, once we got that sorted in the first session, the second session ran really smoothly.”

But Carlin said that despite their experience in the series with Chip Ganassi Racing – seven years for Kimball, two for Chilton – both drivers had been startled by the handling characteristics induced by the new aerokit.

“It was a bit of a shock for them, their first time on an oval with these cars,” he said. “They’d heard all about the 40 percent loss of downforce but didn’t realize the cars would still be so quick – roughly the same lap times as last year, but with a different way of making that speed. I think they were surprised by how sketchy the cars are. You can’t carry as much speed in, so you’re starting the corner sooner, getting the work done earlier.”

“So we started off with a baseline and then started the fine-tuning, and I think we made a bit of progress. Ended up half a second off the fastest time, so yeah, we’ll take that for our first oval test in IndyCar. It’s like any championship when you first come in – you turn up, get a feel for the cars, and then start getting yourselves competitive. That’s our next step.”

Carlin also praised the quality of the main components of the car.

“The build quality is super,” he said. “The front part of the car, in concept, is almost exactly the same as Dallara’s IL15 [Indy Lights car], and then the rest of it is really well put together. Great gearbox from Xtrac.

“And then a fantastic engine – Chevy and Ilmor have done a lovely installation, too. And although we’re new boys here, they couldn’t be more professional, and they’re working really well with us. Yeah, those guys are really switched on.”