Carlos Munoz has had a busy week leading up to Sunday’s Indianapolis 500.

Carlos Munoz will "do the double" this Memorial Day weekend.

Munoz placed fourth in the Freedom 100 on Carb Day Friday 24th, joining three other drivers in the closest blanket finish ever seen at Indianapolis Motor Speedway--maybe in racing generally--suffering a loss by the incredibly slim margin of 0.0026 seconds.

"With two laps to go (and battling for the lead of the race)," Munoz said, "I knew it was going to be trouble on the last lap here. I was flat out on the throttle, but really couldn't do anything." 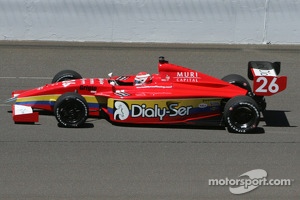 Munoz surrendered the lead to eventual winner and pole-sitter Sage Karam as the top finishers of the Freedom 100 roared down the front straight at Indy four abreast.

The youngest rookie in the Indianapolis 500 at 21 years of age, Munoz will begin the Greatest Spectacle in Racing this coming Sunday on the front row, in the middle, on the strength of a 228.342 mph qualification speed.

Despite a relative lack of experience on the huge 2.5 mile oval Brickyard, Munoz figures to challenge for the lead and even the race win on Memorial Day. "I don't have much experience here," he said, "but the extra hundred miles today will help in the 500."

Adaptation from the less-powerful Indy Lights machine to the IndyCar Dallara DW12/Honda has come fairly easily for Munoz. "Both cars demand concentration," he said. "It is not hard to lose focus on a lengthy run of 40 laps (100 miles), but I never lost my concentration during the Freedom 100 race."

The Bogota, Colombia driver pilots an Andretti Autosport car in both the Indy Lights and the IndyCar series. Needless to say he does both very, very well.

"I have learned a lot from the series," he said of his Indy Lights season. "Things like how to find clean air to drive in, timing for passing another car and so forth."

Munoz isn't the only former "Fastest Rookie" to qualify for the 500. He will be joined on the grid by Marco Andretti, JR Hildebrand, Tony Kanaan, Scott Dixon and Josef Newgarden in that distinction.

Everyone loves a parade