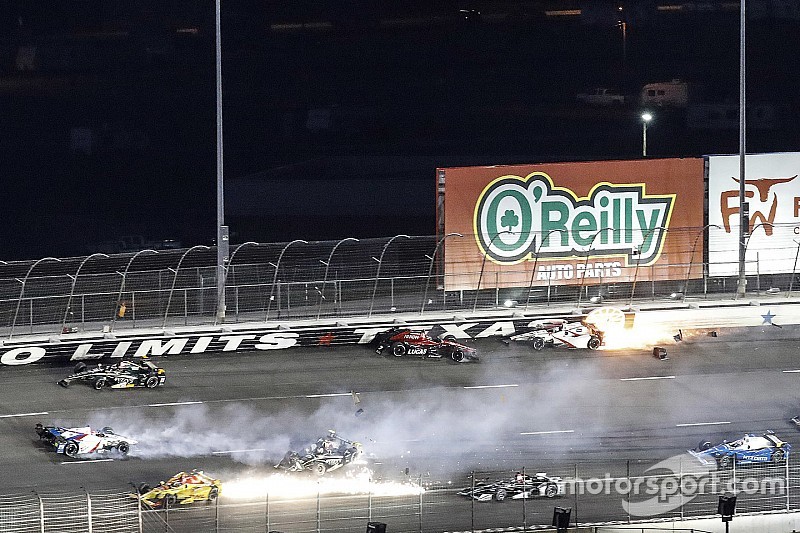 IndyCar’s only owner/driver saw the cars of himself and teammate JR Hildebrand torn up in the eight-car shunt on Lap 152, before rejoining several laps down and salvaging 11th and 12th place. But Carpenter says that the RainGuard Water Sealers 600, which saw only six healthy cars finish on the lead lap, would not have featured so much carnage had drivers not been allowed to move their cars around so much.

“I don’t think the type of racing that was the problem,” Carpenter told Motorsport.com. “It was the moments here and there that caused issues.

“Back when we ran more oval races prior to 2012, the rules were a little bit different with regards to blocking and there wasn’t language about being able to move proactively but not reactively. You just weren’t allowed to do that at all.

“So I feel that if we simplified the rules and eliminated blocking from oval racing that I think it would sort out some of the problems. In my opinion, there could have been some calls made for blocking or not maintaining your lane. In the drivers’ meeting before the race, there was a lot of talk about maintaining a lane, and being disciplined to where you give other people room to race.

“The phrase ‘pack race’ gets thrown out but to me that wasn’t what I’d consider a pack race, although obviously people have different definitions. I feel like that if penalties had been called on people driving like that before that accident, it could have calmed things down. But furthermore, I think if we could home in on what the rules are for that type of racing, and define better or more simply what is or isn’t allowed, it would make it simpler for Race Control to make a call against drivers who overstep those rules.

“Give us less wriggle room to make defensive maneuvers, and take space away from the other car and you’d have much fewer incidents.”

Carpenter believes that the latest race’s critics had their views colored by the biggest shunt of the night, when Chip Ganassi Racing’s Tony Kanaan collided with James Hinchcliffe’s Schmidt Peterson Motorsports machine, sending it into a spin, with disastrous knock-on consequences.

“It’s always interesting after races like that because they can go either way,” said Carpenter. “Last year after Texas, there was a lot of talk about how exciting it was – and it was – and to me the racing wasn’t all that much different to this year. There was a little more tire dropoff, so there was a little more dropoff in overall speed from the start of a stint to the end, but I was surprised to hear so many guys describe this year’s race as a pack race.

“The track was still difficult to drive, everyone was lifting quite a bit in Turns 1 and 2 unless they had totally clean air. So I think if the big accident hadn’t happened, I feel like the tone of some of the feedback would have been different. And from a lot of things I’ve read and seen on social media, the fans seemed to enjoy the race a lot.

“So I don’t think a whole lot needs to change. Obviously teams don’t like tearing up that much equipment but at the same time we do need to make sure we’re putting on entertaining races, and I think it was entertaining. So now is not the time to overreact and change everything, although there will be changes for next year because the cars will change.”

Carpenter won the 2014 IndyCar race at Texas Motor Speedway, on a night when tires degraded heavily over the course of a stint, and he and 2017 winner Will Power proved the only drivers able to minimize this. Despite a far greater degree of separation between the cars, afterward there were few complaints that the race wasn’t exciting. However, Carpenter says that returning to that technical package isn’t easy.

“I don’t know that there’s a proven formula where we can say, ‘We need to do this with the tire, we need to do this with the aero,’” he commented. “Texas Motor Speedway did a really nice job with the reconfiguration and with the repaving. The track is more challenging, there’s a bigger balance difference between the two ends of the track. But any time there’s new asphalt, when you do get rubber down and it does grip up, it is harder to get that tire fall-off. The tires aren’t worked as hard. Similar problem at Phoenix; the tires just don’t fall off.

“Like I say, I don’t think that’s the main problem. I think the basic tone coming out of the race shouldn’t be a negative one; it was exciting racing. It was just that one big accident that ruined the night for some teams and drivers.”