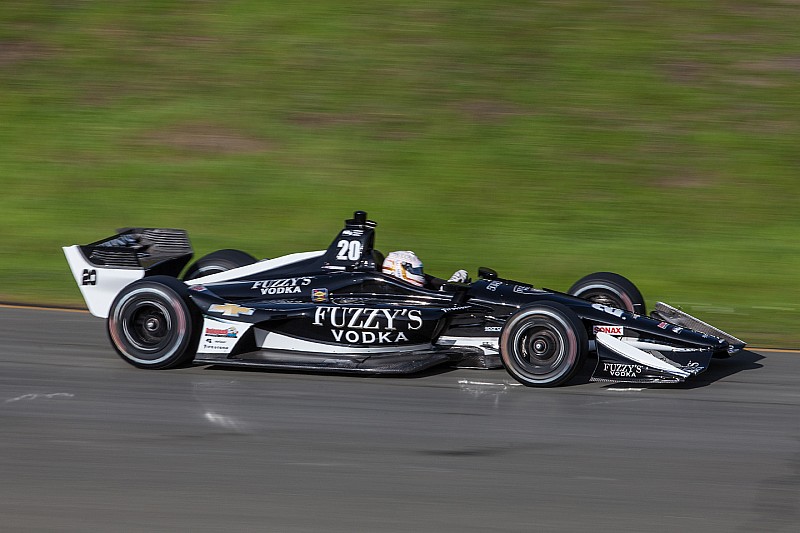 Team owner Ed Carpenter said he was impressed by Jordan King on his first day of testing with his team at Sonoma, and has confirmed the Briton will make his oval debut on Sunday at Phoenix.

Formula 2 race-winner King, who will drive the #20 Ed Carpenter Racing-Chevrolet at the road and street course races in the IndyCar schedule in 2018, made his test debut at Sonoma Raceway on Monday and ended up eighth fastest of the 12 cars present.

Although the times were unofficial and few teams were able to compare like with like regarding their drivers, King ended the day 0.2sec faster than fulltime ECR driver Spencer Pigot.

Carpenter, the only fulltime team owner/driver in IndyCar, will continue to pilot the #20 ECR car for the ovals, and he admitted King had impressed him.

“I was really happy with Jordan,” Carpenter told Motorsport.com. “We have some work to do as a team, but from the first-impression standpoint, Jordan drove well today, so I feel very encouraged by what he’ll bring to the team.”

Carpenter, a two-time pole-winner for the Indy 500 who also scored three IndyCar wins 2011-’14, said he is fully backing King’s intentions, as told to Motorsport.com last week, in gunning for a fulltime IndyCar ride in 2019.

“After the Phoenix Open Test on Friday and Saturday this week, we will stay on and test Jordan the day after,” said Carpenter. “He won’t be taking part in the rookie oval test on Thursday, but we’ll have him there watching and learning for three days and then we’ll run him Sunday.”

Carpenter was non-committal regarding King’s chances of running in this year’s Indianapolis 500.

King said his IndyCar baptism had been satisfactory, following his first day of testing.

“There’s a lot to learn but it was really good,” he told Motorsport.com. “Our program was a bit affected by problems with the track this morning, so we really had to cram it all in after that. We had a few issues, but nothing you wouldn’t expect on the first day of running in the off-season.

“For me, it was very positive though. The speed seemed all right – there or thereabouts – and I pushed the guys on some car changes.”

Regarding the integration of his and Pigot’s feedback, King said: “Yes, we had different plans for the test, but by the end of the day, we merged and came up with something we felt was mutually good.

“There’s still a lot of analyzing to do, but what we’ve learned in the workshop and on the simulations is good and tallies with what we learned on track.”

King admitted that his perception of the cars with their new universal aerokits wouldn’t yet tally with that of Pigot, who ended the test downbeat.

“The thing is, Spencer knows where the car should be,” said King, “but I’m just going, ‘I need this from the car.’ I suppose for him, he’s saying, ‘The car should be doing this,’ whereas I’m looking at how to make it suit me.”

Although the bold dark green, silver and white colorschemes have become synonymous with Ed Carpenter Racing over the past five years, ECR has chosen to break with tradition to run a green-and-white color scheme on Pigot’s #21 car and a black and white on the #20.

Explaining this decision, Carpenter stated: “We’d talked about doing this before, but it just never really lined up with what we wanted and what Fuzzy’s envisioned.

“But this year they wanted to mix it up and they’ve got some cool stuff coming – and for sure it makes our drivers easier to pick out.”

Regarding Preferred Freezer Services sponsorship, which is often involved with the ECR team for Indy 500 and beyond, Carpenter said the company “should be” returning this season.