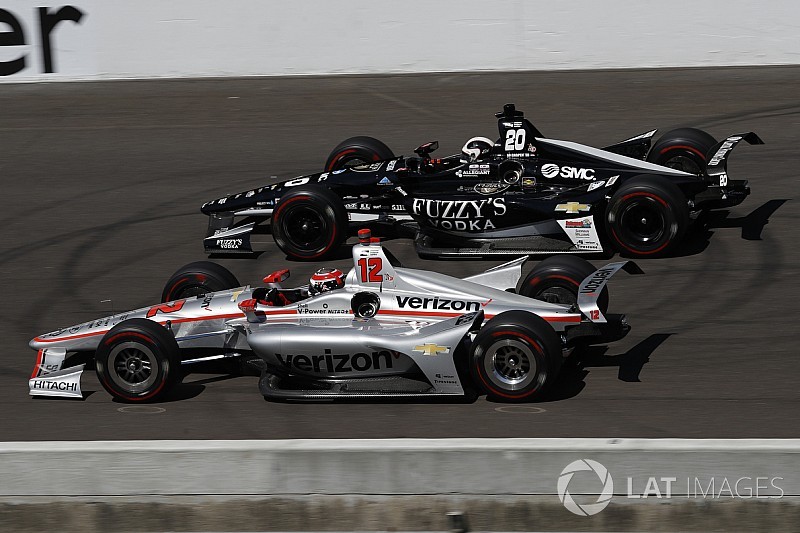 Indianapolis 500 runner-up Ed Carpenter says he wishes he’d attacked Will Power on a restart, which was his only realistic chance of stopping him from winning the 102nd running of the event.

Carpenter scored his best-ever Indy 500 finish, beating his fifth position in 2008, having started the race on pole and leading convincingly in the first half of the race. He then fell behind Power, but passed up a chance to attack after the yellow for Sebastien Bourdais’s crash.

“We lost the lead in one of the pit sequences, so we’ll have to look at the data and if I had a bad in-lap,” he said. “Thought the guys’ stops were great, the whole time. There was one out-lap where I caught a weird string of traffic, and that’s all it takes.

“Track position was so critical. Late into the race, everyone was saving fuel, and the guys were telling me that Will and Simon [Pagenaud] were running a lap better than me at that point.

“The first restart I had behind him I had a good run, I think I could have passed him, and I was like ‘I’ll just sit here and save fuel’ and work on him on the exchange. And then we got all those yellows. Then it made it not a fuel race any more.

“So that’s the one moment in hindsight that I kick myself, but at the moment it seemed like the right decision. But in hindsight, I shoulda just taken an opportunity at track position and worry about fuel after the fact.”

Power dominated the final stages of the race, once those taking a fuel strategy gamble had pitted or backed off to save fuel to make the finish – the strongest of which was Scott Dixon.

“In a couple of days I’ll feel better about this finish,” added Carpenter. “I’m still extremely proud of the entire Ed Carpenter Racing team. We were one of the two most consistent guys, day-in, day-out. Wish my teammates coulda been up there more as well, but it’s been a while since I had a top five here, so feels good to finish in a good position.

“Really happy for Will, he and I talk quite a bit for competitors. When he first came here after unification he hated ovals, and now he loves ’em. He and I love racing together… Some day he might drive for me!”