IndyCar team owner Ed Carpenter says that his team’s tie-up with Scuderia Corsa is something he hopes will continue in 2020, but it’s as yet unclear who will be sharing the driving duties with him in the #20 ECR-Chevrolet. 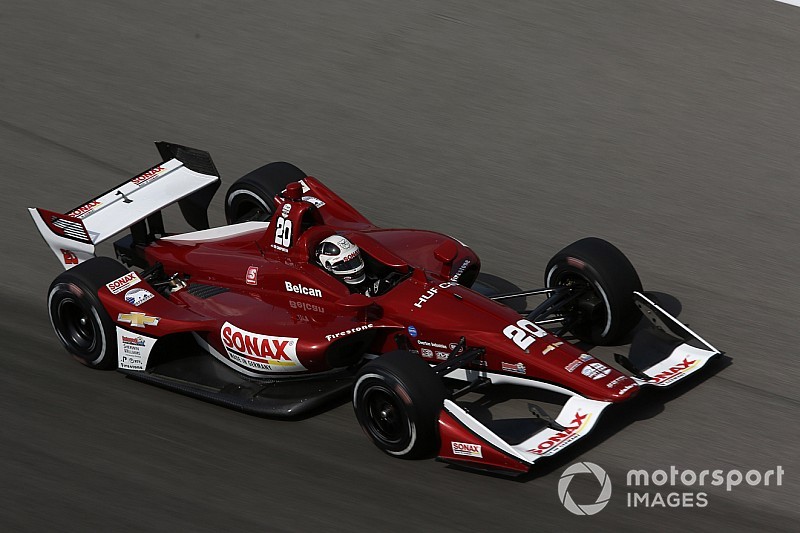 While Ed Carpenter Racing has an option on Spencer Pigot, who he first hired in June 2016, Ed Jones’ position in the #20 car – which has Scuderia Corsa as a co-entrant and in which Jones competes only on road and street courses plus the Indy 500 – is less assured.

Carpenter told Motorsport.com: “We have an option on Spencer and he’s been a valuable part of the team. It’s now our fourth year together, and we still believe in his potential. We’ve got to work out the final details but all those conversations are happening.”

Regarding Jones, who joined the team at the start of this year from Ganassi, Carpenter added: “I think the main problem is that we’ve been up and down as a team this year and I think Ed has shown really well at places. But there have been other places where we’ve been disappointed, he’s been disappointed.

“I don’t think the door is closed on anything at this point. We haven’t fully had the conversations yet, but I don’t have a closed mind regarding Ed. I think he’s a talented racecar driver and it takes time to get used to everyone’s tendencies.”

Last weekend at Gateway’s World Wide Technology Raceway, Carpenter – who competes only on ovals – was an ultra-close second to winner Takuma Sato, delivering the #20 car’s best result since the 2018 Indy 500. He said that finding a driver who wants to share the car with him – perhaps a European-trained driver who doesn’t wish to race ovals – is no easier than finding a driver for a whole season.

“With the #20 car being split, that’s a unique situation, and that makes us more on the quiet side of the silly season,” he commented. “This time of year you get calls from some who you expect, some who you don’t expect. I think we get more calls from over here, people that we know, rather than people who we don’t know from Europe. I don’t have a ton of contacts over there.

“Honestly I’ve got the impression that most people who come over here want to experience it all and so I think that’s why it’s  been quite difficult to find drivers who want to share the #20. Plus the possibility of us running a third car for that driver in the Indy 500 always winds up being part of that conversation too.

“I will say I’ve been pleased with the quality of people who have contacted us, though. It’s been interesting.”

From the start of the 2019 season, the #20 car has been co-entered by Ed Carpenter Racing and the highly regarded Scuderia Corsa sportscar team, set up by Giacomo Mattioli and Art Zafiropoulo in 2012. Carpenter is hoping that partnership continues.

“I believe it will,” he said. “We’re having those conversations now with Giacomo, so I think we’ll continue, but it wasn’t a multi-year deal when we started, it was only a ‘one year, let’s see how this goes,’ sort of thing.

“I feel like we have a really good relationship and trust one another. I think we both have the same intention to carry that relationship forward. Whether it will be entirely the same, I don’t know. We have more discussions coming up soon.”

Carpenter, whose team will be staying Chevrolet powered – “it’s been a great partnership” – said he is open to technical partnerships and expansion to three cars but suggested it was unlikely in this off-season.

“We would have to find the funding to do that, and we don’t have that at the moment,” he said. “It’s not something I’m set against: if an opportunity came along to add a third car, we’d certainly be willing to have that conversation. It comes down to whether we believe that adding an extra car would not just expand the program but actually make it stronger.

“It’s the same with technical partnerships. We’ve had conversations over the years, it’s got to be the right situation, the right collaboration of people and drivers to make it mutually beneficial.

“Honestly though, It’s not something I’m continually seeking out. We work hard to improve every offseason on our own program and that’s our primary goal. A different set of circumstances could pop up but I don’t know if there’s anything like that on the horizon for us right now.”