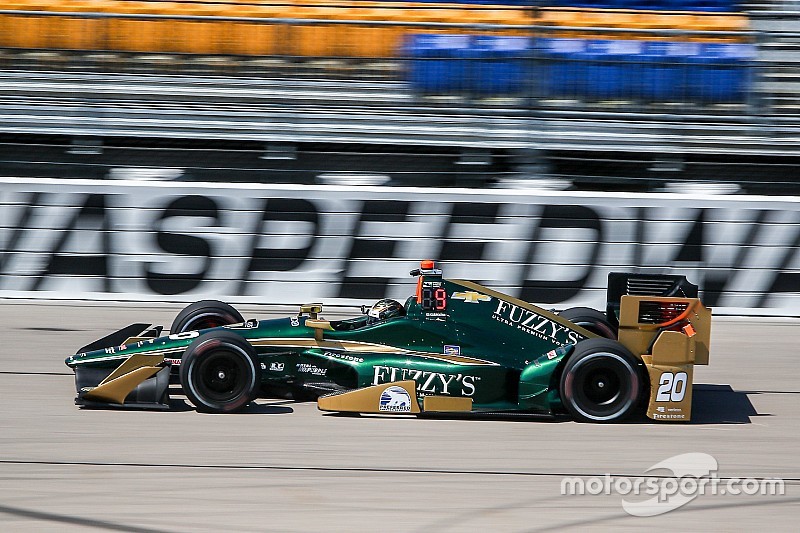 Ed Carpenter says he approves IndyCar’s efforts to maintain date equity from year to year, but would like the series to visit more ovals in the future.

Carpenter, the only owner/driver within the Verizon IndyCar Series, has three oval wins to his name, and quit road/street course driving at the end of 2013. Since then he has shared his #20 car with Mike Conway (who scored two wins in 2014), Luca Filippi and Spencer Pigot.

The two-time Indy 500 polesitter told media:“I really like what IndyCar, Mark Miles, Jay [Frye] and the entire team have been doing with the schedule. Really it was a change of pace a little bit when we condensed things and took that approach. But I think it is paying off.

“We're getting more continuity with our dates and events, and adding venues that seem committed and want to be with us. I like the approach. “Obviously Phoenix coming back last year was really nice. It's a racetrack that everyone loves going to. We're excited about St. Louis [Gateway] coming on [in 2017]. I think it's going to be a really fun race. It's a great track to drive.

However, listing the places he would like to see return to the schedule, Carpenter included Kentucky Speedway, where he scored his first win in IndyCar’s last race there in 2011, Chicagoland Speedway which IndyCar last visited that same year, and the Milwaukee Mile, which fell off the schedule this year.

“Kentucky was a place that I always enjoyed going to,” said Carpenter. “It's been repaved. It would be interesting to see what we look like there now. Milwaukee is always interesting. It's sad that we’re not there. I guess there's reasons for that. [And] I think Chicago would be a fun place to go.”

On the road course side, Carpenter, mentioned Mazda Raceway Laguna Seca but threw his support behind the series’ return to Watkins Glen, which was hastily brought in as a replacement for the stillborn Labor Day race to be held on the streets of Boston.

Said Carpenter: “Watkins Glen was a great addition, with what happened with Boston last season. I think Watkins will be a stronger event than Boston probably ever would have been. That's one that we're happy to see wasn't just kind of a one-year fix.

“I think the big thing is having that continuity and building the events we have, making those strong, and then selectively looking at how to expand the schedule and make it even stronger.

“I think the team at IndyCar is doing a really nice job.”