What is going on with inspections and penalties in IndyCar?

What the devil is going on in IndyCar with all these penalties and probations and suspensions?

Yeah, I get that you can't change your engine before its "Use by" date. And yes I understand why you don't want drivers, who are role models for many of us big kids and little ones alike, to refrain from acting out like 1990's Sting in the wrestling ring.

But what is this about the winner of an IndyCar Series race cheating--running an illegal rear wing spec at one of the fastest tracks on the schedule--getting a slap on the wrist and keeping all the points he unfairly earned in Texas towards the IndyCar Series championship?

What gives with IndyCar officiating these days?

Don't get me wrong, Helio Castroneves: I am one of your biggest fans. You are consistently fast and race clean. You dance much better than I ever will. You are a legend in your own time with three extraordinary wins at the Indianapolis 500. And your PR lady is hot, hot, hot (Hi Andrea!). 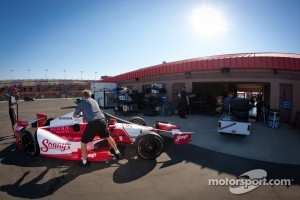 But how in the world do you let Mr. Castroneves hold onto the points earned, not to mention the IndyCar Series championship points lead, when they cheated?

Something is wrong in the Lone Star state, Horatio (as Willie Shakespeare should have penned).

IndyCar, in a press release on Tuesday, advised the world that the No. 3 Team Penske car driven by entrant Castroneves was fined 15 points and docked $35,000 for violating Rule 14.6.6.14 in last Saturday night's Firestone 500 Texas Motor Speedway IndyCar Series event.

Yet, despite these penalties, Castroneves remaisn at the top of the IndyCar Series championship point standings, still seven points (259 points total year-to-date) ahead of second-place Marco Andretti whom we presume raced fairly and within the rules on the day of the event while totaling 237 total points this year to date.

Plus, he gets to keep that cool guitar.

Some clever damage control by Team Penske principal Tim Cindric cited a quick trip to the wind tunnel on Monday that revealed (according to the Penske camp) that Helio actually suffered a competitive disadvantage by running an illegal rear wing diffuser configuration (7.575 inches of exit diffuser height rather than a spec-legal 7.600 inches). Cindric went on to explain that the mishap was the result of a crew member not tightening the rear wing restraining bolts properly.

"Obviously we are very disappointed that the car did not pass post-race inspection after Saturday's race at Texas," said Cindric. "The rule in question states that the (rear wing) diffuser exit must measure 7.600 (inches). After the race, ours was 7.575 inches because we neglected to tighten the braces that position the rear of the diffuser following pre-race inspection."

Within minutes, Helio himself was on Twitter doling out the same dismissals. "Shocking news (about he underwing)," he said. "Our guys did an amazing job and we won in spite of not going faster. Team Penske is the best." 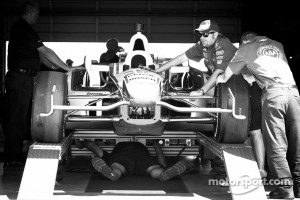 Really now. And further to that point: why do we let a sloppy team effort stand as the best IndyCar can do on a race weekend? And let the driver retain the points they won unfairly to hold the lead against another competitor who performed according to Hoyle?

Consider this: a racer demolishes the field by nearly 5 seconds on a track known for its tight finishes--indeed, some of the closest finishes in IndyCar history and involving split-seconds of winning margins have occurred on the 1.5 mile oval just north of the the Dallas/Fort Worth metroplex--and we are to believe that the wing advantage enjoyed by Helio was insignificant?

That's a tough pill to swallow.

In recent weeks, IndyCar has punished Sebastian Bourdais (one of the best race car drivers of his generation) by putting him on probation through the end of the 2013 season for a comments about officiating that were (in the opinion of many observors) fully justified.

It's done the same with one of its most important and consistent competitors, Will Power (also of Team Penske) in the field, week-in and week-out, for an emotional outburst that sent driving gloves into the ether.

It's pushed honestly qualifying entrants (Simona De Silvestro, rookie Tristan Vautier and veteran Simon Pagenaud) ten spots rearward on the grid for replacing stressed-out Honda engines that can't cut the mustard against Chevy power to begin with, further insuring that driver and team are non-competitive also-rans in both Detroit and Texas.

If the world were fair, which it is most definitely not, Castroneves' and Team Penske's unfair advantage would have been met with a huge reduction in points for both parties; and a stern admonition against sloppy technique in the garages housing the world's fastest race cars. Perhaps a stiff grid-spot penalty and forfeiture of the race win at Texas would have been in order.

There's no doubt that Castroneves and his team owner will contest the findings of the technical inspection within their rights to do so under due-process in IndyCar Series' administrative system of discipline and adjudication.

And when they do, someone needs to stand up and state loudly and clearly that cheating (intentional or not) is not permissible in big-time, high-stakes auto racing.

The State of IndyCar with Paul Tracy