Early birthday prize to Castroneves: $100,000 Indy pole Gusting winds up to 31 miles per hour on Saturday failed to deter Helio Castroneves from capturing the pole position for May 24 Indianapolis 500. The two-time Indy 500 champion, who turns ...

Gusting winds up to 31 miles per hour on Saturday failed to deter Helio Castroneves from capturing the pole position for May 24 Indianapolis 500. The two-time Indy 500 champion, who turns thirty-four on Sunday, put his Team Penske No. 3 Dallara/Honda into the top spot on the scoring pylon along Indy's long front straightaway with a blazing 10-mile average of 224.864 miles per hour. By doing so he edged aside teammate Ryan Briscoe for the $100,000 prize to be the fastest. 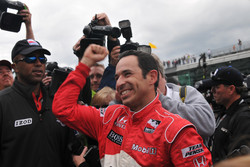 Helio Castroneves, Penske Racing gets the pole for Indy.
Photo by Andy Sallee.

"I am so thankful for Roger (Penske) and Tim (Cindric, team manager) for giving me my life back. It's amazing," said Castroneves from the infield Media Center's Economacki Press Room at Indianapolis. "We squeezed every bit of speed out of the car today."

It was Castroneves' third pole-winning effort at Indianapolis Motor Speedway, and came after the team withdrew the Brazilian's early qualifying effort at 223.949 mph.

"I have to say Ryan (Briscoe) and Will Power, they did a great job during the preseason tests, preparing the cars, as well," said Castroneves. "The entire time Team Penske we get out of the truck, basically, we didn't have to do very much. The cars were extremely strong. And we just have to continue working through the weather, working through the day and that's what we did."

Castroneves and his Aussie teammate gave Team Penske a one, two Pole Day finish today at the Brickyard with the Brazilian handed the boss his 14th pole in Indy 500 qualifying.

"It was just an unbelievable qualifying run by Helio and Team Penske. He must be on top of the world at the moment," said Briscoe. "I know I've got a good car going into this race in a couple of weeks and I just hope we can have a solid run, be at the front all day long and have a shot at winning this 500."

Briscoe's 224.083 mph average speed came late in the day when Team Penske withdrew his then-second position speed set earlier to take a crack at toppling Castroneves. The gambit failed to produce the pole position, but didn't hurt the Aussie's starting position either (in the middle of the first row). 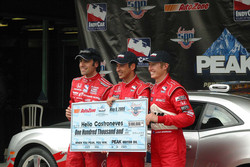 "He (Briscoe) wanted to try," said team owner Roger Penske of the decision to withdraw the second-best view of Indy's Turn 1 on Memorial Day and roll the dice one more time. "He'd been fastest all week in practice. It was worth a try."

"We could have made a mistake and it bit us," continued Penske, who has won here a record fourteen times. "But my guys are the best and when I count on them they always come through. They're the best, and that's why we're here."

Joining Castroneves and Briscoe on the outside of the front row was Chip Ganassi Racing's Dario Franchitti with his average speed of 224.010 mph over his four lap tour on the Speedway.

"We tweaked on the car back in the garage," said the clearly disappointed 2007 winner and IndyCar champion, "but we couldn't make it any faster." Franchitti who is marking his return to the series after a stint in NASCAR added, "It was a long day. It was fantastic being back and driving the car around the Indianapolis Motor Speedway. It puts a smile on my face every time."

Twenty year-old Graham Rahal, entering his second Indy 500, was fourth-quick with a four-lap average speed of 223.954 mph on his second go-round. "We knew that before (on first qualifying attempt) we weren't quite trimmed out, and there is probably still a little room to go even now, but we needed to go out there and give it another shot.

"Basically we felt we needed to go back out so we gave the McDonald's car another shot and it turned out even better than the first time and we ended up gaining two spots because right before we made our second run we were sixth. So we're pretty happy with fourth," concluded Rahal. 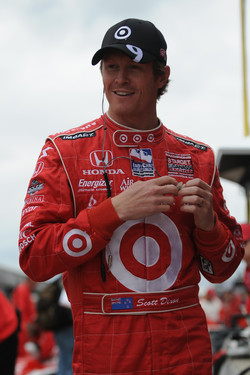 Franchitti's teammate Scott Dixon failed in his end-of-the-day attempt to better his starting spot on the inside of the second row by withdrawing a time of 223.781 and replacing it with 223.867 mph outboard of Rahal.

The reigning 500 winner and IndyCar champion said, "It was a bit of a frustrating day. It wasn't terrible. The car was consistent; we just didn't have the speed. The car has a little shine on speed now and then. Qualifying fifth is a further back than we thought we would be. We know that anything can happen here. At least the pole gives you bragging rights for a couple of weeks. We did it last year, but this was a tough day for us. They (Team Penske) are a bit ahead of us. They have been since day one."

Andretti Green Racing's Tony Kanaan continued to struggle early to find the pace with insult compounding injury when his car failed to meet minimum weight after a qualifying run in mid-afternoon. However, he returned to the track in the last hour and posted a speed of 223.612 mph in his backup car to insure sixth of the eleven spots in the starting lineup awarded today.

Diminutive fifth-year Indy 500 competitor Danica Patrick also waived an earlier qualifying time that put her (at the time) on the inside of the fourth row to take a second attempt that yielded an unimproved 222.882 mph with the same outcome.

Finally, second year man Alex Lloyd in the hot pink No. 99 car raced just ahead of the closing gun to the final qualifying spot at eleventh with a four-lap average speed of 222.622 mph for the Sam Schmidt Motorsports entry.

Several drivers including rookies Hideki Mutoh and Raphael Matos, Vision Racing veteran driver Ed Carpenter and the returning Canadian star Paul Tracy were in and then out of the field as bumping ensued over the last hour of qualifying. 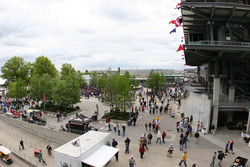 Crowds in the Pagoda area during qualifying.
Photo by Michael C. Johnson.

The brisk winds, which abated as the shadows lengthened around the Speedway, brought havoc to the plans of several well-known hopefuls to join the field on the first day of qualifying.

2005 Indy 500 winner Dan Wheldon, aboard the jungle camouflage-wrapped Panther Racing Dallara/Honda, hit the wall during open practice at approximately 2:00 PM EDT sustaining major damage to the right rear of his car. Wheldon's best result prior to the incident was a lap at 223.631 mph. Wheldon was examined and released to return to the cockpit immediately afterwards except his team was busy in the garage making repairs.

Indianapolis newcomer Nelson Philippe wiggled in Turn 1 then smacked the wall in the short chute, also during open practice near 4:00 PM. The No. 00 car suffered substantial damage to the right front and sidepod areas. Philippe was uninjured and later cleared medically to drive again.

Conditions were mild with temperatures in the sixties and cloudy skies predominating throughout the day over the 2.5 mile oval Speedway. No official attendance was announced; however, experienced observers estimated a crowd of 25,000-plus packed the stands along both sides of the main straightaway and Turn 1 to watch the six-hour long qualifying session.

Justin Wilson aboard the Dale Coyne Racing No. 18 car was first out at exactly 12:02 PM EDT, setting a mark of 220.934 mph before being disqualified for an "improper weight placement" aboard his car. Cars at Indianapolis often add ballast to various locations of the machine to improve balance and handling. 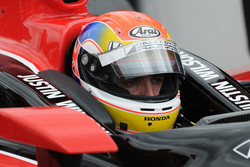 Robert Doornbos ran afoul of the windy conditions in the morning practice session, putting his Newman/Haas/Lanigan No. 06T backup car into the Turn 2 SAFER barrier along its left side and sustaining heavy damage for the second day running. The rookie driver, attempting to qualify for his first Indy 500, was cleared by medical staff to return to practice shortly afterwards.

"I have no idea (what happened.) I'm so disappointed," Doornbos said. "The guys did an amazing job getting the car ready. We had a good first outing. Everything felt good. We were just starting a run and the rear just went on me." The team will attempt to make repairs in time for a qualifying run on Sunday.

Briscoe commented on the windy conditions: "It's pretty hairy, especially today. It's very windy and as trimmed out as we are, you feel it a lot. Every corner feels different. You wouldn't think so, but it's pretty hard work out there. Every corner is distinct, especially Turn 2 today. It's a bit awkward with the tailwind going into it, and you're carrying a lot of speed and you got less downforce because the wind is behind you, so it just wants to push you out. It's pretty tricky there."

No driver came even remotely close to challenging the track qualifying record of 236.986 mph set by Arie Luyendyk in 1996.