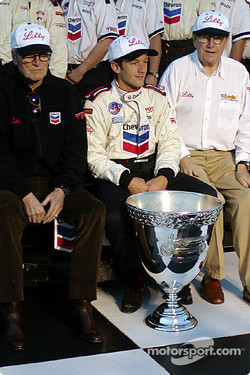 Da Matta attracted the attention of the Toyota brass with one of the most dominant CART Champ Car campaigns in recent memory, winning seven races with the Nov. 17 Gran Premio Telmex/Gigante Presented by Banamex/Visa remaining on the calendar. The Brazilian tied a CART record this season with four consecutive victories and became the first driver since Dario Franchitti in 1999 to earn 10 podium finishes in a year. The 29-year-old da Matta signed a two-year deal with the fledgling outfit and joins former BAR pilot Olivier Panis as the team's drivers. To counter da Matta's departure, Newman/Haas Racing announced that Bruno Junqueira would drive for the team in 2003.

"I have accomplished one of my goals by winning the CART driver's championship title," da Matta said. "I am very thankful to Carl Haas, Paul Newman and all of Newman/Haas Racing for the support, hard work and accomplishments that we have achieved together. Now I am ready for the next challenge."

Da Matta becomes the third CART champion to move directly to Formula 1 after winning the Champ Car title, joining Jacques Villeneuve (1995), and Alex Zanardi (1997-98) as he takes a spot with the second-year Toyota F1 effort. The move raises the total of former CART titlewinners that eventually moved to Formula 1 to five as 1999 titlist Juan Montoya joined WilliamsF1 in 2001 while 1991 CART champion Michael Andretti drove in F1 competition during the 1993 season.

"Cristiano da Matta has certainly demonstrated what it takes to win a CART championship," said CART President and CEO Christopher R. Pook. "Our championship winner truly must be a master of many different types of tracks and Cristiano has done that from the beginning of his CART career. He's a tremendous champion and the fact that a Formula 1 team has signed him demonstrates what a high regard that other racing organizations have for our series and our top drivers. If he can get to Formula One using CART as a platform, that's a big feather in our hat."