Paul Tracy earned pole position for the London Champ Car Trophy race -- and without needing to complete a single lap in today's qualifying. The Team Player's driver was assured of a front row starting spot after setting best time in Saturday's ...

Paul Tracy earned pole position for the London Champ Car Trophy race -- and without needing to complete a single lap in today's qualifying.

The Team Player's driver was assured of a front row starting spot after setting best time in Saturday's qualifying, turning in a time of 37.006 seconds (115.960 mph) on the 1.192-mile Brands Hatch short circuit yesterday and earning another point toward the CART Champ Car Series championship. 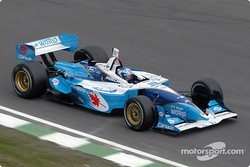 Rookie Sebastien Bourdais had looked set to break the 37 second barrier and force Tracy into an exciting battle, but the Frenchman took on too much in Paddock Hill Bend and ran out of road, leaving Tracy to tour round and conserve his tyres for tomorrow's race.

"The most important thing that you can put on a car is the tyres," commented Tracy. "So today we were able to not run the tyres hard, just take the shine off them." Tracy chose to save his tyres for the race rather than gamble on using a set of tyres to attempt to score another championship point.

The weather conditions were hot and sunny with a slight breeze and expectations were high that all the drivers would improve on their times from the first qualifying session. Indeed the first half of the drivers to qualify improved their times by about 0.4 seconds on average but as Tiago Monteiro, Jimmy Vasser, Darren Manning, Patrick Carpentier and Oriol Servia all failed to match their first qualifying times from Saturday, everyone looked towards Tracy, Junqueira and Bourdais to show what could be done.

And Bourdais looked quick, as everyone expected. On his first proper flying lap of the session he set the quickest time overall. Then the defining moment of the session took place. He was even quicker into Paddock Hill Bend on his final lap but lost it on the exit and ran wide, putting the left side of the car into the gravel which inevitably sucked the rest of the car off the road. He was easily able to rejoin but had already conceded pole position. 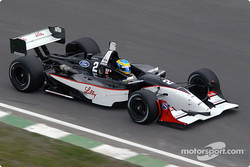 S?bastien Bourdais.
Photo by John Francis.
"I did my best lap time on the third lap and I was probably going to be quicker in the fourth", Bourdais said afterwards. "I was much much quicker in turn one and even a little quick into Paddock Hill Bend. I had to upshift a gear and try to hold the steering wheel with one hand but obviously this wasn't the way to do it."

The dip in the track at that point created enough decompression to pull his hand away from the steering wheel.

Junqueira had started his run knowing that he had a guaranteed third place, but wanted to set the fast time to earn the front row spot and the championship point that came with it. Despite his best efforts, he finished second fastest in today's session, same as yesterday.

"We made some changes overnight and the car wasn't really responding. We made a lot of changes for qualifying and it ran a little bit better" said the disappointed Brazilian.

Tracy then started his qualifying run knowing what had happened to Bourdais and that he had retained the pole. He did a slow first lap and was even slower on his second lap before peeling off into the pit lane without completing his allocation of laps or setting a competitive time.

During the press conference he summed up the session: "We had a good car and we felt that we could challenge today but you have to sit there and wait and wait and when I heard the time that Sebastian did on his last warm up lap I thought he was going to go into the 36s without too much trouble, and then he had some trouble. Ultimately we didn't have to go out and over-extend ourselves and use the tyres."

British driver Darren Manning was aiming to improve on his fifth position from yesterday using his vast knowledge of the circuit. He pushed hard right from his first lap, taking wider and deeper lines than the other drivers and was able to get close to his time from yesterday but could not beat it. Unfortunately he had lost all telemetry on the dashboard of Walker Racing Reynard and did not know how fast he was going.

"The car was a lot better balanced than yesterday" said Manning, "There's not much more time coming out of it, let's put it that way. I think we lost a little bit to the Lolas in this warmer weather."

Manning, Tracy and Carpentier all agreed that the hot weather had actually had a negative impact on the performance of the cars. "The warmer weather was a factor because it changed the aerodynamic balance of the car," stated Carpentier.

A few of the drivers did improve their provisional grid spot, most notably Rocketsports Racing Alex Tagliani who went from seventh to third fastest today which placed him fifth on the starting grid. And Adrian Fernandez, driver/owner of Fernandez Racing, moved from eighth on the provisional grid to sixth spot for tomorrow's race.

In the end, Tracy lines up for his first pole position in 52 qualifying attempts for the 165-lap race on Monday afternoon, alongside Bourdais, who will be hoping to make amends for his mistake that could have put him on pole position.