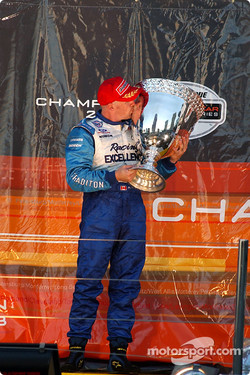 Podium: 2003 Champ Car champion Paul Tracy.
Photo by John Maricic.
Campbell was pleased to announce the return of the Champ Car World Series to Vancouver, which had just been voted one of the top three cities in the world. "The Molson Indy is one of the things that makes Vancouver a great city," Campbell stated.

After the announcement that Vancouver won the bid to host the 2010 Winter Olympics, the future of the Molson Indy hung in the balance. Campbell expressed his pleasure that the Molson Indy will continue on in Vancouver this year and confirmed that the event "is second to none for [the] excitement.and Vancouver is proud to welcome the Molson Indy Vancouver."

In conjunction with the teams and drivers that have come and participated in Vancouver over the years, Sean Lanigan stated that they have raised over a million dollars for charity in British Columbia.

Lanigan presented Tracy with the 'Molson Canadian Award of Excellence' for being the top driver last year in Canada.

"I can stand up here being proud and glad to say that I'm going to be coming back to the Molson Indy Canadian events.as the series champion; driving with the #1 on my car," said Tracy, adding that he hopes that the whole country is proud of his achievement and will come out and support the events.

Tracy expressed his excitement about the start of the season, and stated that he and teammate Patrick Carpentier will be headed to Laguna Seca within the next couple of weeks for their first test at Spring Training.

Tracy feels confident in the direction that OWRS is taking the Champ Car World Series and added, "[There will be] some key announcements in the next week or two with a couple of upcoming events that are really going to excite a lot of the fans," and was not able to elaborate beyond that.

Tracy thanked both Molson and the city of Vancouver for putting on the event, and confirmed that he is looking forward to another great year in 2004. The 15th anniversary of the Molson Indy Vancouver is scheduled to run July 23, 24 and 25.