CHAMPCAR/CART: Player's to leave racing at the end of 2003

TORONTO, Ontario, Canada, July 10, 2003 -- "The future for young Canadian drivers goes up in smoke today," said journalist Didier Schraenen before it was announced that cigarette maker Player's, who have supported Canadian motorsports since 1961, ...

TORONTO, Ontario, Canada, July 10, 2003 -- "The future for young Canadian drivers goes up in smoke today," said journalist Didier Schraenen before it was announced that cigarette maker Player's, who have supported Canadian motorsports since 1961, will end its affiliation with the sport at the close of the 2003 season. 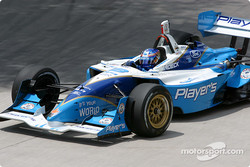 Paul Tracy.
Photo by Eric Gilbert.
Actually, the end comes before that, as Canadian law stipulates no involvement after the first of October. At that time, there will still be three races remaining in the Champ Car World Series. "If we have to race 'light', we will race light, " declared Bob Bexon, President and CEO of Imperial Tobacco Canada Ltd., which owns the Player's brand. "We could have fun the last three races, and I've just thought of that," he said with a gleam in his eye.

Player's have been involved in racing since 1961 and that means 43 years of continuous partnership. The Player's 200 held at Mosport outside Bowmanville was the firm's first step in a long, profitable and winning collaboration.

The most significant part of Player's involvement, of course is the Driver Development Program, which has brought the finest Canadian pilots to the attention of motorsports fans worldwide, thereby fulfilling its intent.

Many of those drivers were on hand to celebrate Team Player's 43 years of competition including current Champ Car drivers Patrick Carpentier, Paul Tracy and Alex Tagliani, former Toyota/Atlantic and Indy Lights standouts Claude Bourbonnais, David Empringham, Lee Bentham, Andrew Bordin and David Rutledge. Richard Spenard, who guided and coached many of these drivers was on hand to celebrate Player's racing success. 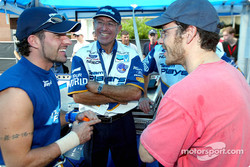 Alex Tagliani and Jacques Villeneuve.
Photo by Gridwork.
Jacques Villeneuve, 1997 FIA Formula One titleholder, 1995 CART and Indianapolis 500 Mile Race champion was unable to attend as he was testing for next week's British Grand Prix. Special tribute was made during the presentation to the late Greg Moore, who came up through the Player's Driver Development Program to be a Champ Car star.

"In 1961, the Berlin Wall was erected, Roger Maris hit 61 home runs, Yuri Gagarin was the first man in space and the Chicago Blackhawks won their first NHL title after a long, long dearth. Since that time, none of these auspicious occasions has been repeated," with the exception of Player's championships, Bexon reminded.

"The Sixties were a golden era of motor racing and Player's involvement," Bexon continued. "Leading into 2003, Player's has garnered 81 wins and 189 podiums, giving back to Canada, the country of our company's citizenship. Our drivers are ambassadors for Canada. Player's has responded to Canadian passion for motorsports by increasing the number of quality of Canadian drivers participating."

Player's have assisted in a number of ways, with partial and full monetary support, with sponsorship of events and with direct and indirect marketing of its brand. "We are particularly proud of our nine years with Gerald Forsythe, a man of integrity who spares no effort to succeed. Our operation was formed on a handshake; Jerry is that kind of person," Bexon stated.

"I would like nothing more than to continue and regret the end of this relationship, but it is the law. It's pretentious to conclude that if we're not involved the world comes to an end and it's moot as to whether or not I think the law is fair. It's the law," he said.

Rocketsports driver Tagliani noted, "It's very strange for me to be called to do this speech because, normally, when I'm addressing people about Player's it is usually good news. Today is quite sad. I entered the Driver Development Program in 1996. Player's gave me the opportunity to compete and helped create a lot of the friendships I have today. I give thanks to the team for the best years of my life and salute Team Player's for 43 years of first class racing." 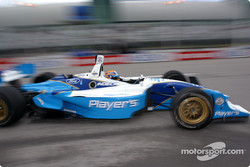 Patrick Carpentier.
Photo by Eric Gilbert.
Carpentier, with a smile said, "It feels like I've been with Player's since 1961. Everyone I knew wanted to be part of their program and I have been able to do so. I have great memories and these are years I will always remember. Today is sad, but these are the best years of my life. I just hope to get the championship for you this season."

"Bob Bexon was in charge of the Kool racing program so I've had five years working with him and it's been great," Paul Tracy declared. "Player's support is greatly appreciated by everyone who's been involved." Tracy, who earned the first victory by a Canadian in the 1993 Molson Indy Toronto recognized, "This is a difficult day for everybody here and everybody in Canadian motorsports.

"It's taken me a long time to get this team. The timing wasn't right before now but it's right now and it was worth the wait," Tracy continued. "This is already a great year for Team Player's. We have eight podiums in nine starts and four wins (three from Tracy and one by Carpentier).

"This is a very focused, committed team. I am sad not to have a longer career with Player's but I must confess, this year is a lot more fun than any other in my career. I'm going to try my best to deliver the championship. That's our team's goal and I'm crossing my fingers we'll get the job done," said the Thrill from West Hill.

As a 50-50 partner in the Player's/Forsythe Racing team, the cigarette company must step down at the end of the season from its sponsorship role. Bexon has alluded that they currently are searching for another Canadian company to take over its position but that no firm has come forward.

"I got involved in racing as a child when my father took me to the races," he recalled. Once Player's has gone, I will probably buy a ticket, sit in the stands and drink a Molson Canadian along with the rest of the fans. I would rather stay in and I personally will miss this very, very much."

True, this is a sad day for motorsports as Player's prepares to leave Team Canada, which is what most in the business call the squad fronted by Carpentier and Tracy. But it's also a time to take note, to say thank you to Player's for its long-term front-line involvement and its dedication to the enrichment of Canadian auto racing.