Paul Tracy will start from pole position in tomorrow's Gran Premio Telmex/Gigante race at Mexico City's Autodromo Hermanos Rodriguez, but he didn't get the prize he was aiming for today. With his eyes on his first championship in CART's Champ Car ...

Paul Tracy will start from pole position in tomorrow's Gran Premio Telmex/Gigante race at Mexico City's Autodromo Hermanos Rodriguez, but he didn't get the prize he was aiming for today. With his eyes on his first championship in CART's Champ Car World Series, Tracy wanted the bonus point that goes to the fastest driver in each Champ Car qualifying session. The PF Racing driver finished the day with the fourth-fastest time, and the bonus point went to Fittipaldi-Dingman Racing's Tiago Monteiro. 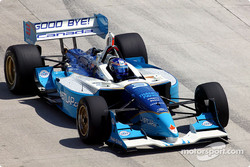 Monteiro, with a fast time of 1:29.042 seconds (112.639 mph), was thrilled to win a qualifying session for the first time this year. "Well, it was amazing, of course. We've been working so hard to get here and the team deserves it," the young Portuguese driver commented after his run. Monteiro has shown good speed all weekend, running on the top 10 of each session and turning the fourth-fastest time in the long morning practice session today.

Tracy's fast time from qualifying session one on Friday afternoon (1:28.842 seconds, 112.893 mph) was good enough to stand up as the fastest of the weekend, so he will line up inside of Monteiro for the start of the race at 4pm EDT on Sunday afternoon. The point Tracy earned yesterday increased his lead over Bruno Junqueira to fourteen points, with only three races left on the calendar.

Tracy blamed a slippery surface for his inability to improve today, saying: "The car wasn't too bad but I just didn't feel like I could have matched Friday's time. It got very slick out there from this morning's practice."

Junqueira also failed to improve on his Friday time, but will start third on the strength of his speed in the Friday session. The Newman/Haas driver didn't have a complaint with the track conditions today, but instead was slowed by traffic. "On the second set of tires we were three tenths faster than yesterday and I think we could have had the pole with that lap. But when Jimmy [Vasser] let me by on the lap we lost time," he said. Junqueira was also watching the points closely, adding: "We lost another opportunity to get a point." 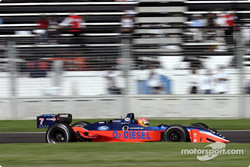 Tiago Monteiro.
Photo by CART/LAT Photographic.
Monteiro led a strong showing this afternoon from Champ Car's rookie class with fellow Reynard pilots Ryan Hunter-Reay and Darren Manning finishing the day second and third. The Reynard chassis, at a disadvantage to the better handling Lola competition at most tracks, seemed well-suited to the smooth surface at the Mexico City road course, and the three rookies took full advantage of the improved performance.

Hunter-Reay (American Spirit Team Johansson) and Manning (Walker Racing) will start fifth and sixth tomorrow, behind another rookie, Junqueira's Newman/Haas teammate Sebastian Bourdais. Bourdais was third fastest on Friday. Bourdais is in good shape to win the Jim Trueman Rookie of the Year crown, as he holds 142-83 points advantage over Manning. If Manning fails to win tomorrow or Bourdais scores any points, Bourdais will clinch the prize.

Michel Jourdain Jr. was the fastest of the six Mexican drivers in the field for their home race, and he will start his Team Rahal Lola outside Jimmy Vasser's ASTJ Reynard on row four. Jourdain, the only driver other than Junqueira with a chance remaining to beat Tracy to the championship, was hoping for a better performance in front of the demonstrative Mexican fans. With them cheering him on, he hopes a good run in the race tomorrow will keep him in the hunt. "We will see what happens tomorrow on the start. We want to get through the first lap and hopefully make up some positions through the race on the track and in the pits and hopefully at the end of the day we will gain on Paul and Bruno," he said.

Behind Jourdain on the grid will be fellow Mexican, Luis Diaz, in only his second Champ Car start. Diaz subbed for injured owner/driver Adrian Fernandez at this race last year, and is running this time with Walker Racing, hopefully in preparation for a full-season Rookie-of-the-Year attempt in 2004. Tracy's PF Racing teammate, Patrick Carpentier will start inside of Diaz on row five.

Mario Dominguez (Herdez Competition), winner of the most recent Champ Car race, the Grand Prix Americas in Miami, Florida, will start 11th, next to the third place finisher in that race, Mika Salo of PK Racing. 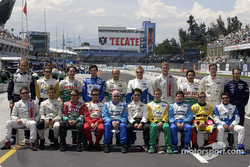 The class of 2003.
Photo by Fernandez Racing.
The next two rows are filled with drivers who had hoped to be further up the grid but who have been uncharacteristically slow today. Alex Tagliani and Mario Haberfeld are on row seven and Fernandez and Oriol Servia behind them on row 8.

Mexican rookies Rodolfo Lavin and Roberto Gonzales will start 17th and 18th, while the final row is the domain of Dale Coyne Racing drivers Gualter Salles and Geoff Boss.

The 2003 Gran Premio Telmex/Gigante should answer a lot of questions: Will the chase for the Vanderbilt cup get closer, or will Paul Tracy put in a strong claim for it? Will Sebastian Bourdais come away as the Jim Trueman Rookie-of-the-Year? Will hundreds of thousands of Mexican fans see a thrilling race? The last question should be answered with a solid "yes", but tomorrow we will find the rest of the answers.

Hunter-Reay, DHL to return with Andretti Autosport for 2021