Drivers, fans get preview of Mid-Ohio event on test day

Brian Herndon gave his brood the option of visiting the Cedar Point amusement park on Lake Erie or picnicking under the shade of the pines during an IZOD IndyCar Series test July 26 at Mid-Ohio Sports Car Course. 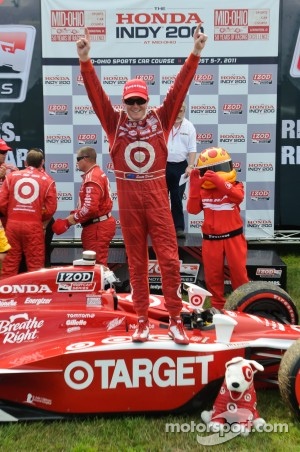 After brief deliberation, five carefully packed ham and cheese sandwiches mixed exceptionally well with the sights and sounds of 24 cars on the 2.258-mile 13-turn road course. Add Simona de Silvestro, who tested at the venue July 2, and the family from Mansfield, Ohio could have been witness to a mini Honda Indy 200 at Mid-Ohio.

As it stood, through five hours of testing (shortened 90 minutes by a rainstorm) for the Aug. 3-5 event unofficial lap times posted by more than half the field were between 1 and 2 seconds quicker than 2011 practice and qualifying.

"The new car is quick without even putting red (Firestone Firehawk alternate) tires on," said Target Chip Ganassi Racing's Scott Dixon, who has won three of the past five races on the flowing road course. "I can't wait until next weekend to make up points."

Dixon is fourth in the series championship with four races remaining - 51 points behind the front-running Ryan Hunter-Reay of Andretti Autosport. The next two races are on undulating road courses.

"This is definitely an important test for us because there are a lot of things we can take away from here and bring to Sonoma (Aug. 24-26) as well. We'll test there as well (Aug. 17)," said JR Hildebrand, driver of the No. 4 National Guard Panther Racing car. "It's a pretty critical point in the season for us to as a team to improve our pace a little and make sure we end on the right note from a road courses perspective."

Jim Newman and his brother-in-law, Clayton Thompson - longtime ticket-holders for Indy car events at the venerable venue - also were testing a few things, such as seating locations. Staples in the Keyhole, they were giving the hillside - with views of Turns 6-8 and close to concessions and restrooms - a try.

"You have to carefully test these things," Newman said. "You can't just give up your space where you've been for years, have seen a lot of exciting racing and developed relationships. But we'll see.

"Just like IndyCar drivers, you have to go out early and experiment."

Kimball injured in incident at test 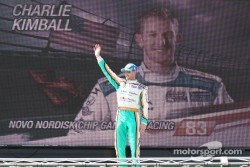 Medical update from Dr. Michael Olinger, INDYCAR medical director: Novo Nordisk Chip Ganassi Racing driver Charlie Kimball was treated for a fracture of the fifth metacarpal of his right hand at MedCentral Hospital in Mansfield, Ohio, after being involved in an incident during a team test July 26 at Mid-Ohio Sports Car Course. Kimball will be re-evaluated by an Indianapolis-based specialist on July 27.

Kimball is expected to compete next week when the Indy Cars return to Mid-Ohio.

Saavedra to compete in Grand Am event at Indianapolis 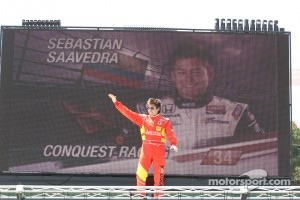 "I am excited to partner Sebastian in the #46 Corvette," Davison told Speedcafe.com. "We battled for the Indy Lights Championship together in 2009 and have become good friends ever since.We have some exciting challenges having not driven the car before and the use of a H-pattern gearbox, however we will be pushing to maximize a result for Michael Baughman Racing."

Saavedra joins IZOD IndyCar Series drivers Sebastien Bourdais (Starworks) and Scott Dixon (Chip Ganassi Racing with Felix Sebates) in the field for the Grand Am race. Both Bourdais and Dixon will compete in the Daytona Prototype class.

In the video below, some highlights from 2011 Honda Indy 200 at Mid-Ohio

The 2012 IZOD IndyCar Series race continues with the Honda Indy 200 at Mid-Ohio on Aug. 5 at Mid-Ohio Sports Car Course. The race will be televised by ABC at 12:30 p.m. (ET) and broadcast by the IMS Radio Network on SiriusXM (XM 94 and Sirius 212). The next Firestone Indy Lights race is the Grand Prix of Trois Rivieres on Aug. 5 on the Streets of Trois Rivieres, Quebec.