Closeness is a given in IndyCar's 2013 season

It turns out that racing fans, in particular IndyCar ones, are rather predictable.

Spectators want close racing with lots of passing. They want fast cars and dare-devil drivers. Fans want to follow a winner, someone they can count on to deliver thrilling on-track performance every weekend.

Looks like the fans are about to get just exactly what they want; indeed, what they got in the 2012 IZOD IndyCar season but only more and better this time around.

Last year's iteration of IndyCar witnessed incredibly tight racing, on road and street courses as well as the ovals, once engine performance was equalized. Qualifying speeds at Indianapolis Motor Speedway jumped as a result of the crowd-pleasing decision to increase turbo boost. The unrivaled drama of Takumo Sato's daring pass in Turn 1 and the Indy 500's conclusion put patrons on their feet both in the stands and in their living rooms, and gave the Greatest Spectacle in Racing another multi-race champion in genial gentleman Dario Franchitti. 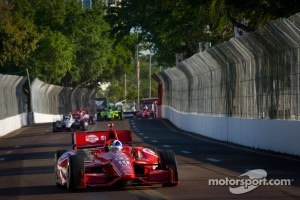 The Barber Motorsports Park open test results trickling in this week reinforce the reasons why many observers of motorsport suggest that IndyCar can repeat and build on 2012. Some pundits opine that the sport of open-wheel racing in America is well on its way back to good health, and perhaps on pace to equal a similar huge popularity to that which it enjoyed prior to the disastrous split-up.

Almost every car and driver on Tuesday posted a lap better than the current track record. There was a refreshing variety of teams and manufacturers at the top of the timing and scoring sheets, and the cars were consistently quick all day long: nearly 80% of the field was within one tick of fastest-man Will Power's time in the Team Penske Chevrolet-powered Dallara DW12.

Some of the improvement in speed is a result of a cool day at Sebring International Raceway, benefitting both engine performance and driver comfort. Some is from a recent diamond-grinding of the racing surface, a process that makes the track grippy and smooth. The rest can be accounted for by off-track research on the shaker-rig and human ingenuity over the winter break.

Plotted on a graph the result is a bell curve of fast times bunched up and skewed to the right, to the fastest side of the board, suggesting that the majority of the race teams are keeping up with improvements made in the off-season by the best.

Balance is not typically a word that one applies to a series in which three teams have for years dominated the winner's circle, but IndyCar finally appears to be turning the corner on the quantity of truly spirited racing. A recent decision to form a "competition committee" to oversee performance aspects of the sport promises to further the sport's competitiveness as well.

A tweak of the rules now and then doesn't absolutely preclude a 1990's Dallas Cowboys-like run by a very sharp team owner and a pair of fast drivers. On the other hand, there is absolutely nothing wrong with that: it builds fan loyalty to a particular brand and in many cases brings a countervailing fan resentment which adds to the dynamic.

It's a gratifying change from the past that brought the series ample shame in a running calamity of never-ending drama by way of family squabbles, over-hyped personalities and deadly crashes.