Conway happy with car, confident going into the Indy 500 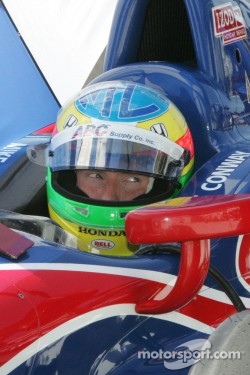 On race strategy: “We know it’s going to be a long day out there so you have to keep your nose clean on the first start. It’s going to be busy the first few laps but you don’t want to play it too safe because you can easily get overtaken; you just have to move forward and be smart. I want to get up there—if we can work our way forward and get in mid-pack by 10-20 laps, I’ll be happy with that. Our ABC car felt pretty good in race trim the other day so I think we’ll be looking good. We got in a few packs of 3 or 4 cars and the car felt good so I’m pretty happy with it. We just have to finalize picking the right gears because once the race starts, it’s going to be different from running in 3-4 car packs versus a 12 car pack. Things will change because of the speeds you’d run in a bigger pack and when it’s three-wide you’re going to pick up crazy tows so you have to make sure you gear it for the right situation.”

On single file restarts: “I suppose it’s a good thing but at the same time it makes it harder to pass. It’s safer, definitely around here, it’s safer.”

On the predicted high temperatures on race day: “I remember in 2010 or 2009 that it was pretty warm, high 80s or low 90s. It does change how the car reacts with that amount of heat, it requires some different downforce levels, just something we have to keep in mind. But the engineers have their little cookbook back there so they’ll be able to figure it out. It should make it fun.”

On how he prepares for the heat: “Well I’m the fittest one out there, so it’ll be easy [chuckles]. No, I’m used to it, I think the road course stuff is more physical than the ovals so in terms of that, I’m pretty prepared. I do heat training anyway so I’m good to go. I’ll be sure to stay hydrated throughout the race.”

On what surprised him the most about the month: “Nothing really surprised me, you expect anything and everything here. I would have liked to have had a little more speed come qualifying but it wasn’t to be- you just have to deal with it.”

On his confidence in the cars’ (14 and 41) being competitive: “Everyone gets new engines for the race so hopefully it will play in our favor maybe to having a fresh engine. In terms of the car, I’m happy with what I have underneath me so I feel good going into the race.”

Conway has started in the top 10 in three of the first four races of the season and started 11th in St. Petersburg. His best finish of the season is seventh in the Honda Grand Prix of Alabama.

ABC Supply, which made its debut on the No. 14 car at Indy in 2005, has continued to sponsor the AJ Foyt Racing team continually in the IZOD IndyCar Series since that first race. 2012 is the eighth straight season for the country’s largest wholesale distributor of roofing and one of the nation’s largest distributors of siding, windows and other select exterior product. Over the past seven years they have entertained over 35,000 guests -- employees, contractors, vendors—at the races. They are celebrating their 30th anniversary this year.

Cunningham's first goal at Indy 500 is to finish