Cunningham has solid finish in Foyt Honda at Fontana 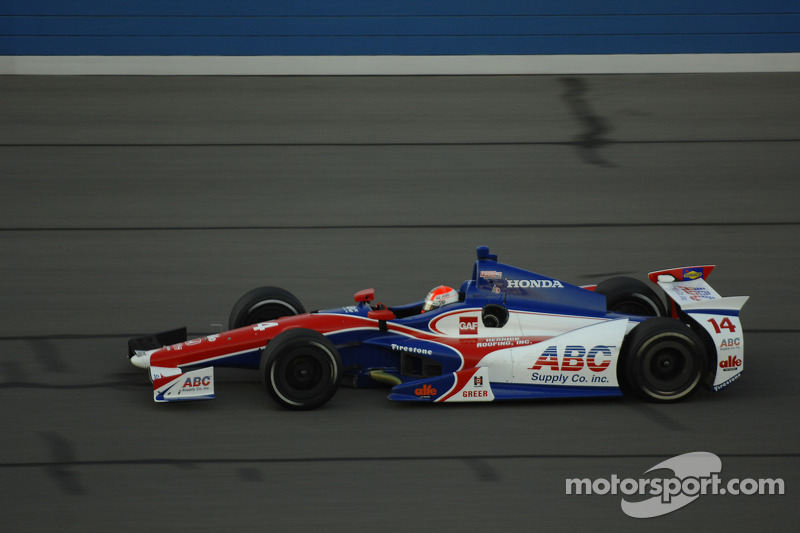 FONTANA, Calif. Sept. 15, 2012—In the shadows of Hollywood, the IZOD IndyCar Series season finale at Auto Club Speedway packed enough drama for a blockbuster movie—with all of the subplots. 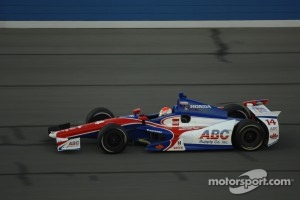 When the checkered flag flew for race winner Ed Carpenter, Ryan Hunter-Reay finished fourth to edge out Will Power for the 2012 series championship, despite entering the race 17 points behind the Team Penske driver. Hunter-Reay’s impressive drive also netted him the AJ Foyt trophy for winning the Oval Track championship. It was the first title for team owner Michael Andretti since 2007 when Dario Franchitti won it.

Wade Cunningham drove the ABC Supply Honda to a 14th place finish which was a triumph of sorts for Cunningham who was tapped to drive when regular season driver Mike Conway stepped out. On Wednesday during testing at the 2-mile superspeedway, Conway announced that he no longer wished to compete on oval tracks.

Cunningham flew in Thursday and did a shakedown run in the No. 14 car. In the Friday morning practice session he ran a total of 28 laps. He qualified 23rd that afternoon, but in the final practice that evening, Cunningham spun and hit the wall in Turn 2. He was “exploring different lines on the track” when he misjudged the seams on the track which caused his car to spin.

The ABC Supply crew repaired the car overnight which included having to switch out the engine, replace the undertray, right side suspension and uprights, and repair some of the bodywork.

In the race which started in daylight, Cunningham got off to a slow start and lost as many as three laps to the leaders by lap 50 of the 250-lap race. However, as the sun went down, the team worked with him on the car’s setup, which included team owner A.J. Foyt making a strong suggestion to use his tools or as Cunningham said (only half-jokingly), “It basically took A.J. threatening me with my life to start changing the bars and to kick it into gear and from that point on, we ran a really good race.”

Indeed, Cunningham went from running laps in the 200mph range in the opening stint to running lap speeds at over 210 mph in the second half of the race. Unfortunately, he had lost too many laps in the beginning of the race which he couldn’t gain back (although he did gain a couple back).

“Every time I got lapped, it made me 7-8 mph slower on that next lap so the next guy passed me and the next guy, so it was this really awful downward spiral,” Cunningham explained. “It really took until the first yellow [lap 56 for Power’s accident] for that to stop because the field got more packed up and I got a chance to gather myself. Then I saw the leaders running on a different part of the track from me so I adjusted my line and I moved up quite a bit and it just transformed the car and we went from running 204 to 210. It was literally 30 lbs. of crossweight, a click of the bar and running a different part of the track and we went so much quicker.”

Throughout the race, the ABC Supply team performed well in the pits, with all stops in the 7 to 8 second range, another small triumph for the team which had made some adjustments in their pit stop crew over the past two months.

Cunningham, whose last time in an Indy car was the Indianapolis 500 (that race was cut short because of electrical issues), had not raced a full IndyCar race since last October at Kentucky. That he was able to run even better at the end of the 500 mile race than he had in the beginning testified to his athletic fitness and mental focus over the nearly 3-hour long race.

There were seven cautions and at lap 242, a red flag thrown so the race could finish under green flag conditions. As it turned out, Takuma Sato brought out the yellow flag on the final lap when he hit the wall in Turn 2. Despite all of the cautions—which were mostly for single car accidents-- no one was injured.

"I knew we were facing an uphill battle coming in,” Cunningham said after the race. “If anyone told us we'd have to battle through a crunched car, four laps down and come back to finish 14th, well I think everyone on the ABC Supply team can hold their heads high. We had good pit stops- never lost positions relative to where we were running. Everyone hit their marks and the ABC car rolls back into the trailer after 500 long miles, so there's a lot of satisfaction for me."

Given the ABC Supply team’s circumstances of a particularly tough weekend at what turned out to be a truly tough track, there was quite a bit of satisfaction to go around.

Foyt commended the rookie driver and his team on their performance in the shadows of Hollywood.

“Wade and everyone on the crew did a good job tonight. It didn’t start out so great but they stuck with it and it turned out okay,” Foyt said. “I’d like to congratulate Ryan and Michael on winning the championship. They proved they deserved it tonight.”