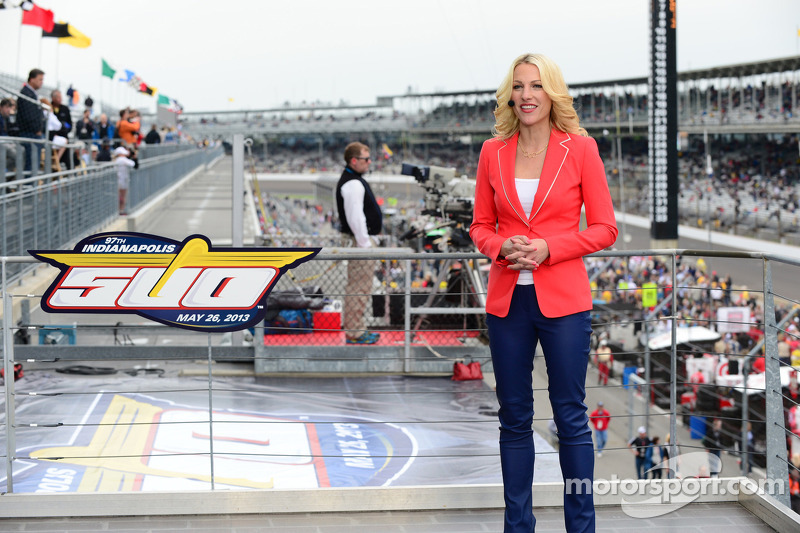 ESPN SportsCenter anchor Lindsay Czarniak discusses her role as host of their Indy 500 telecast and how experiencing Indianapolis has changed her perspective on the race.

ABC has assembled a small army to present its telecast of the 98th running of the Indianapolis 500. For ABC, it will be celebrating its 50th consecutive year of airing the “Greatest Spectacle in Racing,” and its skilled professional staff of some 200 specialists will attempt to cover every inch of the Indianapolis Motor Speedway with 92 cameras focused on the action.

Included in the star-studded cast are Allen Bestwick, becoming the 10th person to call the race, and he will be joined by retired racers Scott Goodyear and Eddie Cheever (the 1998 500 winner) along with pit reporters Rick DeBruhl, Jamie Little, Dr. Jerry Punch and Vince Welch. ESPN SportsCenter anchor Lindsay Czarniak has returned as host of the telecast, the first female to serve in that prestigious role.

The assignment will be challenging for Czarniak as it will mark her return to work after giving birth to her first child, Delano born in March. While the perky sports anchor is torn from being separated from her son, she knows the baby will be in good hands with her spouse and MSNBC anchor Craig Melvin and family members.

Flashing back to 2013, Czarniak was literally blown away by her involvement with the Indianapolis 500. “It was an awesome experience,” she said. “Last year was my first time to host the program and although I had heard a lot about the Indianapolis 500, it wasn’t until I got there did I realize how big a deal it was and only then did I realize what it meant to so many people. I met people and families that had been coming to Indianapolis for years if not decades. That just blew me away.”

Czarniak has covered NASCAR races for many years, including the Brickyard 400, so racing was not new to her but the high speeds of the IndyCars was an eye-opener.

“The speeds the drivers were running were just insane.” To give her an up-close perspective, she took a high-speed ride in an IndyCar two-seater with 1969 winner Mario Andretti.

“It was wild and amazing,” she said with conviction. “The experience was shocking to me, realizing how fast we were going and what it feels like to go that fast. I couldn’t believe how close to the wall we were and even though I only got to do a couple of laps, the fact that the drivers did in for hours on end was hard to fathom.”

She noted that being in Indianapolis and seeing the action gave her a new perspective as to what drivers do in risking their lives in search of fame and glory.

“It made the hairs on the back of my neck stand up. You see risk from a different perspective when you are at the track,” she commented. “And seeing one wife holding her rosary beads as the race proceeded brought out a different type of reality.”

In some ways, Czarniak said seeing the Indy 500 for the first time was like having your first child. “People tell you how amazing it is, but until you go through it, you don’t realize how amazing it is. It is emotions times 10,” she said.

Preparing for the 2014 race, Czarniak reviewed tapes of last year’s telecast, looking for areas to improve upon. She also talked with the entire ABC team, including feature writers and pit reporters, in search of ways to enhance her performance in the pre-race show. One of the goals for the personable host is to convey the raw feelings of the race and the accompanying emotions to viewers that have never seen the race in person.

“There’s one section of the country that has been coming here for decades, but it is unfathomable there are so many people that have never experienced it,” she said. “I want to convey and channel the feeling of the race to the first-time viewers at home.”

If anyone can convey the feeling, it is Czarniak, who was trained and mentored by the late George Michael, the legendary WRC-TV sports anchor and creator of the critically acclaimed Sunday night special, the George Michael Sports Machine. “George was such a strong influence on me and he was always needling me, wanting me to be better. He knew Indianapolis was an amazing event, and he would be so proud of me,” she said with emotion.

Czarniak admits her nerves will be fired up come Sunday morning. “You always get nervous, but it is a nervousness I look forward to,” she stated. “If I wasn’t nervous, I would think something was wrong. It is sort of a nervous-adrenaline at work.”

The perky anchor will open the telecast with a one-hour pre-race program and then be in the Pagoda with the ABC team as the race unfolds, and she will close out the day interviewing the winner for ESPN’s SportsCenter that evening.

On Sunday, ABC viewers should expect to see a polished performance not only by Czarniak but the entire team of on-air talent, camera professionals, producers and the skilled support staff.

'The Yellow Party' - Fighting Cancer and having fun

This Week in Racing History (October 3-9)