What makes for a great race? Drama, danger, passing, and well...another popular winner.

What a race at Detroit today. I have to say that I was thoroughly impressed by the action on track and the battles. Between Will Power’s crazy passes early in the race, to seeing Penske and Ganassi cars battling for positions no further back than 4th.

I think the most surprising and pleasing fact of the race today was the winner. Mike Conway, while he is not nearly a veteran of the sport, is certainly a popular driver among fans, or at least with me.

Conway has to be one of the bravest drivers despite what some would call being afraid of oval racing. The guy stated late last year he didn’t want to run on the ovals, and he hasn’t.

He has gone and found work driving for the Oreca team in WEC. What I can only assume was a quick phone call from Dale Coyne ended with a checkered flag at a premier event in the IndyCar series. Pretty incredible.

It’s not the Indy 500, but it’s the first race immediately after…which gets a lot of attention because while the nation, continent and world are asleep during much of the IndyCar season, people pay attention after a great race like the 500 last week.

I watched the highlights of the qualifying sessions yesterday, and the manner in which Conway threw his car around corners was almost Senna-esque. I might take some flack for saying something that profound, but its true. He was on the edge of control, taking a car that many write off each week, and put it on pole, then won the first of the two races slated for this weekend. 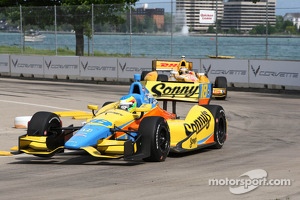 Danger added to the equation that was today’s race. While the DW12 (Dan Wheldon) chassis was built to prevent cars becoming airborne from wheel-to-wheel contact, we were reminded that anything can and does happen.

A.J. Allmendinger’s Penske Racing car jumped into the air after making contact with Scott Dixon in turn two on the first lap. He was the only victim of the wreck, but his incredible impact with the wall reminded me why I don’t lean on the concrete barriers when shooting trackside.

Lastly, I have to admit a minor amount of disappointment. I am a Canadian. Please don’t hold that against me. But I have two drivers I will cheer for. And both of them drove like bone-heads today. Between Alex Tagliani stuffing his ride into the barrier under caution, or James Hinchcliffe picking up a tire on his chassis and dragging it around the track, it was a tough day for the canucks.

I look forward to tomorrow’s event, and would love to see another small team take the race out of the hands of the big boys in the paddock.

If you missed today’s race, tune into ABC tomorrow at 3:30 P.M. ET. You won’t be disappointed.

INDYCAR's road to the future