Dale Coyne Racing found both its drivers on the podium after the first of two races in Detroit.

Dale Coyne Racing's Mike Conway backed up his pole-winning performance during qualifications at the Belle Island, Detroit circuit by winning the first of two IndyCar Series races on Saturday.

“The car has been great all weekend and as the track was rubbering in it was getting better and better," said Conway. "It was keep pushing and get a gap, and the strategy worked out perfectly at the end. I wanted to stay out and do more laps."

It was Conway's second career win. His first came at the Long Beach Grand Prix in 2011.

Conway dominated the competition, taking a commanding lead from the start over the 2.346-mile, 13-turn Belle Isle street circuit in the 70-lap race. Conway led 47 laps, the most of any competitor, and set the fastest lap (1:17.8447 on Lap 47) in the race. 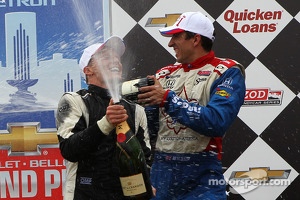 "We were impressed this morning," said team owner Coyne of Conway's impressive qualifications run that gave the team its first-ever pole for an IndyCar Series race. "It’s pretty amazing on his part and for the entire team to put both cars in the top three."

"We’ve taken the points lead, which is very good," said Castroneves. "What we had was great; I wish it could’ve been a little bit more, but we’ll take it. Our strategy for tomorrow is just to keep it clean like we did today."

Conway will begin the second race on the pole as a result of posting the fastest lap in a free-style qualifications session on Saturday morning, several hours prior to Race 1. He previously had a best qualifying result of second at Barber Motorsports Park in 2010 and Baltimore in 2012.

Wilson, who has provided Dale Coyne Racing its other two series victories, will start eighth in Sunday's Race 2 at Belle Island.

The IndyCar Dual Race 2 commences at 3:30 PM EDT on Sunday and will be broadcast live on NBC Sports television, and the Indianapolis Motor Speedway radio network.