Rookie Conor Daly was okay while rookie Carlos Munoz again topped the charts. Tomorrow is Fast Friday and perhaps the expected veterans will be the ones to set the hot laps.

It took 5-1/2 practice days for the clean white walls of Indianapolis Motor Speedway to be smirched with rubber and carbon fiber. Shortly after 2:15PM, rookie Conor Daly was on his 44th lap when he got low in the first turn and smacked the SAFER barriers (thank goodness they’re there) before his Dallara/Honda racer got on its side, eventually coming to a halt on its Firestone tires.

Daly climbed from the car without assistance and appeared to be in good condition. The car? Not so much. At the time of the hit, Daly held the 15th quickest speed of 220.780 mph, while JR Hildebrand, using a newly installed Chevy engine was quickest – tow aided, of course – at 224.075. As is customary, all activities came to a halt as clean-up ensued on the racetrack.

Conor Daly appeared, half an hour after the accident, once checked, released and cleared to drive by the Indianapolis Motor Speedway medical personnel, none the worse for wear. The team had just changed springs on the car and Daly “felt comfortable the whole time. I was just trying to experience a little bit more with the car and there was a car in front of me,” he said. “The wind, it feels like it’s been gusting more and the rear was leaning hard on the outside tire. It just kind of folded over on itself. I just lost it. Just not good.”

It took IMS a bit more than half an hour to get the track prepped for further work and action resumed right after 2:45PM. 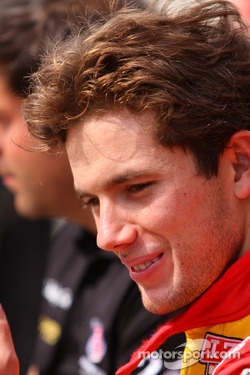 Marco Andretti took top spot for a while but it was his rookie teammate, Carlos Munoz who took the top spot (225.163 mph) by the time the six-hour session was done – with no further mishaps by any of the 33 drivers. Yes, Buddy Lazier finally made it onto the racetrack, albeit for a scant three laps – he still needs to do a refresher course so this was definitely a systems check of the car.

Tomorrow, fast Friday the boost goes up on both Chevrolet and Honda engines to the same level as last year: from 130 kPa to 140 kPa, remaining in effect through qualifying weekend. “What we had last year worked really well for the full sequence of the month of May,” said Will Phillips, INDYCAR’s vice president for technology. “With the car performance progressing incrementally through natural development of the chassis and aerodynamics, lap speeds are expected to increase in qualifying,” from last year’s levels.

There were none of the expected thunderstorms today; rather, it was hot, muggy and windy earlier in the afternoon, particularly when Daly had his shunt. The weather appeared to verge south of the Speedway and that, my friends, is a very good thing!