Welcome to Indiana-ville via Jay Alley as the countdown for Pole day in Indianapolis continues for the "Greatest Spectacle in Racing"!

Defending Indianapolis 500 winner Dario Franchitti finally made some noise today on Day Five of practice by snagging the top spot on the speed chart and outdueling the Andretti Autosport brigade. Dario was the first non-Andretti driver to finish with quick time at the end of a practice day this week, and there's more to come this weekend as the teams will be allotted more turbo boost on Fast Friday in preparation for Saturday's first day of qualifying. You just knew that the Target Chip Ganassi team would be heard from sooner or later and Dario now jumps into the discussion as a possible pole position candidate.

Thirty-two cars hit the track today and logged 2,165 laps as warm blustery weather continued to grace the Speedway. Rarely have we had so many consecutive dry days and the teams made the most of it, especially during happy hour from 5:00 p.m. to the 6:00 p.m. checkered flag when as many as 13 cars ran in a huge pack and put on quite a show. This is what practice at Indianapolis is supposed to be like. Indy 500 specialist and NBC Sports Network Indycar commentator Townsend Bell was second quick while the first Penske runner, Helio Castroneves, was third. Defending IZOD Indycar Series champ Ryan Hunter-Reay was the quickest Andretti ace at fourth quick and former Penske driver and 2012 Indy pole winner Ryan Briscoe (Now with Ganassi) soared into fifth from nowhere. But then he's highly motivated to prove he deserves a full time Indycar ride and Ganassi must be bristling with frustration after the team's four straight quiet days at Indy. 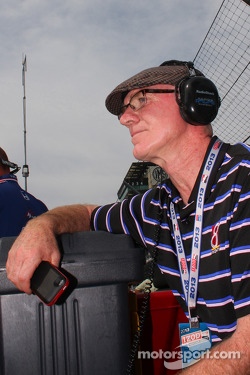 Rookie Conor Daly continues his kid-in-a-candy-store adventure with AJ Foyt's team and turned the most laps today (126) while father Derek tuned in on the team radio. Conor wasn't anywhere near the top 10 in speeds today, but he gained lots of experience running in traffic and didn't do anything wrong either. Not only has the weather this week been rare, but so has the lack of a single spin or incident, especially considering how many laps have been run. In Turn 3 late today, I saw a couple of instances where drivers weren't on the preferred line but nothing that looked like anyone was getting in trouble. Only fellow rookie Carlos Munoz seemed to dare to go below the white line through the corner which probably meant his car was pushing and he needed to duck below the traffic jam to get the nose wings to work so the car would turn. It may also explain why he was only 10th quick today as the learning curve continues for the first year drivers. The field right now is incredibly close with roughly 0.8 seconds separating first and 30th, so Saturday should be a real dogfight in qualifying and milliseconds will be the difference in the Fast Nine.

In theater they talk about smelling the greasepaint, and walking through pit lane today in my short stint at the track, I had a real sense of the same sort of thing at Indy. Drivers were peeling out of their pits and burning rubber, leaving behind clouds of racing rubber smoke that you just have to love. Thanks to a tip from a friend, I found Indianapolis Colts quarterback Andrew Luck in the pits with several buddies and you could tell he was eating it up. He got escorted out to the area between the center retaining walls which separates the pits and racing surface and was grinning from ear to ear as cars raced past just inches away. Luck knows a little something about drama and theater having led the Colts to numerous comeback wins his rookie season, so I'm sure having the chance to experience the biggest stage in racing up close and personal was a real thrill for him and his friends. Please don't let him get in a race car however!

I am really looking forward to Pole Day on Saturday and expect more drama to unfold now that the mid-point of the preparation week has passed. While the crowds aren't coming out like they used to for the first day of qualifying, it's a day in racing that's still hard to beat. Nowhere else does a driver have to run four precise laps to post a qualifying time. Sixteen corners to screw up. Ten miles in about 2 minutes and 40 seconds. Three chances per car per day. Tension for Indycar's Big Three - Andretti Autosport, Target Chip Ganassi Racing, and Team Penske- that mounts as the day goes on, accepting nothing but the best from their teams. And it's only 20 bucks to get in for the day with practice starting at 8:00 in the morning. You gotta be there!