De Ferran on Castroneves: “He’s an IndyCar great, no question” 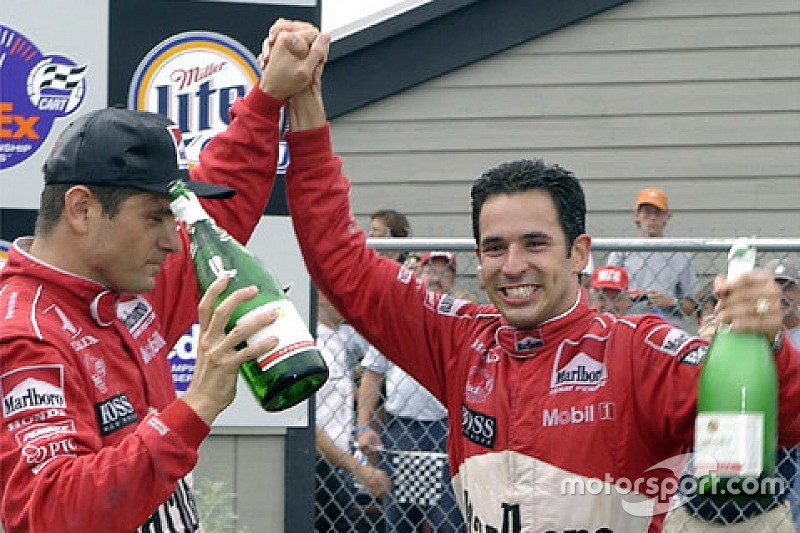 Gil de Ferran was teammates with Helio Castroneves for four years. As Helio switches to a fulltime IMSA sportscar ride, Gil tells David Malsher what made his compatriot so strong in an open-wheel racecar.

Castroneves will take part in next year’s Grand Prix of Indianapolis and also the Indy 500, where he will attempt to join AJ Foyt, Al Unser and Rick Mears in the exclusive club of four-time winners of the world’s biggest race.

But his fulltime career in IndyCar is over, after 20 years, 30 wins and 51 pole positions (including the weird Iowa qualifying heat races in 2013).

The bare stats appear to put Castroneves among the all-time greats of U.S. open-wheel racing, a view with which de Ferran – two time CART Indy car champion and 2003 Indy 500 winner – wholeheartedly agrees. And having worked alongside him at Team Penske for four seasons he should know.

Castroneves was heading to British Formula 3 in 1995 as de Ferran was leaving Europe to join Jim Hall’s team in Indy car racing. Helio did well in the UK, finishing third in the F3 championship before heading back to the Americas to race Indy Lights with Tasman Motorsports for two years (seventh and second in the championship over those two seasons).

In 1998 he graduated to CART Indy car with Bettenhausen Racing, scoring a podium finish at Milwaukee. The following season, now at Hogan Racing, the much lamented flat one-mile oval in Wisconsin was the site of Castroneves’ first Indy car pole position and he scored another runner-up finish, this time at Gateway.

Then at season’s end, Greg Moore, who had signed to race for Team Penske in 2000, perished in a hideous accident at Fontana and team owner Roger Penske drafted in Castroneves to join de Ferran. Over the course of two seasons at Hall/VDS Racing and three at Walker Racing, Gil had proven to be a race winner and a championship contender.

DM: Before you both joined Penske, were you aware how strong Helio was going to be?

GdF: Yeah, definitely. Ever since he left Brazil, he’d been recognized as a bright young talent and he had adapted well to F3, Indy Lights, and Indy cars. He’d had a couple of good races with Hogan in the Lola in ’99.

You’d been used to running pretty much alone at Hall and at Walker. Did you welcome the idea of sharing all the great Penske resources with a teammate? Or did you resent the idea of someone similarly fast joining you?

I don’t recall that being a concern. I knew I’d signed for a team that could comfortably run multiple cars and all I cared about is what I was going to do; I wasn’t too concerned about the other driver.

I wasn’t one of those drivers who went out of their way to play mental games – it takes too much focus away from what you’re actually supposed to be doing! So from Day 1 I tried to establish a good relationship with Helio.

Given that you’re eight years his senior and by then you’d won races and fought for a championship, did you take on a father figure role?

I didn’t see it that way at the time. It would have been unrealistic to think that someone like Roger would sign a second-rate driver, therefore I knew it was going to be very hard to beat Helio with the same equipment every single weekend.

There would be some weekends with me on top, some with him on top, and that shouldn’t get in the way of a collaborative relationship. I felt there was more benefit in us working together. To maximize what we had, we needed our engineers to all work together, and dividing the team into factions would have hurt our chances.

So getting back to your question, I certainly didn’t feel I needed to be some sort of teacher to Helio. I was just completely open with him to benefit us both and the team as a whole.

From the outside it looked like you were the canny, strategizing championship campaigner and he was the swashbuckling daredevil who was focused on establishing himself. Is that how it felt to you, too?

Well, it was my purpose from the start to win the championship, and I think the average you needed to achieve at each race at that time was fifth. I think an average finish of between fourth and fifth each race had been proven to be the way to win a title since Indy car began… and is still that way, actually!

But on the other hand, I’ve never thought the best way to win a title was to be in a defensive mindset all year. My strategy was to be as fast and aggressive as I could be, but never lose sight of the ultimate goal. So there would be one or two races where instead of attacking you’d go, “Hmm, I should be smart here.”

Helio was very fast from Day 1 and he was particularly fast when we went to understeer-type circuits. He has a tremendous feel in his hands and can deal with the car leaning on the front incredibly well. Very sensitive, measured – and I can remember being amazed at how fast he was in certain races.

So I would say I was more consistent over that 2000 season, but I remember it as push, push, push all the way. I don’t remember the details of what happened to Helio [three wins but seventh in points], but I know he had some bad luck mechanically and a couple of incidents, and it was such a competitive year that you just couldn’t afford to have a lot of those bad days. It was crazy competitive.

The next year, I had a very slow start because I had a couple of big crashes in preseason testing and that got in the way of progress – understanding what I needed to do to get the most out of the car in terms of setup, particularly in ovals.

And as I recall, Helio really was strong, very much in the groove from the start of the year. He won twice in the first half-dozen races – three times when you count Indianapolis [at that point an Indy Racing League race] – and I was a little bit behind.

But Helio didn’t try to capitalize on the issues I was having. He was good like that; we still exchanged notes, so did our engineers, and we usually started the races with very similar cars.

Obviously you caught up and went on to get your second consecutive championship and then for 2002 Roger decided to switch the team from CART to IRL, which was all ovals, using underpowered cars, so you were foot flat to the floor all the way around. Did that suit Helio more than you?

Well… I never made any secret of the fact that I hated the pack races because as a driver you couldn’t make much of a difference. But I managed to win a couple of those and actually they were quite interesting as a challenge… or confusing, I suppose.

I had a hard time understanding what to do to be fast in an IRL car if you’re already flat-out and it’s not fast enough! But some of the other tracks, the short ovals, were handling tracks and both of us qualified at the front on those tracks in ’02 and ’03. Actually, those two years we kept finding ourselves battling wheel to wheel with each other.

Did Helio help you as much as you helped him?

Listen, when you have two competitive teammates who are still open to improving themselves, they raise each other’s game, because one will expose the weaknesses of the other. So I think Helio and I improved our performances overall by being teamed together.

I would see something he was doing a little better than me and I’d think about it and try and get up to that level; and I think the same was true the opposite way. If one was better at in-laps, out-laps, dealing with an understeery car, dealing with an oversteery car, a particular technique – the other one made sure he improved.

So being teamed with a top driver like Helio improved me, definitely. Because I had more experience, people have tried to say I taught him a lot, but actually I could tell you then and I tell you now, it was definitely a two-way street.

That’s what collaboration is all about, and Roger has made sure that has remained in Penske team culture to this day. It was a lot of fun, a good environment, and a productive environment.

And when you retired at the end of 2003, did you continue to be a sounding board for Helio?

Yeah, we continue to speak, and using the same language as when we were teammates. Very open, very friendly.

And what do you think of his decision to stay with Penske and move to sportscars rather than switch teams to squeeze the last bit of juice from his open-wheel career?

Well, he’s still got Indy – let’s not forget that. But I feel Helio is a Penske driver and I don’t see him driving for anyone else. He’s been the longest-serving driver for Penske, the most successful in terms of wins, and his legacy is with Roger.

Helio has contributed to the notoriety and glory of Penske, and vice versa. I understand his loyalty: if I was in his shoes, I would have done the same.

I guess it’s nice that Helio was able to move on while he still was an ace, able to do things like beating all his teammates to pole at Road America, for example…

Yeah; he was still at the top because of his motivation. Even when he was young, one of Helio’s great strengths was his discipline and ability to renew himself.

I learned a lot from him not just in terms of driving but in terms of attitude. He could have a horrendous day and next day he was ready to go again with enthusiasm, and that was true about improving himself, too. You thought he might have met his match and yet he could still come back better the next day or the next weekend.

None of those three things decreased with Helio. The love for what he did stayed and that enthusiasm kept him open-minded, ready to learn from his teammates and engineers.

So he won’t struggle in sportscars…

No, that’s a minor concern for drivers at that level. At Petit Le Mans last month, Helio’s last stint in the car was awesome, so I think he’s making the transition to sportscars no problem.

Will he miss being on the IndyCar grid at St. Petersburg next year? Of course. But if he delivers victories for Penske in IMSA, I think he’ll be very satisfied.

I’m glad to have the chance to talk about Helio in this way because he’s an IndyCar great, one of the very best of the last 20 or 30 years, no question about it. I find him very inspirational as a driver and as a human being – extremely hard-working, extremely disciplined about his craft, extremely studious.

Yes, he’s one of those constantly positive people, but do not mistake that for someone who just shows up and expects to go fast. He is a very dedicated man and I have a tremendous amount of respect for him.

Jones: Spurning Ganassi would have been “biggest mistake of my career”