Feb.14 (GMM) Dario Franchitti insists he has no regrets despite never adding success in Formula One to his list of career achievements. 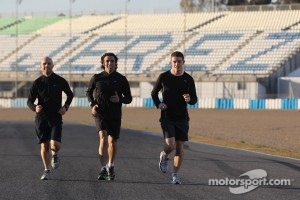 The famous Scot, whose wife is the Hollywood actor Ashley Judd, is the cousin of impressive Force India youngster Paul di Resta.

The four-time Indycar champion and double Indy 500 winner was asked by Sky Sports if, despite flirting with Jaguar at the beginning of last decade, he regrets not having made it to F1.

"It would have been great to race in Formula One at some point, but when the chances were there I didn't take them; I didn't feel that they were better than the opportunities I had in America."

Added Franchitti: "I made the decisions I made, I'm delighted I won a couple of Indy 500s and the four championships, so I wouldn't change that for that world."