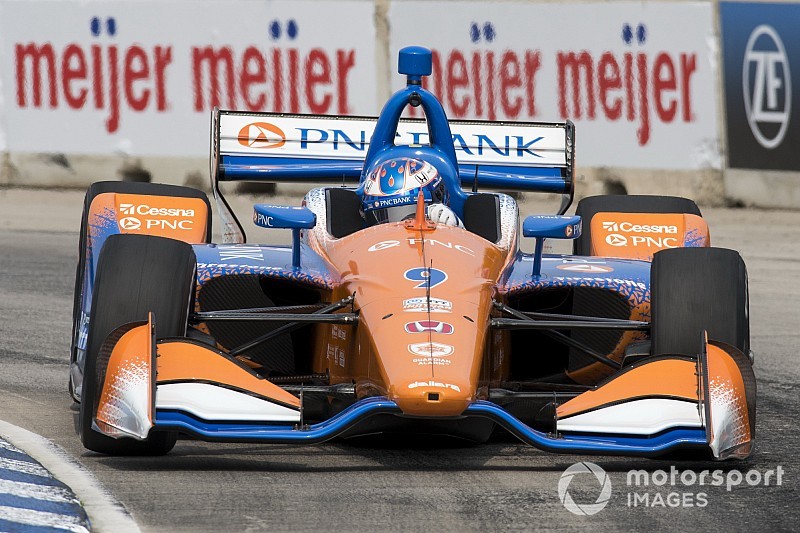 Scott Dixon says his first victory of the season today in Detroit felt especially sweet after a self-inflicted retirement from Race 1 yesterday.

The Chip Ganassi Racing-Honda driver suffered a rare DNF in the Saturday race after breaking a toelink on his right-front suspension against a wall and burying himself in a tire barrier.

Today he led 44 of the 70-lap race and made a two-stop strategy work on a day when most rivals chose to pit three times.

“Today was all about redemption,” said a damp Dixon after taking a dip in the James Scott Memorial Fountain with several members of his crew. “The team nailed the strategy, the car was super fast, we were able to get the mileage we needed to, which was going to be really tough [without] those last couple cautions.”

Asked if it was particularly gratifying after his Saturday gaffe, he said: “Yeah, big-time, more so just for the team. Felt like a bit of an idiot yesterday, especially clipping that inside wall. Honestly, when I hit it, I didn't think it was going to break the suspension. It did.

“We're just happy that we got the win, the first win out of the way this year.”

Dixon was also pleased to regain a lot of championship ground on Team Penske’s Josef Newgarden and Simon Pagenaud, after both were involved in accidents today and were eventually classified 19th and 17th respectively. After yesterday’s failure to finish, Dixon had fallen behind Rahal Letterman Lanigan Racing’s Takuma Sato in the points race, but the Ganassi driver is now back up to fourth, behind Rossi, and only 52 away from points leader Newgarden. Dixon had come into the race 93 points adrift of the top spot.

“Yeah, points-wise it was a big day for us,” he said. “I thought when you get to that 100-point deficit – and we were pretty close to it after yesterday's result – it was going to be tough. But we almost halved that today. We'll keep working on that this week coming with Texas. Hopefully we can get on a bit of a roll here.”

Emphasizing what he told Motorsport.com yesterday, Dixon added: “Going for wins is kind of what you’ve got to do. I think with the competition right now, it's never one other driver you're fighting [for the championship]; it’s a constant five or six people. After Indy, it actually got really tight for the first five or six. Previous to Indy, it seemed like two or three had kind of stretched out.

“This year I think is going to be another year, especially from this point, you're going to have to be really consistent to get a championship. It's how we won last year. We did have three wins, but we were able to turn bad weekends into good ones. We've seen that from Josef [this year] – some pretty average qualifying positions but him and the team have been able to pull out some great podiums, some big wins when they really needed it.”