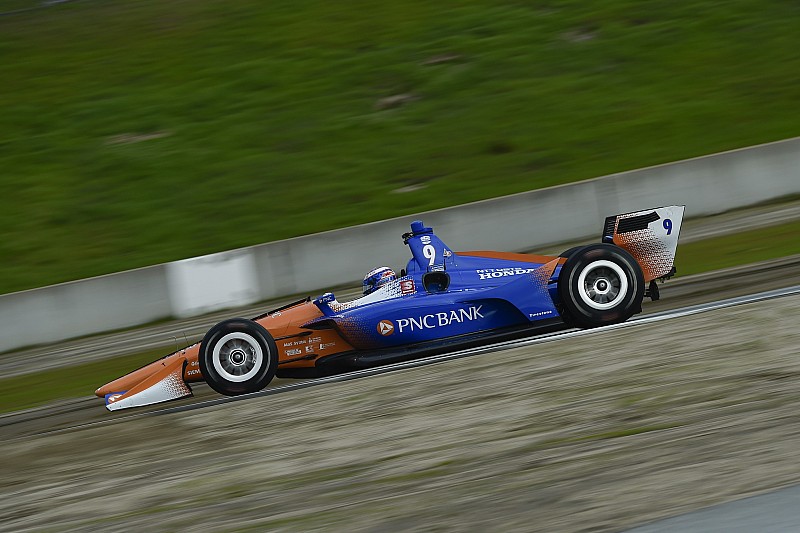 Given the cold and rain-halted test back in February, this was the first reasonably representative lapping at the 2.238-mile road course on the Monterey Peninsula since it returned to the topline U.S. open-wheel calendar for the first time since 2004.

That said, most drivers saved their Firestones until the second hour to allow track temperatures to rise to a more typical afternoon level. Dixon lapped the course in 1min11.100sec, an average speed of 113.317mph, on his fourth of just eight laps.

That put him 0.2885sec clear of Herta’s Harding Steinbrenner Racing-Honda, and 0.37 ahead of Ganassi teammate Rosenqvist.

Jack Harvey kept up his momentum from Portland with a fine fourth for Meyer Shank Racing with Arrow SPM, ahead of Alexander Rossi’s Andretti Autosport-Honda.

Rossi and teammate Ryan Hunter-Reay – who finished the session only 17th – swapped cars at one point, their times in each others’ cars clocking 22nd and 26th times. The two cars were running radically different setups and the team decided that was the most time-efficient way to decide on the best package for the weekend, given that Rossi and RHR have similar taste in car handling.

Championship contender Simon Pagenaud and his Penske teammate Will Power were fastest Chevrolet-powered runners in sixth and seventh, but over half a second off Dixon’s best.

James Hinchcliffe was eighth for Arrow Schmidt Peterson Motorsports-Honda ahead of another rookie, Santino Ferrucci of Dale Coyne Racing-Honda.

Hinch’s teammate Marcus Ericsson turned the most laps in the session at 27 and finished the session 15th, just ahead of Penske’s points leader, Josef Newgarden.