Dixon on fifth championship: “We had a lot of grit”

Scott Dixon attributes his fifth IndyCar title to “a lot of hard work” and “a lot of grit”, after scoring a second place and finishing his season with no DNFs and no finish lower than 12th. 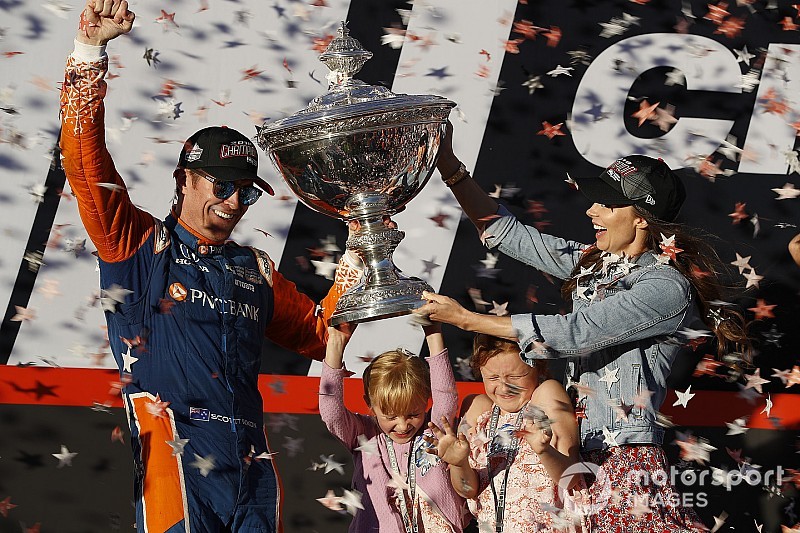 The 37-year-old entered the race 29 points ahead of Alexander Rossi but finished it 57 points ahead. Not only was it his fifth championship but his third in six years. He is now the only driver other than A.J. Foyt to clinch more than four championships.

“It’s all about the people,” said the elated New Zealander. “I’m the lucky one that gets to take it over the line.

“I can’t thank Emma enough, my wife. She’s been so amazing this season and it’s actually the anniversary of her father’s passing today, so it’s obviously an emotional time for her and her family.

“I can’t thank enough everybody involved, my team, my teammates. This doesn’t come without a lot of hard work. We had a lot of grit, we had a lot of things that could have gone wrong today.

“Huge thankyou to PNC for coming on this year, really stepped up the team, Honda has been amazing, NTT Data too, my family, everybody back at home and in England [where Emma’s family is from] and especially my wife.”

Dixon admitted that his escape from the Portland first-lap pile-up had been the point he realized the championship was still on although he did have one misgiving.

“I knew that day we were gonna be lucky coming out of that dust storm in that crash, being hit a few times and being able to pull away,” he commented. “I knew that day was going to be good, but I was just hoping we hadn’t used up everything before we got to the last race.”

He also paid tribute to his fiercest rivals during another classic season-long battle for the championship.

“I’ve got to thank the other teams we’ve fought with, Penske and Andretti, throughout the season. Rossi did a hell of a job, he’s been pushing so hard this year, he’s a huge talent and one who’s going to win many championships throughout his career.”

Dixon was admitted the title pressure reduced “a little bit,” when he heard of Rossi’s opening-lap clash with Andretti.

“We were just making sure we didn’t put ourselves in an awkward place throughout the race that they could capitalize on. For him to almost go down a lap was kind of helping too. But nobody’s ever out. Until we got to the last stop and we were full [on fuel] to the end, even then I could see him on the [scoring] pylon moving through.

“Man, this is so awesome. I can’t believe this actually happened. You always doubt these situations so much that you think it’s never gonna happen. I can’t thank everybody enough, it’s so cool.”