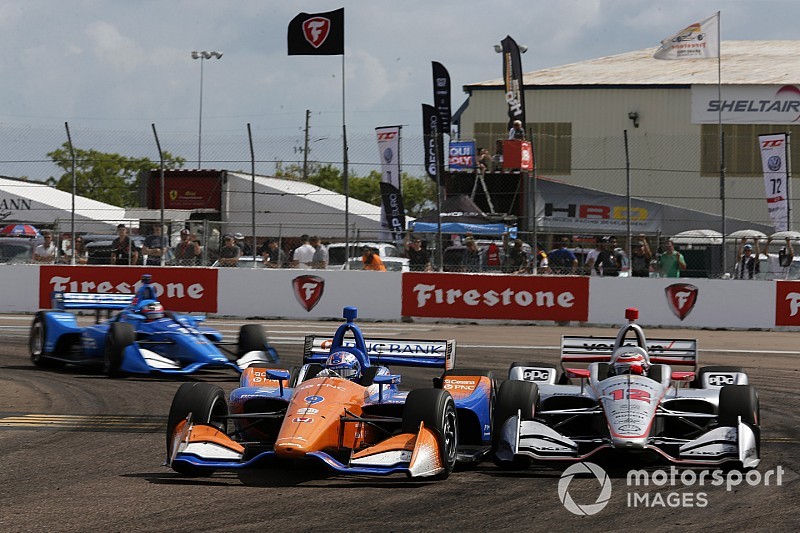 Although runner-up Scott Dixon and third-placed Will Power would have welcomed a second stab at passing St. Petersburg winner Josef Newgarden, both said they welcomed the fact that IndyCar tries to avoid throwing full-course cautions.

When Sebastien Bourdais’ Honda let go early after the first pitstops and when a track banner got strewn across the course at Turn 3, there could feasibly have been full-course cautions. But Race Control elected to stay green because Bourdais was able to wend his way through the block in the Turn 10 escape road, and the banner debris was adjudged far enough off-line to not require a yellow flag.

Asked about those no-calls, Power and Dixon came down firmly on the side of Kyle Novak and ex-Indy car drivers Max Papis and Arie Luyendyk, who have been the triumvirate in Race Control since the start of the 2018 season.

Said Power: “It should be about someone deserving to win. Someone shouldn't win because a random yellow fell at the right time for him.

“All the money and effort that drivers put in to get into this situation and teams put into development, you should win in a deserving manner. That's why I think the “pits closed” [under full-course cautions] – that's the last thing they need to fix in this series for it to be exactly what you say – pure racing.

“You're right, they don't just throw the yellow for anything or debris. It's not an issue. I think it's the right direction.”

Dixon added: “I totally agree. You know, it's nice if it's random and it falls your way, but the possibility of that is pretty slim! We've seen that the last two years here with the result. It was just kind of random, flipped the field.

“It makes for an interesting race maybe, but as Will said, it's not completely fair, and the teams that are really fast, qualify up front, are the ones that get hurt. The leaders always get hurt.

“If there's consistency there, that's great. I think we've had a glimpse of that in the past and then it kind of went haywire for a little bit. All you want is consistency.”

Power said that what cost him the race was getting passed by Dixon’s Chip Ganassi Racing teammate Felix Rosenqvist on the first restart following Ryan Hunter-Reay’s engine failure on the front straight. Power’s pit strategist and team owner Roger Penske had called him in early for his first stop, anticipating Bourdais’ engine detonation causing a full-course caution, but the polesitter reckoned his day would still have been salvageable if he hadn’t lost out to the rookie at Turn 1.

“I think Roger made a call hoping it would go yellow but didn't,” said Power, “but we still were in the game. I felt we were quicker than Rosenqvist, and we could have pulled a big gap, which would have covered for the penalty [of an early stop], but unfortunately, I lost that position and I was stuck there.

“I just had to do everything I could on out-laps after I had to pit earlier than everyone, and third was as good as I could possibly do.”

Regarding his close calls with both Ganassi drivers as they exited the pits, Power said: “It's the driver on track that has the right of way, so unless the guy coming out of the pits is going to clear him… Both times actually it was so close with Scott and Felix, yeah, I expected them to back out because that's a rule. But I was keeping one eye right there just in case!”

Dixon, who eventually passed Power for second at Turn 1, lost it again through Turn 2 then reclaimed it at Turn 3, said he enjoyed their battle but felt his car wasn’t quite a match for the Penskes throughout a stint.

“We always come to these races to win,” said the five-time and reigning series champion. “We came up a little bit short, but it was an interesting race.

“I think between at least the Penske cars and Ganassi cars, it was a bit opposite. I felt our cars were strong for the first 15, 20 laps [of a stint] and especially on restarts as well, but the last sort of five to 10, it flipped the other way and they had some really good speed.

“I had some great battles out there. Will and I had a really tough fight in [Turns] 1, 2, and then all the way to 3 I think it was, and then, you know, it worked out for us.
“But all in all, I think strategy-wise and pit stops, it was a clean day for us. I think if any of us got out front, as Will said, you had some really good pace, you would have been able to capitalize. Josef did that and their strategy, they were able to run and start on used reds and new Reds later. Their pace opened it up.

“I thought [Newgarden] held on pretty well with the used reds at the start to be honest. He fell back a little bit, but… they actually held on pretty good. I was kind of surprised. The lap times were pretty good. He started on used reds [but] you have to by rule run a new set later on. We knew it was going to happen.”