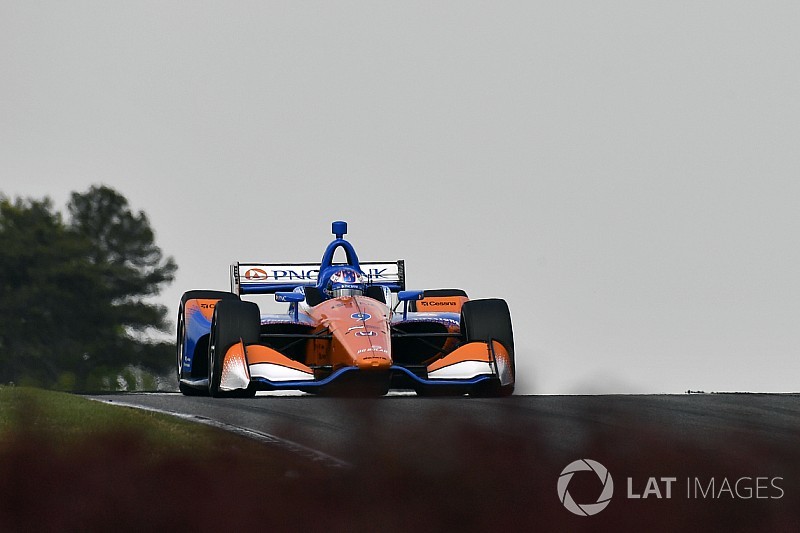 Chip Ganassi Racing's Scott Dixon, who has five second places and two thirds at Barber Motorsports Park, was left regretting a series of issues that prevented him from racking up another podium in Alabama.

The four-time champion had to collect a new visor during the rain-stoppage on Sunday, after it misted up on the inside in the dreadful conditions, then suffered a wheelspeed sensor issue that rendered his pitlane speed-limiter inoperative, costing him time in pitlane as he erred on the side of caution.

The return of rain rendered his attempts to complete race distance on one fuel/tire-stop a failure, and finally he missed out on out-dragging Sebastien Bourdais for fifth on the run to the checkers when his push-to-pass boost switched off.

“I think the one-stop strategy would have put us third,” he said afterward, “but obviously the rain mixed things up and I think we maybe pitted two laps too late in that situation and lost a bunch of track time. Bourdais did the same thing and we found ourselves together at the end there.

“The PNC Bank car was fast, it was good on fuel mileage. I don’t think the #5 [James Hinchcliffe, third-place finisher] or the #6 [Robert Wickens, fourth] would’ve made it had it been dry to the end. But it is what it is.”

Dixon, who has scored just three IndyCar wins since snatching the 2015 IndyCar title on a tie-break with Juan Pablo Montoya, said: “We can’t seem to break out of this funk right now and hopefully we can get on our way shortly and get some good results. Hopefully we can get a break to go our way in a few weeks."

Explaining the lack of visibility on Sunday, Dixon commented: "I think I was one of the drivers on the fence in regards to if we should restart or not yesterday. I guess overall, it was the same for everyone.

“I literally couldn't see a thing from the PNC Bank car and was just trying to hold it straight. Cars were just going by me, and there was nothing I could do because I couldn't see anything out of my visor.”

Of his pitlane issues, he stated: “We lost all wheelspeed sensors which is quite odd. We lost both fronts which made it impossible and you have to go off the rpm [approximately 6700rpm in first gear] and then you try and play it really safe. So we were way down on pitlane, probably losing two or three seconds each stop.”

Regarding his battle with Dale Coyne Racing’s Bourdais who is also Dixon’s teammate in Ganassi’s Ford GT team in IMSA endurance races and at Le Mans, Dixon commented: “I was gonna run him wide at Turn 16, but he gave me room earlier and then obviously he gave me room on the exit.

“As soon as I lifted a little bit more because I was running out of track, it turned off the OT [overtake boost], he had got to the OT and before I realized mine was off it was too late. Had the OT stayed on I think I would have got him on the line.”