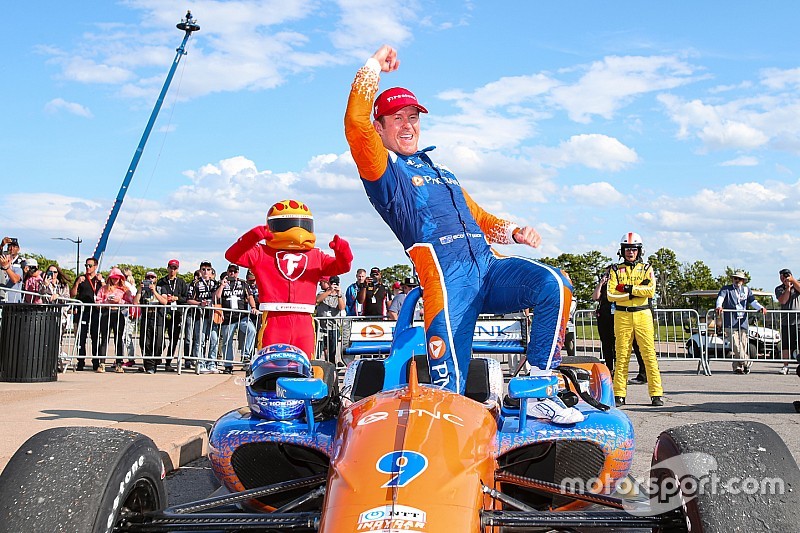 Chip Ganassi Racing’s Scott Dixon went from zero to hero to win the second race in the Chevrolet Detroit Grand Prix double-header, while yesterday’s winner Josef Newgarden went in the opposite direction, crashing out while in the hunt for victory.

Scott Dixon, like all but three of his rivals, started the race on Firestone’s alternate compound tires, but when a Lap 1 caution flew and most of his rivals dived into pitlane to get off those ‘reds’ tires, Dixon stayed out until they lost all grip. He had already pitted by the time Spencer Pigot, following a similar tactic, was rammed by Sebastien Bourdais, and thereafter the Chip Ganassi Racing-Honda driver looked in control.

Race 1 winner Newgarden spun into a tire wall trying to pass James Hinchcliffe – an incident that Alexander Rossi was lucky to escape – while Arrow Schmidt Peterson Motorsports’ tactics for Marcus Ericsson worked perfectly with the caution flag periods, so that he moved up to second.

Will Power, who was stone last near the start of the race after his engine stalled under yellow flag, stormed back to finish third and top Chevrolet driver, while Ryan Hunter-Reay survived a puncture to hold off teammates Rossi and Andretti to the checkered flag.

Polesitter Josef Newgarden held off Andretti Autosport-Honda’s Alexander Rossi at the start while behind him Andretti’s Zach Veach retained his third place ahead of the Harding Steinbrenner Racing-Honda of Colton Herta.

Further back, however, Will Power and Felix Rosenqvist rubbed wheels at Turn 3 which briefly put the Chip Ganassi Racing driver up on two wheels and nudged him into the Carlin-Chevrolet of Patricio O’Ward which then spun. Meanwhile Simon Pagenaud had been struck in the back run into the back of Power, damaged his front wing and got rammed from behind by Tony Kanaan’s AJ Foyt Racing-Chevrolet which also collected the stricken O’Ward.

When the pits opened, most drivers elected to switch from their alternates to primaries, but Scott Dixon and Spencer Pigot stayed out ahead of primary-tired Power, Ferrucci and Rahal and alternate-tired Max Chilton. However, under yellow, Power’s car stalled and required a bumpstart, by which time he had fallen to the back of the field for the Lap 7 restart, although he was still 22sec behind the field at the restart and his gearshift was still not operating properly.

Dixon easily held off Pigot at the wave of the green chased by Ferrucci and Rahal, while erstwhile leader Newgarden got around Chilton for fifth. Rossi, the Arrow Schmidt Peterson Motorsports-Honda of James Hinchcliffe, Herta, Sebastien Bourdais in the Dale Coyne Racing with Vasser-Sullivan machine.

Rossi passed Chilton on Lap 12 to catch back up with Newgarden, but the big news happened up front as Dixon felt his alternate tires proverbially fall off a cliff, so that Ferrucci easily outbraked him for the lead into Turn 3. Meanwhile Pigot had the exact same experience, fell down the order, and was turning and slowing to drive into pitlane but got struck from behind by Bourdais whose car briefly performed a wheelie and shoved the Ed Carpenter Racing car hard against the wall and the attenuator at pitlane entrance. Out came the yellow again, the pits were closed, but Dixon was already in pitlane and would not be penalized. He rejoined ninth.

When the pits opened, several other drivers took the opportunity to stop for a second time, including Marcus Ericsson (Arrow SPM), Takuma Sato (Rahal Letterman Lanigan Racing), Hunter-Reay and Marco Andretti who had made some bold moves in the opening stint.

Power, now using reds, was up to 13th with a deft pass on Andretti at Turn 3 on Lap 23, but just a lap later he pitted for fresh primaries. Up front, Ferrucci and Rahal on low fuel but worn primaries couldn’t pull away from Newgarden, despite the leader setting his fastest lap. Veach and Rosenqvist stopped for more primaries on lap 26, with Rossi and Newgarden following suit one lap and two laps later respectively. Newgarden emerged from the pits still ahead, but neither of them were laughing when they got caught behind slower cars. It allowed Rahal to pit from second on Lap 32 and emerge ahead of them.

Hinchcliffe then pitted from second and emerged right in front of Newgarden, allowing Rossi onto his tail. Newgarden on warm tires pulled out to pass the Arrow SPM car down the inside, Rossi pulled even further to the inside but thought better of it and backed out. That decision saved his race. Newgarden lost control and drifted into the tires, Hinchcliffe half spun into Newgarden, and Rossi revolved his car enough that he just struck Hinchcliffe’s rear wing. Rosenqvist and Sato zapped through the gap in the road, but Rossi got going again in ninth.

Newgarden’s suspension was bent and he abandoned his cockpit, hero to zero in 24 hours, while Hinchcliffe managed to limp back to the pits once he’d been disentangled from the Penske and was sent on his way albeit now a lap down.

One Arrow SPM driver’s misfortune was another’s bonus – Marcus Ericsson would take the restart second, behind Dixon, with Sato in third, followed by Hunter-Reay, Andretti, Rahal, Bourdais (his car perfectly fine since its wheelie and a new nose), Rosenqvist, Rossi, Chilton, Veach and Power.

The Lap 39 restart saw everyone retain their positions, but on Lap 40 Rossi was past Rosenqvist, while Veach, Power and Herta got around Chilton.

A failed attempt to pass Rosenqvist by Bourdais on Lap 44 cost the Frenchman momentum and he was passed by Veach, before pulling into the pits with Herta in tow with 26 to go. To protect getting undercut by this pair, Dixon stopped on Lap 45, with Ericsson and Sato pulling in a lap later. They rejoined in the same order, with Power now at the front, setting fastest lap after fastest lap to try and move up the order before pitting on Lap 49. He re-emerged in fourth right ahead of Sato, Hunter-Reay and Rossi, and he held Sato on the outside despite Taku’s best attempts to outbrake him. That gave Hunter-Reay the perfect opportunity to zap the RLLR car, and Rossi also mugged him.

With 17 laps to go, Dixon held a two second lead over Ericsson, who in turn was 9.5sec up on Power. Jones just had time to duck into the pits before the full-course caution flew for Hinchcliffe whose car ground to a halt in Turn 6.

Dixon was perfection, while Ericsson and Power kept out of each other’s range and clear of the Andretti Autosport cars. Down at turn 4, Sato tried to dive past Rossi, couldn’t make it and was passed by Rosenqvist, and then dropped down the field with a puncture.

Dixon pulled 3.2sec clear of Ericsson within three laps, while the ex-F1 driver pulled two seconds away from Power who was unwilling to use the 28sec of push-to-pass boost he had remaining in case he needed it for a late restart. He could be grateful that his immediate pursuers Hunter-Reay and Rossi had even less.

It was a sound decision from Power. Rosenqvist, having bumped the wall at Turn 11, was left with bent steering, tried to carry on but crashed under braking for Turn 1 at the start of Lap 65. Rather than let the race finish under yellow as the #10 car’s wreck was scooped up, Race Control elected to red-flag it and bring the cars to pitlane.

The red flag lasted only six minutes, and the race restarted at the end of Lap 67, with three laps to go, and there were no order changes from the front-runners, although Ferrucci and O’Ward deposed Herta with two to go.