Dr. Strangerace or: how I learned to stop worrying and love the new IndyCar schedule

Indycar, do we like the schedule or hate it?

The new, shortened schedule of the IndyCar Series has provoked a visceral response from the remaining engaged and invested fans of American open-wheel racing: the vast majority see it as an insult to those who follow the series and a capitulation to the popularity of NASCAR and football. Pondering the fact of the schedule one night, I was pulled into watching the Stanley Kubrick black comedy, Dr. Strangelove or: How I Learned to Stop Worrying and Love the Bomb. Something seemed eerily familiar, and then it hit me. The plot of Dr. Strangelove was paralleling the perceived issues of the IndyCar schedule.

I do love black comedies. In the movie, a rogue Air Force general launches a nuclear attack on Russia that climaxes with a cowboy pilot played by Slim Pickens waving his hat while riding a bomb to earth like a rodeo cowboy. And no, the connection to Randy Bernard is not lost on me. He lost his job before I could use the idea. But the theme of following a flawed protocol to an inevitable bad end was not lost on me. It reminded me of the debate on the current IndyCar schedule. 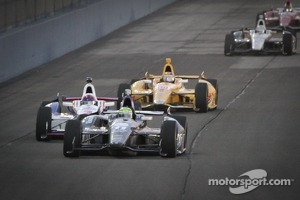 Here is where my argument takes an ironic turn. I don’t think the new schedule is flawed. The old one was. While attendance at events is vital to allow promoters to make a profit, it is more important in the long run to increase television viewership to attract sponsorship and provide a means for the teams to make a profit. Mark Miles, the series’ Dr. Strangelove, is moving in the right direction.

Dr. Strangelove, played by Peter Sellers, is the President’s scientific advisor and counsels the POTUS on how to deal with the reality of mutually assured destruction. Similarly, Mark Miles is navigating the politics of making a marginalized niche series, one possibly headed to financial destruction, into a viable money-making proposition. To do this, he has made, and will make, decisions unpopular with the core constituency of the small but rabid IndyCar fan base.

His first decision was to shorten the window of the North American schedule to avoid the Chase in NASCAR and both college football Saturdays and NFL Sundays. Again, Miles wants to improve viewership on television to bring in presenting sponsors for both the promoter and the networks. Everyone needs to eat. The networks need to sell advertising; the promoters need to sell presenting sponsorship; the series needs to receive sanctioning fees; the teams need to make money…somehow. The series’ window provides the best opportunity for the networks to generate viewership. The series’ on-air competition with other sports during the new IndyCar schedule is not quite as stout. The new series’ window provides the best opportunity for promoters to find presenting sponsors. Again, the competition is less robust. And if ratings improve, sponsorship opportunities will improve, also. The series has some wiggle room with sanctioning fees, but it must have a long-term commitment from promoters and networks to make deals. Again, the television ratings for the new, shortened schedule will dictate everything.

But what about the teams? The unfortunate truth is that they seem to come last in the pecking order of who needs to make money. The history of IndyCar shows that tire and engine makers subsidized the teams while sponsorship made up most of the difference. No more. The teams are spending more on equipment and making less on sponsorship while purses at all races except the Indy 500 are too pitifully small to make a difference. How will Dr. Strangemiles manage to fatten the purses of the teams? Easy answer: international races. 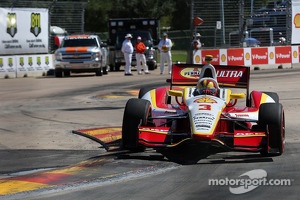 International races are coming. Period. Miles has floated the idea and has vast international sports’ experience from his time running the ATP (Association of Tennis Professionals). His membership played tournaments where they could make the most money. That’s the whole idea, isn’t it? A short South American series in the spring and another set of rounds in Europe, Asia, India, and/or the Middle East would make sense. To host these races, the promoters will need to have solid sponsorship and financial backing that will pay the teams’ expenses and put some money in the pockets of the owners. As much as I want to say it is all about the fans, that is not true. The fans are an important constituency, but they are not the only one. As I said before, everyone has to eat.

Before the schedule detractors start jerking their knees, let’s look at the old schedule. There were massive gaps between events that stopped any momentum the series developed, and everyone complained about it! That problem has been solved. The same unhappy fans will say that foreign events are in different time zones. South America is pretty close in terms of time. And Europe and the Middle East will occupy the same early Saturday or Sunday time that F1 and Premier League soccer occupy now. That is still watchable, right? And if one or two races find themselves in Australia or Asia, then I guess the DVR will be put to good use. The American sports public records events all the time. It is not an issue.

The same people will complain about the championship. How can we care about races that don’t count? My guess is that any South American races will be run before the series opens at St. Pete and may eventually be points-paying races. The championship still needs to end on Labor Day, and it needs to conclude in North America to satisfy the fans, sponsors, and television partners. The fall rounds could be an exhibition series, but I can envision a set of races with a sponsor’s trophy at the end. Call it the Dr. Strangleove Cup, if you will.

At the end of the day, the fans will be happy because the series will survive and maybe even thrive. Embrace the changes. If economic history has taught us anything, it is that a business has to be nimble and able to adapt if it wants to survive. In Dr. Strangelove, the title character advises the POTUS to move people underground to survive the Doomsday weapon of the USSR. Likewise, Mark Miles and his new schedule are reacting to the reality of the sporting and economic landscapes. In the end, the series will survive because someone made hard and unpopular decisions. Then again, maybe it will be like Slim Pickens as Major “King” Kong, riding the nuclear bomb to the ground yelling, “Yahoo!” In IndyCar’s case, I hope it is not an example of art imitating life.

Legendary 1969 Indy 500 winner Andretti to be honored at IMS

Sibling rivalry: the plight of the GP of Indianapolis