While the Midwest is getting pounded by frigid temperatures and snow, most of the IndyCar Series teams are heading to the South or West to prepare for the 2014 racing campaign.

While the Midwest is getting pounded by frigid temperatures and snow, most of the IndyCar Series teams are heading to the South or West to prepare for the 2014 racing campaign.

Testing is essential for the top organizations in the high-competitive world of IndyCar racing. With changes to the power plants this year as well as continued development of the chassis, springs and shocks, every driver and team needs to work on car setups for the upcoming 18-race trail.

At Ed Carpenter Racing, the planning of its testing program began back before the 2013 season was completed. ECR engineering head Matt Barnes and his talented staff have worked diligently since the season finale at Fontana, Calif., in October to arrange a solid testing strategy in the team’s search for speed and consistency.

ECR team drivers Ed Carpenter (ovals) and Mike Conway (road/streets) have already been behind the wheel of the No. 20 Fuzzy’s Ultra Premium Vodka Chevrolet this winter to learn more information for the 2014 season. 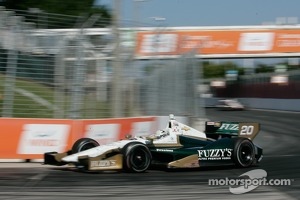 Barnes explains that his contingent in the engineering department established a game plan back in September so they can have testing dates and equipment ready to go when the off-season begins.

“Getting the dates for the tests is the first step,” says Barnes, an IndyCar Series veteran and Colorado State University graduate. “We don’t know the testing rules until close to the end of the previous season. They usually have a preliminary set of testing rules by the last race. They usually cover the tests through the end of the year. Then they come out with a new set of rules for the next year that begins on Jan. 1.”

Barnes explains that his squad must draw up a testing plan around the 18 test days allowed to his racing team.

“We have 18 test days for the 2014 season,” Barnes said. “That includes all on-track testing and full-scale wind tunnel testing. You have to split your tests over those 18 days. That also includes open tests. Manufacturers’ (from Chevrolet and Honda) days are also included in those testing days.”

It’s interesting to see how the various test programs are developed especially with the differences between the oval tests and the road/street off-season efforts.

“On an oval track, you usually want to test a race setup,” Barnes explains. “A team and driver want to run in traffic if possible. At a road course, you could basically be by yourself if you want. Then you can do things all day to improve the car. At a road circuit, you tend to change a lot of things. You like to have a checklist to go through so you would have a good place to start on a race weekend.”

Barnes also says that the checklist can change during a test day if the car setup is not to the driver’s liking.

“Trying to stay focused on the test plan is the most important thing,” he admits. “You still can be learning about your car even if you are not as fast as others. Often, the manufacturers are doing different programs too.”

The testing for an IndyCar team is difficult when trying to simulate a street course since the teams never get to test on the actual track such as St. Petersburg, Long Beach, Detroit and Toronto. Barnes says that only one venue is available that can help a team for a street race.

“We basically have to go to Sebring and run their small course on the back side of the larger circuit,” says Matt, whose engineering staff includes Brent Harvey, Ben Siegel, Joe Howard and Ed Delporte. “That course is 1.67 miles. It’s not ideal but it is the closest basic setup for a street course. That is the place everyone goes to do their street course testing. Plus the weather is better there in the winter for testing.

The team retrieves as much information in testing as possible but Barnes admits that many times they start with car setups for the street race from the year previously.

“Depending on how successful the team was the previous year, you can start out with last year’s setup at those tracks,” he said. “You might have learned some things at testing like in damping (shocks) or other items you can apply. But it is usually situational if you have a similar problem in testing that you have at that track now. You can then apply the same logic.”

Conway, a past Long Beach and Detroit winner, is new to Ed Carpenter Racing in 2014. Mike might have different setup ideas from Carpenter in the Fuzzy’s Vodka Chevy, but Barnes says earlier testing has been great with the England native.

“That will be our biggest challenge in starting out with Mike,” Barnes admits. “We know what Ed liked in the car but will Mike like that too? There will be a learning curve for both the team and Mike. So we’ll have to learn his style at those tracks as well. So far Mike has been tremendous at the tests.”

Barnes says that Conway is similar to Carpenter in communicated the car’s tendencies.

“Mike is calm and a lot like Ed.” He explained. “Mike gives very good feedback which Ed does too. Mike has a really good feel for the race car. And I think we will be able to use that to give him what he needs. Both Mike and Ed get their message across to the engineering staff.

“We’ll learn more about Mike after his first race. I was familiar with Mike’s feedback when I was at Andretti. I didn’t work on his car directly but we had team meetings together. So I know his personality and that is good for the team. I think we have high expectations what we can accomplish with Mike this year.”

Barnes and his engineering staff have been impressed with Conway’s initial test runs and expect to learn more in the upcoming months.

“Our testing has gone well for us thus far especially with the new 2014 Chevrolet motor,” he said. “Running a new engine for the first time, you expect a lot more down time. But we didn’t really have any down time and that was very good. Mike has been fast initially and we expected that from his road racing background. Testing is very important during this time of the year.”

The IndyCar Series kickoffs on March 28-30 with the Firestone Grand Prix of St. Petersburg. ABC-TV will telecast the race live on March 30 at 3:30 p.m. EST.