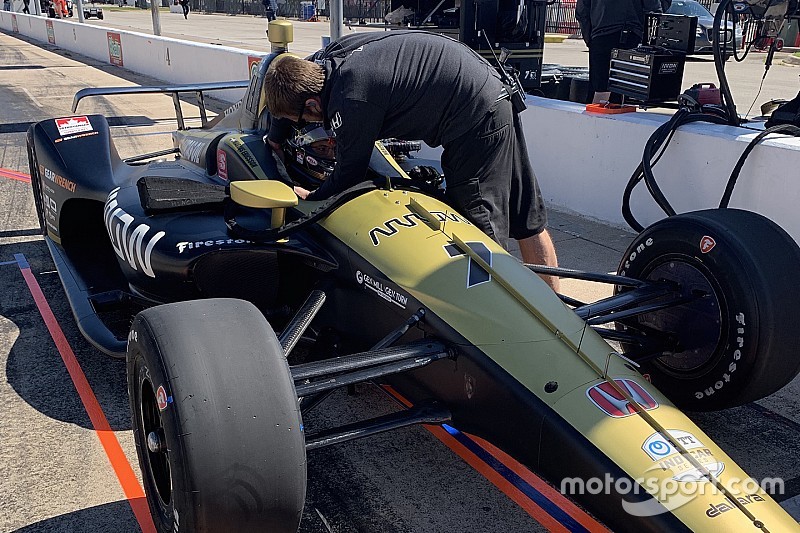 IndyCar rookie Marcus Ericsson says he enjoyed his first test on an oval, at Texas Motor Speedway, but admitted it that there was “so much to learn” and that “it’s one thing to talk about it, but another to actually do it.”

Arrow Schmidt Peterson Motorsports (Ericsson), Harding Steinbrenner Racing (Colton Herta) and Ben Hanley (DragonSpeed) tested at TMS on Friday for their first experiences of an oval in an IndyCar, although Herta’s two years in Indy Lights means he has competed on ovals before.

The rookie test was held in preparation for the 28-car test to be held at Indianapolis Motor Speedway next Wednesday, April 24. Felix Rosenqvist of Chip Ganassi Racing already completed his first rookie IndyCar oval test – also held at Texas MS – back in March.

"I thought it was really really good, I really enjoyed it,” Ericsson told Motorsport.com. “It was very different from anything I’ve done before.

“In the beginning it was quite difficult because you’ve got to really trust the car, and it’s one thing to talk about it but another to actually do it… It was still different from what I expected and it took a bit of time. But after the lunch break it felt good and I was getting more and more comfortable. It was a very interesting day and there was a lot to take in.

“The first half of the day my feedback was… well, I wasn’t really sure what was going on with the car! So many things to learn. So if they asked me, ‘How does it feel?’ all I could say was, ‘I don’t know. It just feels different.’ But then towards the end of the day I could start to give them feedback and feel what the car was doing on entry, mid-corner and exit and could tell them what I needed from it.

“Obviously, because it was the first ever oval test for me, the team dialed a bit more understeer in than normal, to make sure I felt confident with the rear of the car. It was pretty gusty and windy, and I think [ambient] temperatures were only 70-ish. I did about 60 laps in the morning, about 85 in the afternoon.”

Ericsson admitted he was intrigued by the differences in the two ends of the oval, although he had been given a heads-up by teammates James Hinchcliffe and Robert Wickens.

“Turn 3 and 4 were pretty straightforward, and especially on my second run I felt very comfortable there,” he explained. “The banking starts quite early so you feel the car is quite nice right from the entry phase of T3 and all through to the exit of T4. But they’re totally different from Turns 1 and 2, which I was struggling to get my head around.

“I had James there with me and I spoke with Robbie about it a lot before the test and they had told me exactly that – Turns 3 and 4 are fine but Turns 1 and 2 are tricky. But by the end of the day I was feeling good there as well.”

Ericsson said the ethos necessary for fast oval running is quite different from the approach taken to road or street courses.

“Where or how you enter Turn 1 will decide where you come out of Turn 2 and onto the back straight,” he observed. “And if you get those two right, you will do T3 and 4 better as well.

“On an oval everything is connected, and it’s all about that momentum, and that’s quite different from a road or street course, where a lot of the time you can get one corner wrong but be right back on it at the next corner.”

Speaking of road courses, Ericsson said his steering was set up the way most oval rookies prefer, with the car biased for turn-in, but the steering wheel in ‘genuine’ alignment.

“I think I ran the normal Arrow SPM setup,” he said, “where you’re keeping pressure to the right on the straights, and then you relax that pressure coming into the turn and the car starts turning itself. That didn’t feel too strange, it was quite normal.

“Yeah, I know what you mean about the steering wheel. Some people like to have their steering actually turned slightly to the right for the straights so it’s straight ahead in the turns, but mine was a bit more set up like for a road course.”

The 28-year-old Swede says there is still much to learn when his #7 Arrow SPM-Honda hits the famed 2.5-mile IMS at 1pm ET on Wednesday.

“This test, we were mostly doing shorter runs, around 10 laps, getting comfortable and taking it step by step.

“I think experimenting with lines for what’s the fastest way, and what line looks after the tires best over a long run… things like that will wait until Indy.

“Same with dirty air. Colton was there and Ben Hanley, but we didn’t run right behind each other. That’s the next big step for me, isn’t it? Now that I feel comfortable on the oval, I must learn to drive in traffic.”