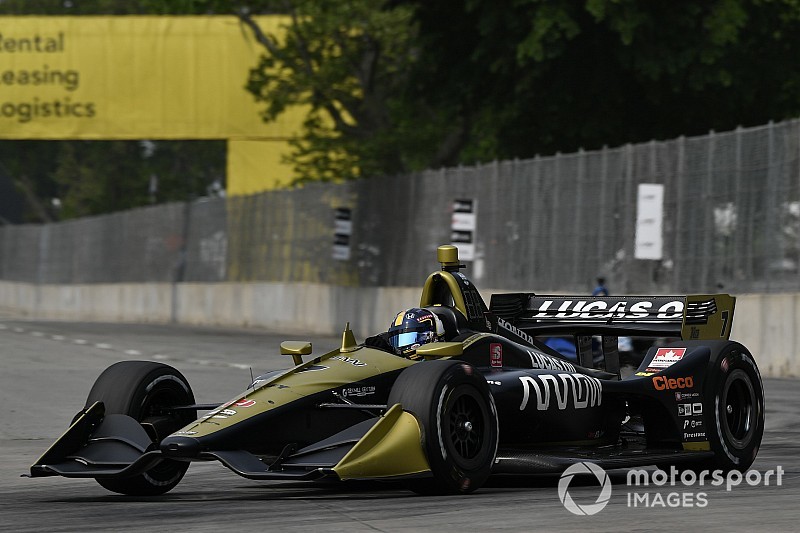 Arrow Schmidt Peterson Motorsports driver Marcus Ericsson says his runner-up finish in the second race of the Chevrolet Detroit Grand Prix will be big news in his native country, as the first Swede on an IndyCar podium since Kenny Brack took second at Motegi in 2003.

Ericsson not only led a couple of laps, he also ran second for almost the entire second half of the 70-lap race, finishing two seconds behind winner Scott Dixon and two seconds ahead of Will Power.

“I have a great following from back home in Sweden, around the world I would say,” said the 28-year-old ex-F1 driver. “I got tons of support from back home. I know the races there are shown live. I know a lot of people are watching them, sending support from there.

“So I expect it to be, yeah, quite big news back home. That's been the great thing this year. With both me and Felix [Rosenqvist] coming to the series, there's been so much attention in Sweden, Swedish media. Also so many fans writing to me, saying, ‘Such a great series, it's so fun to watch, it's so exciting to see you fight for top positions.’ Fans are really excited about that.

“I'm sure when I check my phone later, there's going to be lots of things going on. But, yeah, I'm proud of that support. I'm happy to show them or give them a result like today.”

Ericsson also revealed that some of his former colleagues on the Alfa Romeo Sauber Formula 1 team had attended the event.

“Ten of the guys from Alfa Romeo that have been working for me the last few years were here supporting me this weekend. Obviously they go to Montreal next weekend [for the Canadian F1 Grand Prix]. It was good to see them. They must have brought some good luck, as well. It was good.”
This was Ericsson’s first podium since finishing third behind Alexander Rossi and Jolyon Palmer in GP2 five-and-a-half years ago.

He said: “I'm super happy. It's been one of those years where we've had pretty much every weekend good pace, but for some reason there's always been something that's happened that’s made it not come together result-wise. I think our results have not been sort of representative of the pace we've got.

“That's why it was such a nice feeling finally to get it together for a whole race today. Even in quali we had a great car. I didn't get the perfect lap together, but in the race executed very well. The team did great strategy calls, pit stops. I have to thank the crew because they did an amazing job.

“Yeah, it's just a great feeling to be on the podium again.”

Power: Second podium of the year “felt like a win”