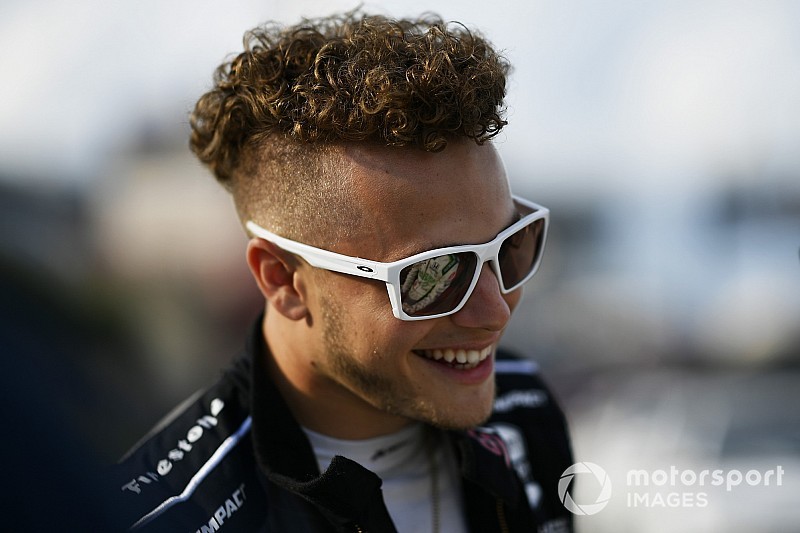 Santino Ferrucci’s persistence, consistency and flair on ovals have seen him take the lead in IndyCar’s Rookie of the Year standings, following a fourth place at Texas Motor Speedway last Saturday night.

The ex-Formula 2 driver competed in four IndyCar races last year – the Detroit double-header, Portland and Sonoma – but the results were promising if inconclusive as the Connecticut 20-year-old was having to learn the handling traits of an IndyCar as well as the tracks.

However, this year he has made very few significant errors, earned Rookie of the Year at the Indianapolis 500 with a seventh-place finish, and grabbed fourth place at Texas last Saturday night with a late surge past Indy 500 winner Simon Pagenaud while also keeping Ryan Hunter-Reay in his mirrors.

Ferrucci has also completed all but two laps of this year’s nine-race-old season, more than any other driver. Thus despite Herta winning at Circuit of The Americas and Ericsson earning a runner-up finish in the second Detroit race, Ferrucci’s consistency and ability to steer clear of trouble has enabled him to move to the top of the Rookie standings.

“I can't thank my crew enough,” he enthused after the Texas race. “We had a stellar crew in the pits, they did fantastic stops and we just made our way to the front while avoiding a couple of incidents in front of us. I can't thank my spotter Pancho [Carter, ex-sprint and midget champion who also scored a win in Indy cars] enough to get me to push my limits in the car, coaching me throughout the race.

“To bring home a top five, my first one in the NTT IndyCar Series, feels pretty good. For someone who had no experience on ovals, I'm starting to say I love them. I'm happy with a fourth place.

“After Indy, knowing what kind of car we had, how hard our crew has been working and how much power we have from Honda as well, I knew we could do something special here, regardless of what happened in qualifying, and we did.”

Team owner Dale Coyne points out that Ferrucci’s performances, particularly on ovals, have been eye-catching for all the right reasons, and that his improvement from 18th in qualifying to fourth at Texas Motor Speedway was not just down to others’ errors.

“Santino passed seven cars on track last Saturday,” Coyne told Motorsport.com. “It wasn’t just being around at the end when others crashed: he passed seven cars on a night when everyone was saying it was hard to pass. He had one little wiggle, but he drove through it – that’s what you’ve got to do sometimes – and other than that he was solid all race.

“I am surprised – pleasantly surprised and impressed – at how he’s gone on the ovals. Heading into Indy I was a little worried that he was going to be quick but maybe an accident looking for a place to happen. But on Fast Friday [the Friday with extra turbo boost in preparation for qualifying] he had a wiggle in Turn 2 but immediately came into the pits and asked if we could fix it. That showed a lot of maturity – to react to a warning sign, like you’ve got to do on high-speed ovals – and come and make an adjustment instead of pushing and pushing until he had an accident. That day, Santino matured as an oval driver and he hasn’t looked back since.”

Coyne says that he’s fine with Ferrucci and his veteran teammate Sebastien Bourdais having very different driving styles on the road and street courses.

“Yeah, that happens,” he shrugged, “and you just have to realize that and react in the right way. Some drivers get with a team that tells them, ‘This is the fast way, you have to change the way you drive.’ I hear that happens in Europe all the time. But I think that’s not smart, because drivers have different feel for a car. Some prefer to steer it from the front, some from the rear, some just want it neutral.

“I’ve always believed the car should be set up to suit the driver – that’s our responsibility as a team. The responsibility of the driver is communicating how the car is right now and what he wants it to do to make it faster. And then he’s got to prove that on track, too, obviously!

“And so far Santino’s been working very well with Michael Cannon [race engineer]. He’s a kid so he grew up on simulators so he’s lived his life thinking about feedback and I think that’s why he’s pretty good at it. He could still be better – you’re always going to say that, right? – but he’s certainly above par.”

Coyne, who has a reputation for taking on rookies including ones who have little or no prior experience of the U.S. open-wheel environment, says Ferrucci has adapted well to the ‘friendlier’ nature of the IndyCar paddock.

“I think it’s been part of the maturing process,” he commented. “I think he’s seen that drivers here are more willing to talk through issues up front instead of through the media, and they get on better. They’re generally pretty respectful to each other.

“Santino got out of the car at Texas and the first thing he did was go and congratulate Rahal who finished just in front of him and Hunter-Reay who finished just behind him. You don’t see drivers normally bother doing that; it’s a nice thing to do. And inside the team, he’s carried himself very, very well, too.”

Asked if he will be able to keep him another season, Coyne replied, “Yeah, we have an agreement with him for 2020. And I think he just needs more experience for him to keep getting better and better, and obviously we want to benefit from that. We don’t want to be training him up for someone else to take him from us!”

Especially not when he proves to be a handyman around the DCR race shop:

Rossi: “It sucks… we’re always playing bridesmaid as of late”