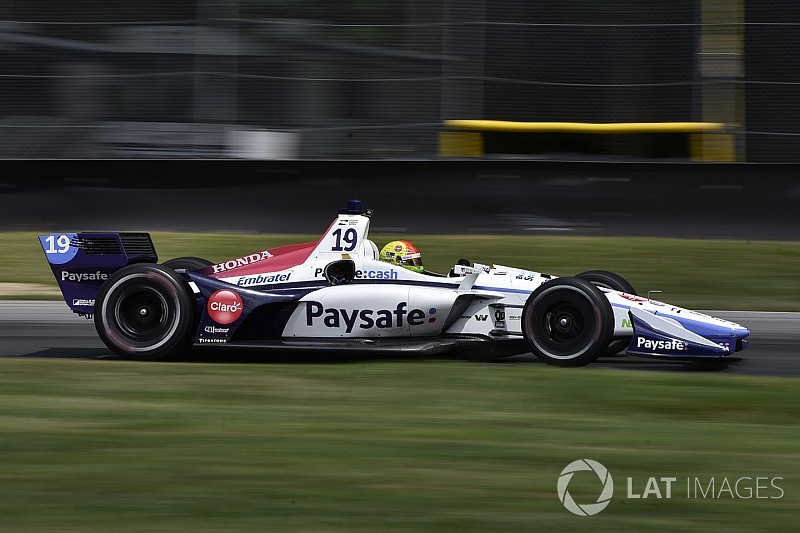 Pietro Fittipaldi says he’s “not interested” in racing in Formula 2 next year, and is instead focused on landing a full-time ride in IndyCar or Formula 1.

Fittipaldi, who broke both legs in a WEC shunt at Spa-Francorchamps in May, makes his racing return this weekend driving for Dale Coyne Racing at Mid-Ohio, and will remain in the #19 DCR-Honda for the remaining four rounds – Pocono, Gateway, Portland and Sonoma.

Santino Ferrucci, who subbed for Fittipaldi at Detroit, was recently let go by the Trident Formula 2 team, and his continuation as Haas F1 development driver has not yet been confirmed.

But Fittipaldi, the World Series Formula V8 3.5 champion, says he had no interest in Ferrucci's F2 drive, although he admits to further conversations with Gunther Steiner, Haas F1’s team principal.

“My goal is not at all F2,” Fittipaldi told Motorsport.com. “If there is an opportunity in Formula 1 or IndyCar fulltime, I will do that for sure. Formula E is interesting too. But F2 is not something I’m looking at even if I had the opportunity.

“Formula 1 as a reserve driver would be OK, but I still want to be racing something full-time. That’s my goal. Anyway, the opportunity to be reserve driver for Haas still has to present itself.

“I spoke to Gunther again a couple of weeks ago and there might be some opportunities to test at the end of the year.

"But the focus for now is here, IndyCar," he added, explaining that his further involvement in Super Formula is now uncertain.

“Feels better” on race return than in test

Fittipaldi tested at Mid-Ohio Sports Car course last week, but says he feels even better now that he’s into a race weekend once more.

The 24-year-old was 1.5sec off teammate Sebastien Bourdais’ best effort in the Friday morning session, but when all the teams tried the softer alternate compound red-sidewalled Firestones in FP2, Fittipaldi reduced that deficit to 0.4sec – although Dale Coyne says Bourdais didn’t get a truly representative lap on the reds. The pair finished the day 14th and 18th.

Said Fittipaldi: “When you get back in a car after a long time, then go away and sleep on it, and then return again, it feels better,” he said. “It’s good to have Sebastien here so we have two cars and can try different setups to come to a conclusion before qualifying. He’s very experienced and very good at that.

“My goal was to be in the top 10 this weekend, and that’s going to be difficult, but we know what we have to do to improve.”

Fittipaldi said he welcomed IndyCar’s rule that allows drivers to run a set of alternate-compound Firestones in second practice, as he had never tried them before. The so-called ‘reds’, as used on street and road courses, are never made available in testing and Fittipaldi’s only previous IndyCar start was on the Phoenix ISM Raceway oval.

“This was the first time I used reds and I don’t feel I got enough out of them,” Fittipaldi admitted. “They go off pretty quick and I felt like I was on it but then I pushed over the limit, made a mistake.

“But at least it was good to try before qualifying, to get the feel, because it’s not like you just gain grip overall. The fronts gain more or the rears gain more, and you have to adjust your car to that.

"So now with that bit of experience I can anticipate it and tell my engineer [Michael Cannon], ‘The car needs to feel looser on blacks,’ or ‘We need to have more understeer on blacks’ so when we change to reds the car has a good balance.”

Fittipaldi asked Cannon to change the brake master-cylinder to make it more sensitive, but said it wasn’t so much a corollary of his recovering left leg (the more badly broken of the two) and more to do with checking if he could get better braking performance.

“I just wanted to try it,” he said. “I can brake well with the bigger master cylinder, but I wanted to try the smaller one to see if I could get more braking potential.”