INDIANAPOLIS (Wednesday, Aug. 1, 2012) - Surprise and strategy will accentuate the push-to-pass system for the Honda Indy 200 at Mid-Ohio on Aug. 5. 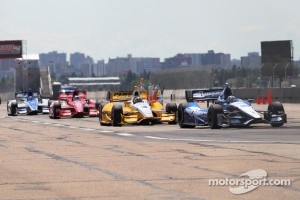 INDYCAR, the sanctioning body of the IZOD IndyCar Series, will introduce a five-second delay to the overtake assist for the 85-lap race on the 2.258-mile, 13-turn road course. A total of 100 seconds will be afforded drivers, with a maximum of 20 seconds per activation. There's no recharge time between activations.

"After that five seconds, when the driver gets to full throttle or already is at full throttle, the overtake will come on. That's to stop from using it as a push to defend," said Trevor Knowles, INDYCAR's director of engine development. "They'll have to plan ahead."

An example this weekend is the Keyhole at Mid-Ohio Sports Car Course - a long straight leading into a looping right-hand turn to another long straight. It's .44 of a mile from the Turn 2 braking zone, down the straight and into the entrance of Turn 3.

"You can push the button before you get to the braking zone and when you get on the throttle it will be on overtake," Knowles explained. "If you're the car in front trying to defend, the TV won't show when the competitor has pushed it. It will only show when the overtake is active. If he responds, he has five seconds before his overtake cuts in."

The overtake assist feature, introduced to the series in 2009, allows a driver to add turbocharger boost and additional RPMs with the press of a button on the steering wheel. When the system is engaged, the turbocharger boost increases to 161 kPa with an additional 200 RPMs on the 2.2-liter V6 engines supplied by Chevrolet, Honda and Lotus.

The system has been utilized at Toronto and Edmonton and will be included at the road/street course events at Sonoma and Baltimore, too.

Knowles said INDYCAR will consider adding an overtake lockout/recharge period, "but we didn't want to introduce too many things at one time."