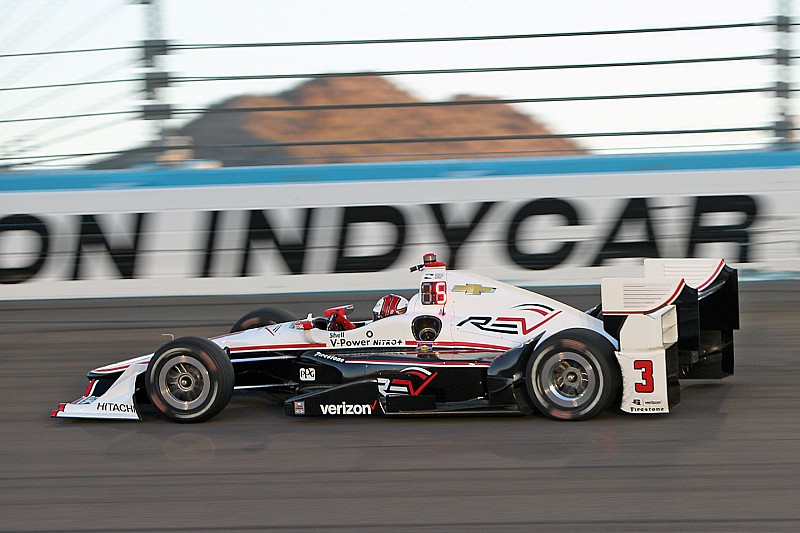 At last, the wait is over: this Friday and Saturday, we get to see the Verizon IndyCar Series contenders running together again in the first open test of the season, at Phoenix International Raceway.

For some drivers, it will mark the first time they’ve turned a wheel in an IndyCar since last year’s season finale at Sonoma. At the other end of the extreme is Ed Jones, who spent yesterday (Wednesday) pounding out 120 laps of the 1.022-mile oval in his #19 Dale Coyne Racing-Honda, as part of his rookie test.

As the only fulltime rookie in the IndyCar field this year, Jones hasn’t got a lot to beat, and as a runner-up in last year’s Indy Lights race here at PIR, he doesn't have a lot to learn about the track. But putting an IndyCar through its paces at PIR is nonetheless an eye-bulging and bicep-building experience.

Which brings us onto the first point…

Can anyone – should anyone – beat last year’s pole speed?

The short answers to those two questions are, “Yes they probably can,” and, “No, they probably shouldn’t.” If you are among the rising tide of fans, drivers and engineers who think downforce has gotten way out of control in IndyCar since the aerokits were brought in, then you’ll have been impressed and worried by Helio Castroneves’ Phoenix pole speed last year of 192.7mph.

When folks are wringing their hands over the rights and wrongs of passive safety measures such as halos, aeroscreens and the like, it smells a bit like hypocrisy when active safety measures are disregarded. Those active safety measures would include an IndyCar-imposed setup that is light on downforce, so drivers can feel the limit of adhesion even when the track gets gripped up with rubber, and thus have time to catch the car before pounding the wall. That setup would also be one that put the emphasis on driver skill, by reducing downforce and drag to create a far greater disparity between terminal speeds on straights and apex speeds.

Most of us feel like we’ve been beating this drum forever, and if it’s getting repetitive, that doesn’t make it less valid. Hopefully those in charge will take a drastically different approach when devising the 2018 universal aerokit’s short-oval and superspeedway package. While one can admire the drivers for being able to withstand 5g, such loads add nothing to the spectacle and reduce the skill required. Give me a Charles “Sonny” Liston over a Charles Atlas, any day.

Last year Scott Dixon dominated the second half of the Phoenix race and won – using Chevrolet power. One of the most interesting questions that can only be answered once we’ve visited all types of tracks at least once in 2017, will be, “How much can Chip Ganassi Racing elevate Honda’s winning potential on any given weekend?”

Penske-Chevrolet driver Will Power recently told Motorsport.com that “having a team like Ganassi running Honda will be the first time we’ve had a true indication of where Honda are, relative to Chevy.” And with all due respect to Rahal Letterman Lanigan Racing, Schmidt Peterson Motorsport and Andretti Autosport, he’s probably right. Rahal and Schmidt showed regular flashes of form last year, but it surely does take a four-car team to disseminate the data rapidly enough to make notable progress from the start of a weekend to the end.

So what can Ganassi show us at the test? Well, last year at Phoenix in qualifying, only one Chevy started behind a Honda, and the fastest of HPD’s runners (Marco Andretti) was 3.25mph off Castroneves’ pole speed, which certainly isn’t encouraging for Dixon, Tony Kanaan, Charlie Kimball and Max Chilton, not in a year where IndyCar has frozen aerokit development.

However, as we saw at Indianapolis, Texas Motor Speedway and Pocono, HPD made a notable step on superspeedways, although as one race engineer from a Honda team observed, “Even now, it’s hard to pinpoint if that’s down to our aerokit being stronger than Chevy’s or our engine.”

Whatever, he agreed, if HPD’s improved performance on the longest ovals was down to a slightly stronger engine, superiority at 1.3-bar turbo boost, as used on superspeedways, does not guarantee a similar margin at the short oval setting of 1.4-bar, nor the road/street course 1.5-bar boost.

So if Kanaan and Dixon are up in the top six at the end of the test, it's a very positive sign for both Honda and for all of us wanting to see Ganassi take on Penske in a straight fight.

Carlos Munoz and Conor Daly have fewer than 60 IndyCar starts between them, and aside from Munoz's emergency sub job at Panther Racing in Toronto four years ago, they have only driven HPD engines. AJ Foyt Racing as a team has run nothing but Honda units since 2005.

That’s all changed for 2017 as Foyt has replaced Takuma Sato and Jack Hawksworth with Munoz and Daly and signed up with Chevrolet. As a point of reference, last year Foyt's cars started 17th and 21st at Phoenix, the latter a legacy of Takuma Sato shunting in practice and the car not being repaired in time for qualifying. This test will show us if the team's much-needed U-turn has begun.

Don’t downplay the arrival of Will Phillips as technical director and Munoz’s race engineer. As IndyCar’s former VP of technology, there should be little he doesn’t know about setting up the current Dallara. So long as he and Munoz listen to each other, the Texas-based arm of the team should be in great shape, while that rising tide should also float the other boat, the #4 of Daly which operates out of Foyt’s new Indianapolis shop.

Some have assumed that Daly’s European open-wheel experience makes him some kind of slowcoach on ovals. In fact, all he needed was a fast car and a teammate who’s strong on ovals from whom to learn and by which to gauge himself. He now appears to have gained both, so from here on, each race weekend on left-turn-only tracks should be three times as valuable to him.

It’s a reasonable expectation for both Foyt drivers to finish the test in the top dozen.

Newgarden in the Penske mix

Last year at Phoenix, race engineer Brian Campe helped the #2 Penske, then driven by Juan Pablo Montoya, to qualify third and contend for victory until the car picked up a puncture and sank down the order. Josef Newgarden, then at Ed Carpenter Racing, qualified seventh and finished sixth after an eventful race that should really have seen him finish fourth.

Now that Newgarden and Campe are working together, what might be possible? Since PIR last year, Josef has scored his first short-oval win, a dominant performance at Iowa, so there can be no question mark over his ability. And you can bet that Campe – like all Penske engineers – now understands how to optimize Chevy’s aerokit even better than he did 12 or 24 months ago. Expect Newgarden to be right on pace with his teammates.

Has the Andretti Autosport revival started?

It’s a tricky one, because as far as HPD runners go, Andretti looked the best at Phoenix last year – Marco Andretti was the leading Honda in qualifying, while in the race, Ryan Hunter-Reay used opportunism and bravery to start threatening for a podium finish until cautions ruined his strategy.

But it didn’t mean much regarding the season as a whole. RHR was a prime victory contender at Indy and Pocono but was rarely a frontrunner elsewhere, in what was a desultory season for the AA team.

If Andretti produces the fastest Honda cars for Phoenix again this year, ahead of Ganassi’s Dixon and Kanaan, then it’s a feather in AA’s cap, for sure. If that also puts them in the top six in testing, then we can start to be optimistic for HPD as a whole. But what this test won’t do is tell us much about the prospects for Hunter-Reay, Andretti, Alexander Rossi and Sato across the season as a whole. Those kinds of predictions will have to wait until the season-opener at St. Petersburg in four weeks, and the open test at Barber Motorsports Park later in March.

• Live streaming of the Friday and Saturday action can be watched on racecontrol.indycar.com. Test sessions both days run from 1-4pm and 6-9pm local time, and Arizona is on Mountain Time (no DST). For those in the area, Saturday is free to the public, with gates opening at 12 noon MST and with a driver autograph session held between practices.