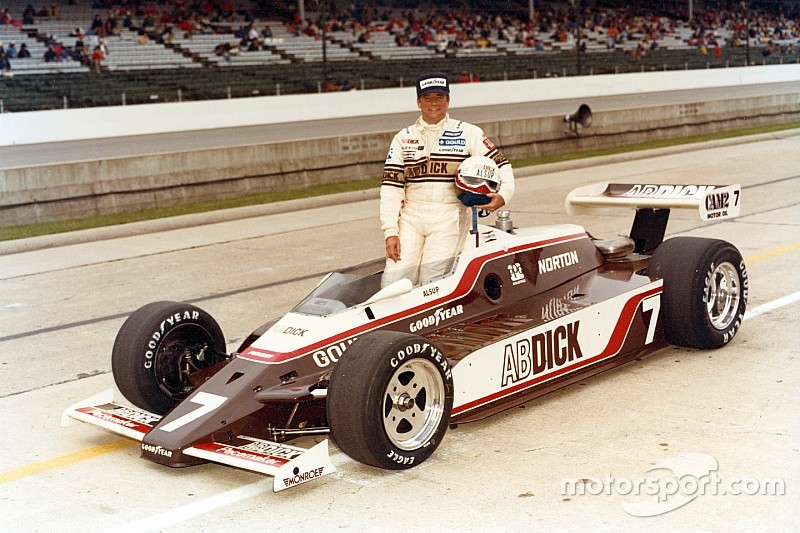 Bill Alsup, who finished runner-up in the 1981 CART Indy car championship, has died following a crane accident near his home in Colorado.

The one-time Team Penske racer was driving a crane up an embankment in Silverton, Co., when it toppled and fell on him, according to the Silverton Standard. The 78-year-old died instantly.

While it was not unusual for Indy car drivers in the 1970s and ’80s to race well into their 40s, Honolulu-born Alsup was remarkable for not actually making his Indy car debut until he was almost 41.

The 1973 SCCA Runoffs champion went on to win the club’s SuperVee title in 1978 before joining CART for the series’ inaugural season in 1979, following the breakaway from USAC.

Despite driving WASP Racing’s ancient McLaren M16-Offy – a design first used in 1971 and obsolete by ’77 – Alsup accumulated six Top 10 finishes, which was enough to become CART’s inaugural Rookie of the Year.

Yet Alsup’s most infamous moment of the season came in the Month of May. After unreliability issues with his Offy engine during time trials at the Indianapolis 500, and having tried again in an Eagle, Alsup approached Roger Penske to ask to borrow a Cosworth DFX engine. Instead, The Captain lent him his third car, a PC7, similar to that used by Bobby Unser, since Rick Mears had elected to use (and had taken pole with) the previous year’s machine, the PC6.

Alsup qualified… and was then disqualified by USAC for using Unser’s engine. Penske lodged a protest on Alsup’s behalf, claiming that the punishment was too severe for the crime, but the DQ stood. A late reprieve appeared to be on the cards when Spike Gehlhausen offered Alsup another Eagle chassis, but the Hawaiian crashed on his qualifying run.

Encouraged by his overall season performance, however, for 1980 Alsup bought up the assets of WASP, invested in a by-then year-old Penske PC-7, and finished seventh in the title race – despite again missing the show at Indy. Third place at Mid-Ohio demonstrated his road course skills, with fourth at Pocono being his best oval result.

When Roger Penske landed a new sponsor for this third car in 1981, Mario Andretti – who had previously driven the entry part-time, in between his Formula 1 commitments – was still unable to commit to a full season for the same reason. Thus it was 42-year-old Alsup who got the dream call-up, and while he was no Mario, and only finished the season with about half the number of points as Mears, that was still enough to earn him runner-up spot in the championship. His highlights again came on road courses, nailing podium finishes at both Riverside and Watkins Glen. And yes, he finally made it onto the Indy 500 grid, starting the race in a commendable seventh and finishing 11th.

Although Alsup was released by Penske at season’s end, he took a PC9B back to his self-run team and clocked 11th in the 1982 title race.

The following season, he switched to an Argo chassis briefly, before reverting to his Penske for a couple of rounds and then a March 83C. But his season was dogged by unreliability. Of the eight races Alsup contested, he finished just one, the finale at Phoenix. And ’84 was even more frustrating, as he failed to qualify at Long Beach and Phoenix, before dragging the Argo to three more finishes. At season’s end Alsup retired.

The Silverton Standard described Alsup as an “active participant in countless community events,” and that his extensive volunteer work led to him being voted Citizen of the Year in 2002.

Among his activities in the area, Alsup was a member of the Silverton San Juan Volunteer Fire Department and following news of his death, the department’s flag flew at half-staff.

Senna eyes IndyCar but rules out ovals for family reasons