It's a rags to riches story that could only happen in America, and it's a home-grown Hoosier whom is becoming a legend in his own time who has written it.

Forrest Lucas' Lucas Oil Company will be the primary sponsor for the Honda-powered No. 55 Schmidt Peterson Motorsports car driven by rookie Tristan Vautier in the Indy 500 on Memorial Day.

The collaboration marks ten years of partnership between team owner Sam Schmidt and the wealthy Columbus, Indiana-born Lucas, who has made his way from cross-country trucker to mega-bucks innovator in an inspiring story of grit, creativity and self-reliance.

Knowledgeable Indy Lights fans know at a glance the white-bodied open-wheel cars of Lucas and Schmidt with their black and red insignia. Lucas has sponsored the No. 7 Indy Lights entry for multiple championship drivers in the developmental league. His cars have captured the Indy Lights Freedom 100 on Carburation Day, the most coveted trophy in that series.

"We use race cars to get people to look at our products," said Lucas. "In 1990 one of our customers and his son were racing sprint cars. For $500, we painted Lucas Oil on his car and started marketing through motor racing."

Lucas' Indy 500 experience has come in partnership with Sam Schmidt Motorsports also: this year on the primary entry from the team for rookie Vautier. Lucas first partnered with Schmidt in 1993 when his company served as primary sponsor for the Indianapolis 500 entry of driver Richie Hearn. 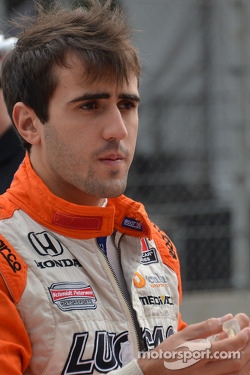 That opportunity came about during the lean years for IndyCar when there was annual uncertainty about whether enough cars would qualify to create a full field in the Greatest Spectacle in Racing. In order to make sure there were 33 cars in the 1993 race Roger Penske lent pole-sitter Gil de Ferran’s backup car to Schmidt for a run. Hearn put the newly-liveried white race car into the 500 by the slimmest of margins and the affiliation of team and sponsor began.

Lucas' rise to prominence in racing has paralleled a successful business career running a private oil-additive and oil lubricant manufacturing company founded in 1989. It was a second start for the 70 year-old Lucas who as a young adult saved every penny he made from driving moving trucks cross-country and parlayed his earnings into a fleet of vehicles.

Lucas' interest in long-distance running gear emerged as a by-product of the needs of his trucking company, which he eventually sold to concentrate solely on oil products for trucks, boats, motorcycles and race cars.

"We are already looking 10 to 20 years ahead," he said. "We've been working with some IndyCar teams on light-oil formulas and friction-free greases."

The company's sponsorship activity spans NASCAR and IndyCar deals, hydroplanes, drag racers and dirt racers--the latter even bearing the company's name as title sponsor. Lucas' biggest sponsorship deal is with the Indianapolis Colts football stadium in downtown Indianapolis. Recently the company has moved into television in an effort to generate its own programming about its racing prowess and, of course, promote its 200 products (mostly lubricants and additives) to fans.