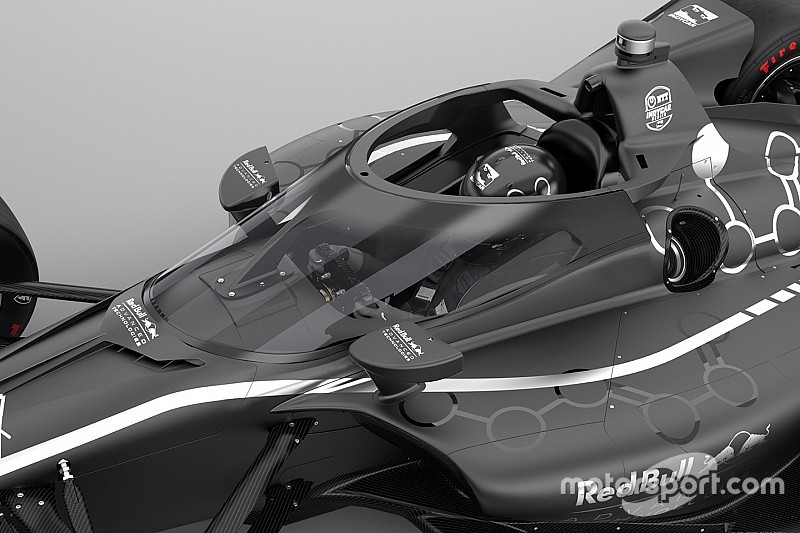 IndyCar president Jay Frye says that although the true “litmus test” of the new-for-2020 Red Bull Advanced Technologies Aeroscreen will come from on-track testing, he doesn’t expect it to cause problems in the driver extraction process, nor insurmountable handling difficulties for drivers and engineers.

Following observations made by Will Anderson, Arrow Schmidt Peterson Motorsports’ race engineer, regarding the significantly altered setups that will be required for IndyCars as a result of the aeroscreen installation, his views were strongly reinforced by another race engineer who wished to remain nameless. He told Motorsport.com that Anderson had been somewhat polite in underplaying the potential problems.

Said engineer suggested that the driver meeting at last weekend’s race in Gateway had resulted in them expressing enthusiasm for the titanium ‘halo-type’ framework that Red Bull [RBAT] has developed for the screen, while concluding that the screen itself could cause (1) issues in terms of driver extrication in the event of an accident, and (2) such significant weight distribution and center-of-gravity shift upward that it would “abuse” the right-front tires on ovals and both front tires on road/street courses.

In addition, the engineer said that teams and drivers alike were worried by the timescale in terms of available track time to address such issues.

Approached with these concerns, Frye told Motorsport.com he understood why there may be worries but stated that he had absolute faith in the aeroscreen, the time that will be made available for drivers to grow accustomed to it and the time available to team engineers to adjust their cars’ setups accordingly.

Frye responded: “Every Tuesday we have a conference call involving about 30 people that include representatives from Red Bull Advanced Technologies, PPG, Dallara, the [yet to be revealed] frame builder – all of them some of the smartest, brightest minds in the motorsports world. We have this great group determined to make the aeroscreen the next generation of safety measure, and we think it will possibly be an industry-changer.

“Once we get it on a car [due to be tested by Scott Dixon and Chip Ganassi Racing in the second week in October at Indianapolis Motor Speedway] we will know a lot more, but until then a lot of this is speculation. Right now, we’re comfortable with where we’re at, we have the right people working on it to ensure it succeeds. And like with the aerokit process, we’ll get it to a certain point and then the teams get hold of it and off they go.

“Of course, there are unknowns but there are probably fewer within IndyCar than within the teams. We talked to the drivers about this after the COTA test in February, then again in May, and next week we should have more details to pass on to the teams and drivers, and these should address some of their concerns.”

Regarding the handling worries and the possible need for wider front tires from Firestone [see the engineering perspective below] Frye commented: “From all the data we collated, there were some options like changing bellhousings or gearbox casings that could remove some weight from elsewhere in the car when we added the screen, but they’d cause more problems in terms of weight distribution.

“About the tires, from what we’ve seen so far – we had a couple of cars test at Texas Motor Speedway [Josef Newgarden for Team Penske, Graham Rahal for Rahal Letterman Lanigan Racing] with simulated ballast and weight distribution as if the aeroscreen was on the car – and it doesn’t appear that anything like [wider fronts] will be needed. We don’t think things will be that drastically different.

“We’re going to have two or three more tests in October with multiple cars, and by Christmas we’ll have enough aeroscreens so that all teams have at least one, but actually we’re hoping that every entry will have one. Obviously we’ll adjust the offseason testing schedule, so there’s a lot more in January. I think we’ve made a good plan.

“I mean, sure, there are always things that can crop up, but that’s why we have very smart people involved anticipating those. And once the teams are able to get more engaged, that’ll be even more brains on the project, and you’ll see things improve even more rapidly, just like what happened with the aerokit.

“We appreciate that there’ll be concerns in the paddock, but hopefully they trust our process; it’s similar to what we went through with the aerokits. The difference is, that was a more isolated situation whereas this involves a broader group. Look at Red Bull: they already had this piece built, they had already track-tested it, and then we just asked them to modify it for our cars because our frame is different.

“And by the way, the titanium frame we’ll be using has to be seen to be believed. I mean, it’s NASA-level of technology in terms of lightness and strength; I can’t wait for that to be announced so we can show it to everyone.”

Frye emphasized the thoroughness with which the team had approached the development and installation of the aeroscreen – and analyzed its possible consequences.

“Primarily we’re installing this piece to reduce the likelihood of cockpit intrusion from debris in an accident,” he said. “Why? Because our athletes’ safety is the prime concern we’re addressing here. So obviously everyone involved did a lot of research to make sure that installing this safety measure didn’t have an unintended consequence, causing a different safety issue like making driver extraction more of a problem.

“So our AMR Safety Team has already practiced on the piece in terms of driver extraction, and they don’t think it’s going to be any different from what they’re doing now. There are several options for how they can extract the driver, and in fact the way the framework is laid out, there is actually more leverage for lifting a driver from the cockpit in that kind of scenario.

“The amount of work that has gone into this thing is off the charts. It’s been intense, no stone has been left unturned.

“So like, driver cooling – that’s been addressed with those vents ahead of the aeroscreen that we’re hoping will include a device so the driver can direct the air either up around his helmet, in his middle, wherever he wants.

“The wet race scenario… Well, the aeroscreen will dissipate rain over the driver instead of coming into the cockpit, but we’re also looking at an option regarding heating filaments in the screen to prevent misting. We still need to finalize what we do about tear-offs on the screen, so a crew guy can clear the screen during a pitstop by just removing a tear-off, like drivers do with helmet visors at the moment. They’ve been using windshield tear-offs in NASCAR for years.”

While Frye understood teams’ concerns, he insisted that was more due to a fear of the unknown, and that the positives of the aeroscreen would far outweigh the negatives initially perceived to exist.

“Look, the drivers, the engineers – they’re all going to see it as different,” he said. “And it is, obviously. But it’s like when we put the AFP device on the car [the ‘shark fin’ in front of the cockpit that will also form the root of the central spar for the aeroscreen frame]. It bothered a couple of drivers at first because it’s in their sightline, but a day later they weren’t mentioning it because they’d already gotten used to it. And in the [Lap 1] Pocono shunt couple of weeks ago, we saw the AFP in action, possibly deflecting a piece of debris away from Hinchcliffe’s cockpit.

“So obviously when we test the car at IMS with an aeroscreen, that’s going to be the next step in evaluation. You want to get it on a car, get it in the real-world scenario. Data doesn’t drive; drivers drive, and so my inclination is to trust the driver rather than the data. That will be the real litmus test.

“But I believe we’ve done – we’re doing – everything to make this a smooth transition. It’s a huge project, but ultimately another one of those changes that drivers get used to, teams adapt to – and something that is a huge benefit to drivers in terms of safety.”

With the recent announcement that the next-gen IndyCar and the new hybrid-supplemented engines won’t be introduced until 2022, the 2020 and ’21 seasons would normally have seen IndyCar engineers focused on whittling hundredths of a second – and the odd tenth – from the lap times of cars that had almost entirely remained the same since the start of the 2018 season.

However, the introduction of RBAT’s aeroscreen will ensure an upheaval, and the aforementioned anonymous race engineer is concerned, not only by the timescale for converting current team chassis, but for what he considers a fundamental shift in an IndyCar’s dynamics.

“Yeah, the aeroscreen is heavy, very heavy,” he told Motorsport.com. “Firestone did a tire test at Texas with simulated weight and, yep, there was more understeer and that right front tire was abused. Well, Firestone will have to start making 2020 tires soon so if there has to be a complete reworking of compounds and constructions, they need to know ASAP.”

Explaining the nature and size of the handling issues caused by the aeroscreen, the veteran engineer explained: “When you move weight forwards on the car, like you might do with ballast to adjust the balance, it works the fronts harder and offloads the rears to perhaps take better care of them.

“If the aeroscreen was located exactly center of the wheelbase, then the load it would add is equal front and rear. But the screen is much closer to the front wheels.

“Also, that screen is pretty tall to do its job as a safety measure, but that means the weight is high up, which raises the center of gravity height. Obviously c.o.g. height, the width of the track between the wheels and lateral Gs combine to dictate your weight transfer in a corner.

“With a higher c.o.g., more weight transfers off the inside tires to the outside tires. So again you’re adding load to the outside front-tire, even more than you would have done by just moving weight toward the front.

“So now you really have that plowing understeer. Tires have a higher coefficient of friction if you have less load on them, and that deteriorates as you add load. It’s like if you put a stiffer front antiroll bar on – it causes understeer because that transfers load off the inside front which is already lightly loaded and efficient, and it adds load to the outside front, which is heavily loaded and inefficient. All that load means you can ‘saturate’ the outside front tire by exceeding its load limit. That’s when all the grip disappears.”

Asked if there are easy or obvious solutions to this handling trait, the engineer replied: “Well, a wider front tire would be a Godsend – or, maybe swept-forward front and rear wishbones.

“Its all doable. It just takes money and time.”