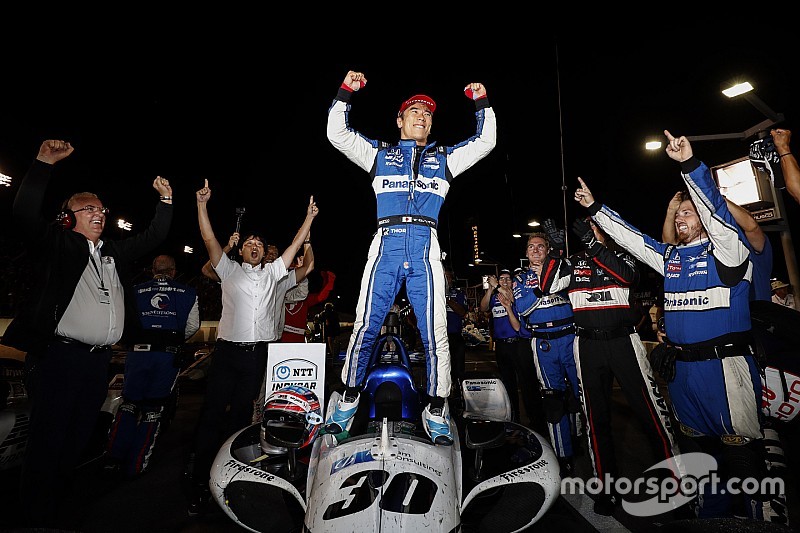 Takuma Sato earned redemption after the Pocono controversy as he came from last to first to score his second IndyCar victory of the year at World Wide Technology Raceway. as most championship contenders came to grief.

Just behind, Sato had to back out of a sandwich situation between James Hinchcliffe and Ryan Hunter-Reay, allowing Felix Rosenqvist, Hinch, Alexander Rossi and RHR to complete the Top 10, as the Rahal Letterman Lanigan car dropped to 13th.

Then out came the yellow for a spin from Marcus Ericsson’s Arrow Schmidt Peterson Motorsports-Honda.

The restart on Lap 5 saw Power move around the outside of Bourdais, who lost momentum as a result to also give up third to teammate Ferrucci, and fend off Pagenaud. Behind Dixon, Rosenqvist made a strong restart to move into seventh ahead of Hinchcliffe, Rossi and Hunter-Reay. Tony Kanaan had also done a sterling job to move up to 13th from 20th on the grid in the AJ Foyt Racing-Chevy #14.

Newgarden’s lead over Power finally hit the 1sec mark on Lap 21 and then stayed at that level, while Ferrucci was running 0.75sec behind the 2014 champion, and 1.5sec up on the battling Bourdais and Pagenaud.

By Lap 35, Newgarden’s lead over Power was out to 2.5sec and Ferrucci was only half a second behind the #12 Penske, and Bourdais was also closing in having extended his gap over Pagenaud to 1.5sec. Sato had another scary moment when he lost his dirty air behind Conor Daly and was the first to pit on Lap 45. His teammate Graham Rahal stopped next time by, as did the two Ed Carpenter Racing-Chevrolets of Spencer Pigot and Ed Carpenter.

At the same time, Newgarden was approaching traffic and was being reeled in by Power, but it was their teammate who was the first of the frontrunners to pit, stopping on Lap 49. Dixon, Newgarden and Rossi followed suit. Power then stopped, leaving Ferrucci in the lead and the rookie set his fastest lap of the race.

Power rejoined the race right behind Newgarden but on cold tires, he got slightly out of the groove on the marble-strewn outside line going into Turn 3, drifted high and went into the wall.

That left Colton Herta, Conor Daly, Ericsson and Marco Andretti holding the top four places, but all needed to stop. It was now Arrow SPM’s other car, that of Hinchcliffe, who had stopped at exactly the right time – just as the race came under caution. That jumped him ahead of Ferrucci who had in turn gotten ahead of Newgarden, Bourdais and Dixon.

Rosenqvist, meanwhile, had jumped ahead of Pagenaud, while Pigot was now ahead of Rossi. As soon as the pits opened, Herta, Daly, Ericsson and Andretti ducked into the pits – but so too did Dixon: his car was losing fluids and they couldn’t fix it in pitlane. The #9 car was dragged behind the pitwall, although there was a delay when Sato pitted again, right behind him.

The restart would see Hinchcliffe with the buffer of Charlie Kimball’s lapped Carlin-Chevrolet behind him but only as far as Turn 1 when Ferrucci sent it down the inside to take up station behind Hinch. Behind them, Bourdais got around Newgarden while Rosenqvist was up to fifth ahead of compatriot Ericsson. Herta dived down the inside of Pagenaud to claim seventh, while Rossi tried around the outside of them both, but it didn’t quite come off.

By Lap 78, Ferrucci was starting to look for a way around Hinchcliffe and the pair of them were 2.3sec ahead of third-placed Bourdais, who was coming under pressure from Newgarden.

Finally on Lap 84, Ferrucci came rocketing off Turn 2 and although Hinchcliffe tried to protect the inside line, Coyne’s rookie levered his way inside before Turn 3 and immediately started pulling away. Within two laps it was over 2sec, five laps later it was over 4sec, and when Hinchcliffe got stuck behind the lapped Foyt car of Matheus Leist, it stretched to more than 7sec.

Pigot, Rahal and then Carpenter stopped just before the Lap 100 mark.

Rossi stopped on Lap 108, title rival Newgarden stopping next time by, and Hinchcliffe on Lap 110, the Arrow SPM driver resuming still ahead of Newgarden. Ferrucci pitted from the lead on Lap 114, took a turn of front wing out, and then Bourdais stopped and was able to jump ahead of Hinchcliffe.

Ericsson, who had just made his stop, slapped the wall in Turn 4, bringing out the caution. That closed the pitlane, stranding Marco Andretti in the lead, and Hunter-Reay also hadn’t yet made his second stop, so when the pits opened they had to come in, along with Ericsson and Pigot and Sato.

So for the restart Dale Coyne Racing were running a legitimate 1-2, Ferrucci ahead of Bourdais, followed by Hinchcliffe, Newgarden, Rossi, Pagenaud, Daly, Rosenqvist, Herta and Carpenter. Andretti had resumed in 11th. Also resuming was Dixon, his holed radiator having been fixed, but now 62 laps down.

The restart saw Rossi pass Newgarden around the outside – possibly crucial for the championship – but then out came the yellow again. Pigot had tried a slightly overambitious move on Kimball, run onto the apron and lost control of his Carpenter car, spinning up into the wall.

At the restart, Rossi dived down the inside of Hinchcliffe, and Newgarden looked like he was falling back under threat from Rosenqvist and Daly, but in fact he surged back to pass Hinchcliffe and started to apply pressure to Rossi. Meanwhile Rossi’s teammate Zach Veach, who had restarted behind the two Coyne cars, unlapped himself from both and got back on the lead lap.

On Lap 150 of the 248, Ferrucci’s lead over teammate Bourdais was half a second, with Rossi, Newgarden, Hinchcliffe, Daly, Herta, Rosenqvist, Pagenaud, running roughly equidistant behind. Pagenaud moved his Penske past Rosenqvist for eighth on Lap 156 but basically everyone was in a 173mph train, as teams were clearly aiming for just one more stop. However, it didn’t seem feasible.

Rossi, Hinchcliffe, Pagenaud and Herta pitted on Lap 174; Newgarden went one lap longer, and emerged well in front of Rossi. Indeed, even Hinchcliffe jumped him, but Rossi took just a lap to depose the Arrow SPM car along the front straight. A couple of laps later, Pagenaud tried to pass as Hinchcliffe moved in anticipation, but Simon then drove Turn 1 too hard and drifted up, conceding places to Herta and Rosenqvist.

Ferrucci and Bourdais pitted on Lap 188, but Bourdais came out ahead as Ferrucci’s crew performed a slightly slow stop, and that allowed Daly’s Carlin car ahead of Ferrucci. However, Bourdais on cold tires made a similar error to fellow veteran Power, drifting high on the marbles and smacking into the outside wall.

Now it was Sato, Kanaan and Carpenter stranded out on track needing a pitstop, ahead of Newgarden, Rossi, Ferrucci, Daly and Hinchcliffe. However, Sato, Kanaan and Carpenter had lapped their chasers who had pitted under green, and so when the pits opened they were able to stop and resume now legitimately 1-2-3 ahead of Newgarden, Rossi, Ferrucci, Daly, Andretti, Hunter-Reay and Rahal. All but Rossi stopped just before the drop of the green flag. That would cost Rossi hugely.

Back to green Sato easily held off Kanaan, while Carpenter firmly rebuffed Newgarden, who initially had Rossi all over him. However, Rossi had to give up fifth to Ferrucci as he was trying to save fuel to make it to the checkers. Kanaan started setting his fastest laps of the race but was struggling to stay within 1.5sec of Sato.

Pagenaud was coming like a freight train through the pack, slicking past Rahal and Andretti in successive laps to move into the top eight and zoom in on the tail of Daly for seventh.

Nearer the front, Sato had only a 1sec lead with 20 laps to go, with Kanaan bringing Carpenter, Newgarden and Ferrucci with him. Daly had dropped 11sec behind, but Rossi’s desperate fuel saving wasn’t going to be enough to get him to the end. He ducked into the pits with 20 to go. That allowed Newgarden to ease off a little, and he put up little resistance when Ferrucci moved past for fourth.

With 10 laps to go, the top five were covered by just two seconds, and Ferrucci’s investigation of the outside line around Carpenter went a little wrong and he slid sideways in the gray and allowed Newgarden back in front.

With four laps to go, Carpenter dived past Kanaan at Turn 1 to claim second and zoomed up to Sato’s tail, but failed by just 0.0399sec to pass him at the line.

Further back, Ferrucci re-passed Newgarden, but when the rookie lost momentum trying to pass Kanaan, Newgarden was able to close back in. Ferrucci got loose in the marbles, dived back down onto the racing line and almost wiped out Newgarden.

The near-clash between them at Turn 4 saw Newgarden squeezed down onto the grass, and spinning. Struggling to select gear or deactivate his anti-stall, he meandered over the line in seventh, having fallen behind teammate Pagenaud and also Daly.

Ericsson uncertain over 2020, but determined to stay in IndyCar

Sato thanks fans, RLLR, media for support after “special” win