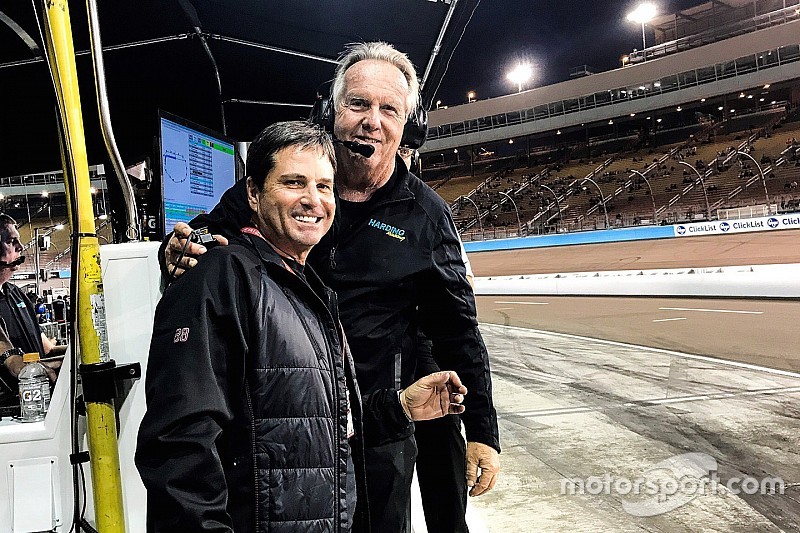 Larry Curry, team manager and director at one of IndyCar’s newest teams, Harding Racing, says that the squad's strong debut outings in 2017 means owner Mike Harding has not yet seen the harsher side of racing.

So far, Harding Racing has competed in only three IndyCar races – and its driver Gabby Chaves earned not only a ninth at the Indy 500 and a fifth at Texas Motor Speedway, but also kudos from rivals and media for getting up to speed so soon.

However, the team has committed to a full season in 2018, again with former Indy Lights champion Chaves at the wheel of the sole entry, and Curry says Harding will suffer inevitable disappointments.

Asked if overachievement in the team’s opening forays into IndyCar had put additional pressure on the team, Curry told Motorsport.com: “The one thing we all know in racing is how brutal it can be.

“If you look in Texas last year where we came through and took fifth place, look what happened to Dale Coyne’s team or Chip Ganassi’s team by comparison. Carnage.

“Well, we’ve all been around racing for long enough that you know that is coming, right? It’s a matter of when, not if. And our owner Mike Harding has not had the experience of going through that kind of brutal situation yet.

“You know, we could go out and tear the front wing off beyond repair in the opening practice at St. Pete. That’s the kind of thing that Mike hasn’t had to be confronted with yet.”

The team whose president is former IndyCar race director Brian Barnhart and whose driver coach is Al Unser Jr. made its first roadcourse venture in testing at Sonoma Raceway last week, and while Chaves was bottom of the time-sheets, that was literally a shakedown test for Harding with the new aerokit.

“Sonoma was actually very satisfying, because beforehand I hadn’t been any more scared about running a new car than this year,” said Curry, a series veteran who ran the Menard's team. “We’d heard horror stories regarding the new Cosworth electronics, that some teams would only get 10 laps into the start of a test before they hit problems.

“Well we did 56 laps and had no problems, even though we as a team had never run Gabby on a roadcourse. So it went remarkably smoothly.”

Curry was initially less happy at the Phoenix open test at ISM Raceway, when Chaves was again last after two sessions on Friday. Even though it was Harding Racing’s first encounter with a short oval, the 8mph gap between the #88 car’s time and Graham Rahal’s top time spurred the team into a complete rethink on setups, that resulted in a move up to 17th out of 22 cars in the final session. Chaves’ best was then 5.7mph/0.54sec off top spot.

“We were all disgusted that we were last on Friday,” said Curry. “I mean, I didn’t expect to end our first oval test threatening the top three or four guys, but last?! Unacceptable.

“But we put our heads together and got after it and at the end of the Saturday afternoon, we hit on something that we thought would take us a step forward, and sure enough it did. So the night session was good. We've learned a lot and we will go forward from here."

Curry says that the slow arrival of parts for a spare car has created some struggle, and that therefore avoiding trouble has been one of the team’s watchwords throughout testing.

“We already feel like we’re behind some of these other teams by two or three weeks,” he said. “It wasn’t because we weren’t ready, but because of the way IndyCar did the parts distribution. If you were part of the Leader Circle system [$1m bonus for each entry that finished in the top 22 in the previous season], then you got the parts quicker, but we only competed in three races last year so we weren’t. We’re at the back of the line.

“So apart from that one day at Sonoma last week, the Phoenix test was the first time we’d run the car. But although we have been hit by electronics issues like everyone else, I think what I’m most proud of is that mechanically, we have had no problems at all. The guys have done an incredible job building and preparing the car.”

Curry also praised Chaves for his composure and team spirit.

“As soon as this project took off, I said, ‘That’s the guy I want.’ He doesn’t seem to get flustered and he has a great attitude. On Friday at Phoenix, Gabby was with us till gone midnight helping us work out what we need to do to improve.

“Gabby’s not the kinda kid who just gets up and leaves like someone has kicked his dog, or starts feeling like we don’t believe in him. He sat in the transporter with us and we worked through everything – everything – and we came back the next day with a plan and it worked.”

Harding Racing will be testing at Sebring on Feb. 27-28, and then again on March 6, before heading straight to St. Petersburg.