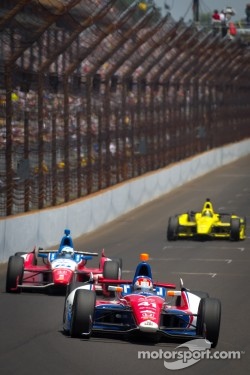 Teammate Mike Conway shared the pain. After giving the No. 14 ABC Supply Honda one of its best runs at Indy since the no. 14 last visited victory lane in 1999, Conway’s great run from 29th to fourth came to an abrupt halt after a pit incident on lap 74.

“It was my mistake coming into the pits, came in a bit too hard and collected some of my guys and that screwed up the front wing and we didn’t realize it till I got out,” Conway said. “Through turns 3 and 4 it felt a little wiggly and I thought it was just tire temperatures but down the front straight when I went down into turn 1, I could see one of the endplates sticking up in the air. I knew it wouldn’t be right turning in, so I tried to back out just going in but I knew Will was close behind me, so I didn’t want to back out too much. The car got very loose which I was able to correct it once but it broke loose again and I couldn’t catch it the second time and then I was just a passenger on board. I’m very sorry for my guys, I’m glad that they are okay. I’m sorry for our sponsor ABC Supply as the car was really good and we were moving up through the field.”

Conway, who started deep in the field, was slicing through traffic with textbook moves and in the early going was the fastest car on the track. By lap 20 he was 15th –in part due to a 7.2-second pit stop on lap 15 when he picked up four spots.

He pitted again on lap 46 for tires and fuel only and by lap 50 he was tenth. He radioed in that the car was getting a little loose by lap 74 when he was sixth, but Team Director Larry Foyt told him he’d be pitting in a couple of laps. The pit stop cycles had begun and Conway was fourth when he made what turned out to be his final stop on lap 77.

The ABC Supply crew recovered from the mishap, changed tires and fueled the car then sent him on his way not realizing with the melee of downed crew members that the front wing had been damaged. Conway radioed in on the front stretch that he might have an issue with the front wing moments before he entered turn 1. The 200mph lap speed tore the wing to the point that it failed and Conway did his best to gain control but to no avail. He spun in front of Power who hit him, launching the no. 14 into the air and it turned on its side as it rode the wall between turns 1 and 2 before skidding to a stop.

Luckily, Conway and Power escaped without injury from the horrific looking accident and will be ready to test at the Milwaukee Mile this Tuesday.

“We had a great race car and Mike was doing an awesome job,” said Team Director Larry Foyt. “He drove right up through the field which is hard to do here at Indianapolis. The crew did a great job in the pits, we picked up spots every time we stopped and everything was going well – we were in the top 10 and trying to get to the end. It’s a shame what happened in the pits. I’m just glad that no one was seriously hurt, a couple of the boys were bruised. We couldn’t see any visible damage to the car when we sent Mike back out but the wing must have been weakened to the extent that it failed at speed. I hate to see that Will was taken out in our accident but really glad that both Mike and Will were able to walk away from it.”

Cunningham’s race ended in the pits with what was thought to be electrical issues on his No. 41 ECAT/ABC Supply Honda although the team is still analyzing possible causes. Cunningham placed 31st.

Cunningham had moved up to 24th at the start but then dropped back to 28th before the first pit stop on lap 15. He started working his way through the field and was running 23rd when he started experiencing a misfire so he pitted on lap 38 thinking he might be out of fuel --which he wasn’t. Several attempts were made to fix the problem but Cunningham returned to the pits each time and the car was finally retired to the garage.

“It’s heartbreaking. I’ve worked seven months to put this together to find the sponsorship to make a contract with Larry that would work for everyone- with our sponsor ECat and ABC,” Cunningham said afterwards. “We were going forward on the start, and on the one restart we had. The car was solid but we had a mechanical problem with the engine or an electrical issue and the engine wouldn’t go over 11000 rpm so rather than get in the way and potentially ruin someone else’s race, we pulled it back here to the garage.”

Dario Franchitti won his third Indianapolis 500 in a race that saw a record 35 lead changes. Teammate Scott Dixon finished second when Takuma Sato tried an unsuccessful pass on Franchitti and spun in turn 1, hitting the wall. He wasn’t injured. Third through fifth were Tony Kanaan, Oriol Servia and Ryan Briscoe.