Over the decades in motor sports, the safety of the racers has changed and the leader in field is of course the FIA as they set the standards worldwide.

A racing helmet must protect the brain by dissipating energy from high-velocity impact as well as shield the head from penetrating injury. Energy absorption is generally accomplished by the use of autoclave curing — an industrial technique that has traditionally been used to achieve the desired fiber content (resin-to-fiber ratio) and the absence of resin voids to produce light weight and strong compressible components. Autoclave curing achieves this by placing the part under vacuum in an autoclave and then pressurizing the autoclave during the heated cure cycle.

The second essential feature common to high-performance racing helmets has to do with resistance of the helmet to penetrating force. The fatal puncture through the helmet that claimed Formula 1 champion Ayrton Senna's life at San Marino in 1994 is widely attributed to a failure of the driver's helmet to deflect a portion of the front suspension of his Williams/BMW away from the driver's head. 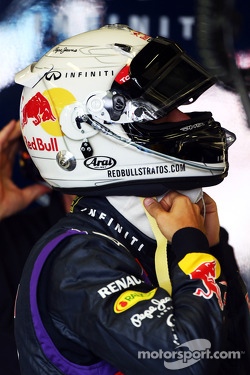 Another pertinent issue in helmet design is the mass of the protective headgear itself. A heavy helmet creates greater force that is transmitted to the neck and shoulders, and in high-speed impact may be sufficient to sheer vertebrae from their ligamentous attachments. A large helmet creates the same bio-mechanical drawbacks. Thus, modern helmets attempt to mimic the anatomy of the user's head as precisely as possible at the smallest possible volume and weight without sacrificing structural integrity.

Practical concerns also dictate helmet design: a racing helmet should be aerodynamic in shape and well ventilated. It also must have other protective elements attached to its structure, such as transparent face visors or goggles or a face cage, and ear plugs and other forms of protective headgear, and a communications system. Racing helmets also generally have expanded protection over the ear, which protects the jaw from injury.

Unfortunately, helmet behavior in testing doesn't always precisely mimic the torsional and direct forces that impact the head during a racing collision. For example, the structure and protective capacity of any helmet is altered during high-energy impact. As such the design and manufacture of protective headgear for automobile racing remains somewhat of an art rather than pure science.

An alternate mechanism of head injury has emerged in the last decade with the widespread use of carbon fiber and other lightweight composite materials as structural elements on racing cars. Springs, shards of shredded body work and other car components are prone to dislodge from the racing tub or the suspension, sending projectiles into the path of oncoming cars traveling at high speed.

The Fédération Internationale de l’Automobile (FIA) has moved beyond the standards dictated in its original 2010 headgear specifications, and now requires a reinforcing sheet of Zylon impregnated with epoxy resin as a secondary shield over the visor portion of the helmet. The reinforcement panel may consist of as little as a single layer of carbon fiber, whose purpose is to assure the secondary shield is completely void-free (apart from cut-outs for ventilation). The updated instruction was issued in May, 2012.

Formula 1 has mandated the thicker face-shield incorporated into the drivers' helmets this season to avoid a recurrence of Felipe Massa's accident at the Hungarian Grand Prix in 2009 wherein a piece of suspension from another car struck his helmet, knocking him unconscious at the wheel.

Racing helmets that meet or exceed FIA 8860-2010 specifications are required for participation in IndyCar and Indy Lights racing for the 2013 season. This minimum safety standard is also pre-requisite for drivers in the Pro Mazda Championship and the USF2000 Championship series. These series have not, as yet, adopted the additional standard for a reinforcing plate over the visor piece of the helmet for additional driver safety.