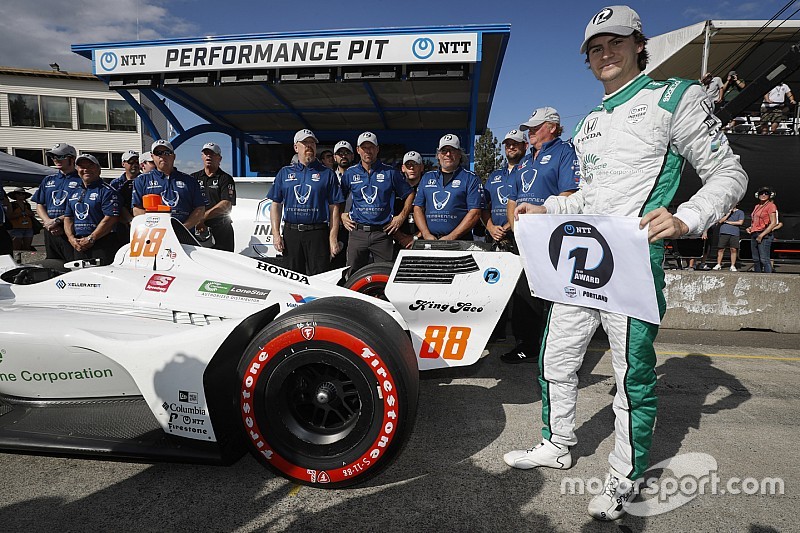 Rookie Colton Herta scored his second pole position of the IndyCar season at Portland International Raceway, beating Will Power and Scott Dixon, but points leader Josef Newgarden will start in the bottom half of the field.

The 19-year-old Herta started the final segment of qualifying on the primary tires, but pitted for the alternate compound Firestones to put in a last-effort flyer to lap the 1.964-mile course in 57.8111sec, an average of 122.302mph.

Team Penske-Chevrolet’s Power elected to go for just a ‘one-and-done’ effort, but after a lock-up into the first corner which flat-spotted his right-front tire – “my fault for not warming the brakes better” – he fell an agonizing 0.0192sec away from claiming pole.

A mere 0.0052sec behind him was the Chip Ganassi Racing-Honda of Dixon, a strong effort after looking strong but not great through the weekend.

Jack Harvey was arguably the star of the session, the Meyer Shank Racing with Arrow SPM-Honda landing an excellent fourth place to beat the second Ganassi car of Felix Rosenqvist by six hundredths of a second and Andretti Autosport-Honda’s Ryan Hunter-Reay by eight hundredths.

Andretti Autosport’s title challenger Alexander Rossi fell 0.0277sec short of making it into the Firestone Fast Six, his only mollification being well ahead of Newgarden and Simon Pagenaud.

Arrow Schmidt Peterson Motorsports-Honda’s James Hinchcliffe qualified eighth, 0.16sec behind Harvey’s best in Q2, and only a couple of hundredths ahead of his temporary teammate Conor Daly.

The Indiana native, who is subbing for Marcus Ericsson while the Swede attends the Spa Formula 1 race with Alfa Romeo, raced for Carlin at Gateway, and will race for Andretti Autosport in the finale. He had never even practiced the Portland track on the simulator before this weekend.

Spencer Pigot, after a tough weekend, clocked a commendable 10th for Ed Carpenter Racing-Chevrolet, ahead of Zach Veach’s Andretti Autosport car, and Sebastien Bourdais’ Dale Coyne Racing-Honda which suffered low fuel pressure on his best lap and had to settle for 12th.

In Q1 Group 1, Newgarden dropped a wheel in the dirt at Turn 8 on what should have been his best lap, and then suffered snap oversteer in Turn 6 on his last chance. In a segment where just 0.55sec covered the 11 cars, those issues consigned him to seventh in Q1 Group 1, and therefore only 13th on the grid.

On the plus side, his closest pursuer on the points table, teammate Simon Pagenaud, was only 18th, having fallen a couple of tenths short of making it through.

There was disappointment, too, for Rahal Letterman Lanigan Racing-Honda, who won last week’s race at Gateway and won this race in Portland last year. Graham Rahal and Takuma Sato will start 15th and 17th.

Marco Andretti of Andretti Autosport and Max Chilton of Carlin Racing-Chevrolet could also consider the qualifying session a disappointment, given their pace through the weekend so far. They will line up 16th and 20th respectively.

O’Ward to stay with Arrow McLaren SP for 2021